A bonus of full timing is that you get to meet people from different places and oftentimes you form lasting friendships and cross paths with those friends quite frequently.  We took our camper to Mesa, which is in the Phoenix area, for some repairs. We knew that our friends, Glenn and Marsha, were camping north of Phoenix in Camp Verde.  We had met them at the Albuquerque Balloon Fiesta in October and have kept in touch with them since then. 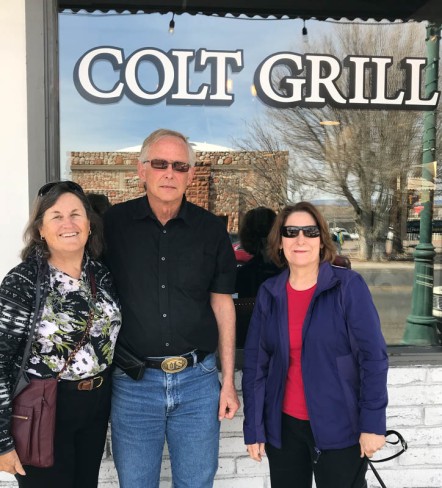 We made a day trip up to Camp Verde to visit them. When we arrived, we spent some time catching up and then drove to a wonderful eatery called Colt Grill in Cottonwood.  This restaurant specializes in smoked meats. David and I agree that their smoked brisket is the best that we have ever tasted. We would definitely go back there again to eat.

After lunch we walked around Cottonwood’s historic district. It has a small downtown area with lots of shops and restaurants.

Glenn and Marsha suggested that we drive over to the small mountain town of Jerome.  Jerome was a booming copper-mining town from the late 1800’s until the 1920’s.  The copper mine there was the largest in Arizona and, at its height, it produced three million pounds of copper per month. Once copper was discovered, the town grew to a population of about 15,000 people. While the demand for copper increased during World War II, it waned afterwards. The Phelps Dodge Mine closed in 1953 and the town’s population declined precipitously.

Today, Jerome is a vibrant artist community and tourist destination and has a population of about 450 people. There are numerous shops, restaurants, and B & B’s located in the historic structures.  Many of the buildings were built during 1894-1899 after fire destroyed much of the town. Notable too is the Jerome Historical Society’s Mining Museum which recounts the history of copper mining in the region.  In 1967, Jerome was designated a National Historic District by the federal government.

After doing some shopping in Jerome, we drove back to Camp Verde via Sedona.  We did not have time to explore Sedona that day.  We will have to do that another time.  We were impressed with the area though.  There’s so much to see and experience in Arizona.

We really enjoyed the day we spent with Glenn and Marsha.  Many thanks to them for showing us some of the sights in Arizona.

Later in the week, we also had dinner with some of our other good friends, Steve and Barb, who live in Phoenix.  We have not seen them since Thanksgiving so it was fun to catch up with them too.

Hopefully, our rig will be fixed soon but the time that we are spending here in the Phoenix area has afforded us time to reconnect with some of our friends and for that we are very thankful.

5 thoughts on “Exploring the Verde Valley”