David and I woke up to another sunny and warm day in Phoenix.  We decided that we really needed to get out into nature for a while after having been in the city for a number of days now.  We thought that South Mountain Municipal Park would be just what we needed and we were not disappointed.  We packed a lunch and lots of water and headed out.

South Mountain Municipal Park is located south of downtown Phoenix and is the largest municipal park in the USA.  The park is more than 16,500 acres and has more than 70 miles of trails.  Originally called Phoenix Mountain Park, South Mountain Municipal Park was established in 1924 when President Calvin Coolidge sold 13,000 acres to the city.  Since then, the city has continued to acquire additional acreage near the park.

There is a lookout at the top of South Mountain called Dobbins Lookout.  It is 2330 feet above the valley floor.  From this vantage point, you can see all of Phoenix and the surrounding mountain ranges.  There is a 2.5 mile one way, 1000 foot elevation change trail called the Holbert Trail that leads to the Lookout.  You can drive to the Lookout via Summit Road but David and I decided to hike to the top.

On the hike, we noticed that there were a lot of fellow hikers on this trail.  The vast majority were headed down and not up like we were.  Many of them were wearing matching Texas Roadhouse t-shirts.  We stopped and talked to one woman who told us that Texas Roadhouse had organized a fund raising hike which benefited the employees who found themselves in financial difficulties.  There were 350 people who chose to participate in this event. The organizers had posted signs along the trail with information about those people who had been helped by this fund. It was heartening to see so many employees who had participated. 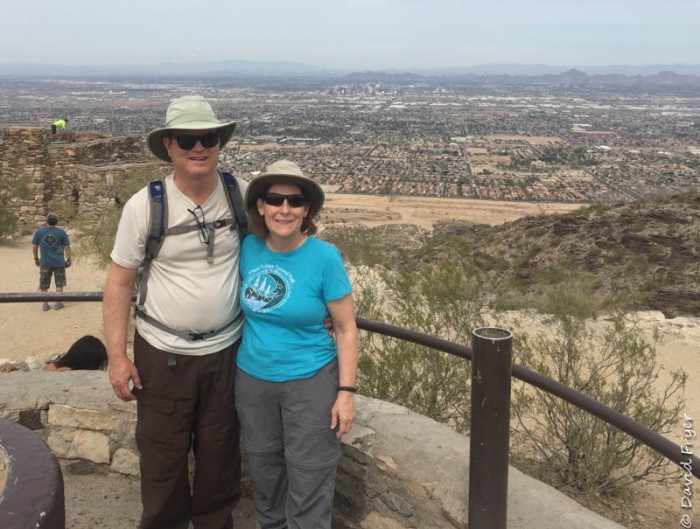 We reached the overlook about noon. There is an open-air stone ramada that provides some shade and is quite cool at the Lookout.  It also affords a panoramic view of the valley.  From our perch, we could see the cities of Phoenix, Tempe, and Mesa below as well as Camelback Mountain, the Superstition Mountains, and other mountain ranges.  It was a glorious view and a great place to have our picnic lunch. 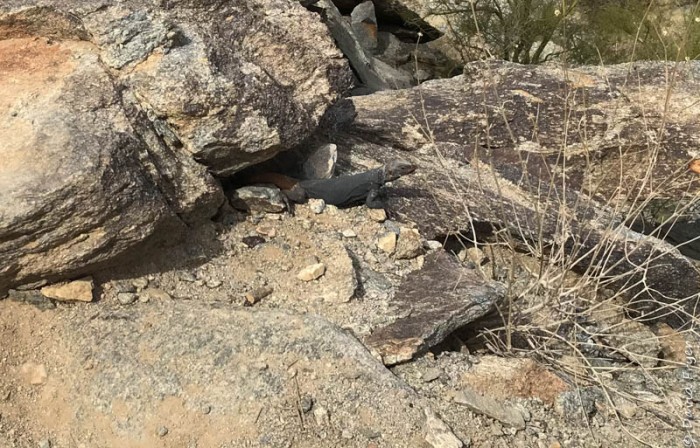 On our way back down the mountain we spotted a male chuckwalla.  The male has a “carrot tail” which is unique to the chuchwallas that live on South Mountain.

South Mountain also offers horseback riding and is a favorite place for mountain biking.  In fact, a mountain biker passed us on the trail on our way down.  I was impressed that he could navigate that trail on a bike!

South Mountain has an Environmental Education Center on site too.  It happened to be closed the day we were there.

We had a great hike and a great day at South Mountain Municipal Park.  We would certainly recommend it if you are in the Phoenix area.

One thought on “High Desert Hike”