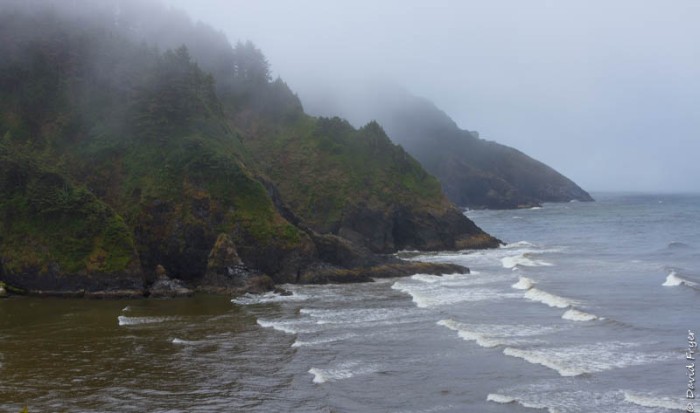 At the last minute, as we were getting ready to leave the beautiful Cascade Mountains, we decided to head toward the Oregon coast. It is something that Celia and I had always wanted to do but we had only managed to take a few day trips from Portland in the past. The Oregon Coast is called the People’s Coast because so much of it is public land. This was codified in the 1967 Oregon Beach Bill by the Oregon Legislature. There seems to be a state park around every corner and the citizens of Oregon take full advantage of these recreational sites.

After a repair stop in Portland, we were on our way to the Pacific Coast. We have learned that as full-timers you have to prepare in advance to have your RV worked on so we had called a month ahead from Arizona to schedule our visit. Even so we had so wait some extra time for an appointment.

We knew that there was little chance of getting reservations at an Oregon State park since they are so busy. We remembered, however, that there are some nice Elks Lodges along the coast and we took advantage of staying at them.

We decided to start in Florence, Oregon and work our way north from there. The Elks Lodge in Florence was full but fortunately they had an overflow area where we could stay. Surprisingly, the Oregon Coast, just like the Cascade Mountains, has cooler weather but with many more clouds. The folks from Portland escape to the coast when the weather turns warm in the city and there was plenty of traffic along Highway 101 to attest to that fact.

We found that there was a lot to do in the Florence area and every day was full during our stay there. We were able to visit two lighthouses and explore several parts of the coastal region. 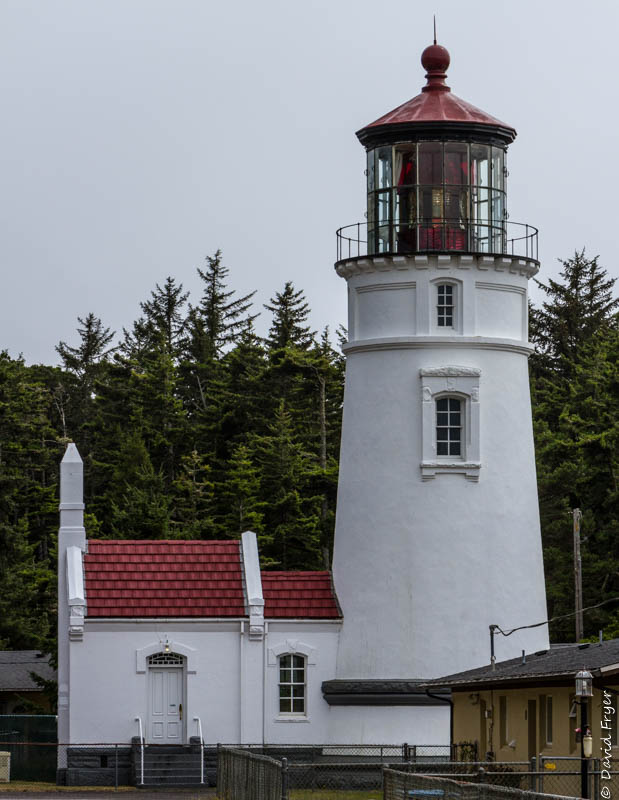 The Oregon Coast has nine lighthouses and two of them are near Florence. We visited the Umpqua River Lighthouse near the town of Reedsport, Oregon first. We tried to time our lighthouse visits in the afternoons hoping that the cloud cover would have cleared by then. It is the Oregon coast so thick fog is frequent in the mornings but possible anytime. Fortunately for us it was not raining.

The first Umpqua Lighthouse was completed in 1857 but it was built on land that frequently flooded. A replacement had to be built and the current building was completed in 1894. The newer lighthouse has a two-ton first order Fresnel lens made in France of 616 glass prisms. The lighthouse has a museum, gift shop, and offers tours. Due to its elevation, the site has a great view of the surrounding area.

From the lighthouse we could hear the roar of dune buggies below and see the large expanse of sand between us and the ocean. What we did not know was that we were looking at the Oregon Dunes National Recreation Area, the largest expanse of coastal sand dunes in North America. These dunes extend along the coast for 40 miles! Some of the dunes are almost 500 feet above sea level and is a wonderful playground for hundreds of OHVers. 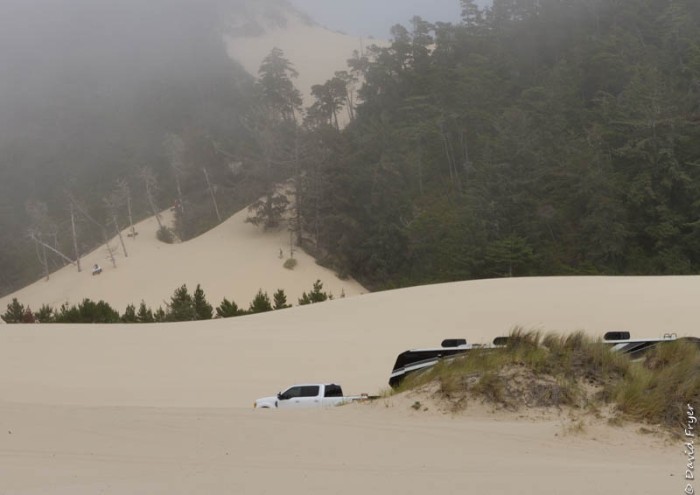 We drove down to check it out. The scene was amazingly interspersed with the fog, wind, and trees. It has to be so much fun to traverse these high dunes in your vehicle and plenty of folks were doing exactly that. 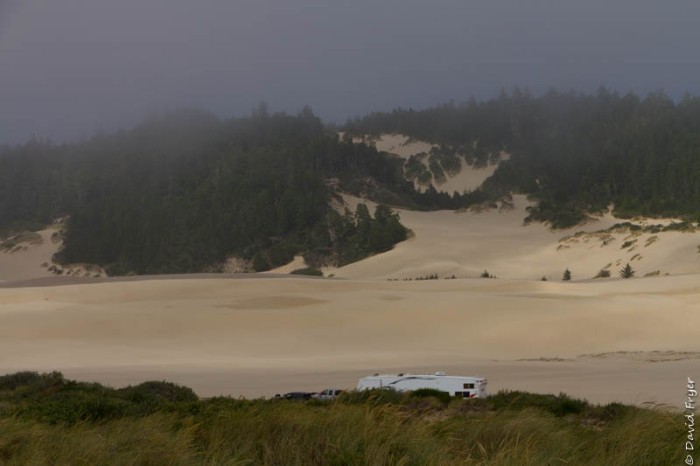 You can even camp in designated spots right on the dunes themselves. I have no idea how they do not get stuck in the very thick sand and can’t imagine pulling the Bighorn into one of these spots.

Miles and miles of the sandy coast are public lands with plenty of access and places to park. For the OHV crowd there are many “staging areas” that are available for off loading your vehicles to explore the dunes. There are also plenty of places to visit the beach as well. 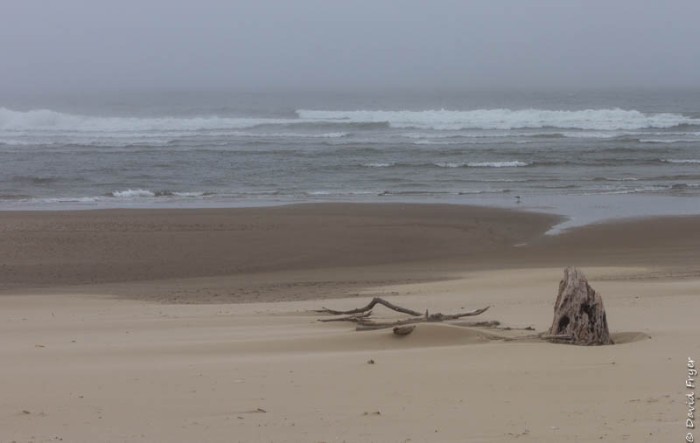 Let me tell you. Visiting an Oregon beach is very different from what you may be accustomed to at other beaches. For starters, having to wear a down jacket at the beach in July is not a real beach, in my opinion. Having to make a fire with driftwood on the sand to keep warm is not a real beach. The locals try to make the best of it and some even have swimsuits on, but it is not a real beach. What it is though, is an amazingly beautiful area and it has a unique draw that thousands can’t resist.

Our next spot to visit was the Heceta Head Lighthouse which is located just north of Florence. This wonderful site turned out to be one of our favorites. There is a large parking lot that leads to a short trail up to the lighthouse. Even though the lighthouse is not open due to Covid-19, there is a good view of the ocean, rocks, and beaches from there.

The Heceta Head Lighthouse was completed in March of 1894 and was powered for years by a five-wick kerosene lamp. The light is amplified by a Fresnel lens containing 392 prisms. The lens is British-made and is the only active Chance Brothers lens in the United States.

If you have visited any of the historic lighthouses you will know that the light keeper’s job was not an easy one. At Heceta Head the light keepers worked in shifts replenishing the kerosene from the separate storage building. Every two and a half hours they also had to crank the 200 pound weight back to its starting position to operate the clockworks that rotated the lamp. 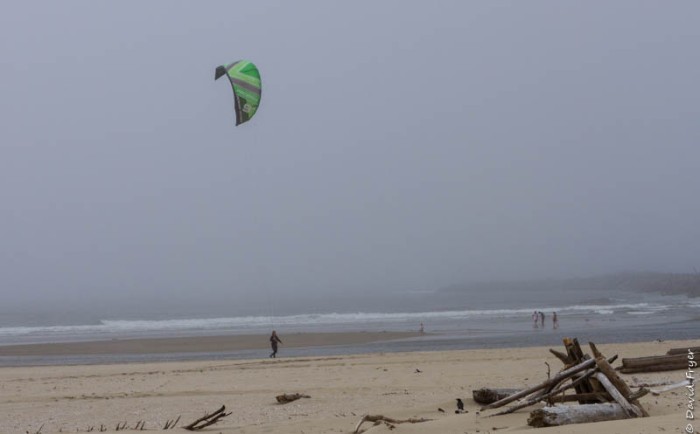 Across the historic bridge in Florence is a large public access area call South Jetty. The jetty protects the large Siuslaw River which borders the town. Put on some warm clothes and you might even be able to catch someone wind surfing.

Last but not least I visited a most usual site of carnivorous plants. The Darlingtonia State Natural Site is a protected bog housing what is called the Cobra-Lily which is a plant that consumes insects. The spot makes for some interesting photos as you can see. 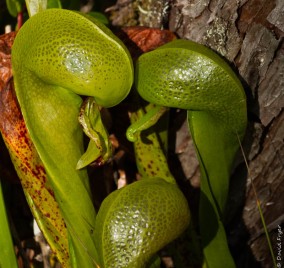 We are happy that we decided to venture over to the Oregon Coast. There are many small towns along the way with plenty to see and do. After spending a few wonderful days in Florence, we decided that it was time to move farther north to the town of Tillamook, which is known for its famous creamery. 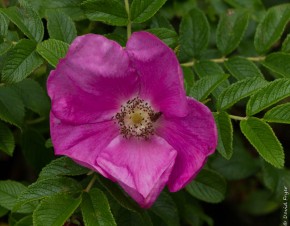 10 thoughts on “Exploring the People’s Coast”

On the East Coast for the Holidays