South of Denali State Park is the little town of Talkeetna. It is the location of an Alaska Railroad stop, the air taxis for Denali climbers, and the park ranger station for those climbing the mountain. The extreme weather on Denali is a true test for climbers, but even so over 1000 register each year to attempt the summit. Of that number, less than half are successful and of this writing only 46 percent have summited this year.

The climbing season is approximately April to June, with the busiest month being June. After June, the warmth of summer creates greater danger from avalanches and widening crevasses. The summer temperatures are typically below zero with winds up to 100 mph possible. Because of the high elevation, climbers take two to three weeks to reach the summit as they need to spend days acclimatizing to the heights and reduced amount of oxygen. Returning from the top takes only three to four days.

Climbers leave from Talkeetna, flying to base camp at about 7000 feet to start their journey. Denali is the highest mountain in North America at 20,310 feet. The ranger station, historical museum, and other locations in Talkeetna have information about climbing Denali and the history of the early attempts to summit it. This is also a great place to go on a flightseeing trip to nearby glaciers. 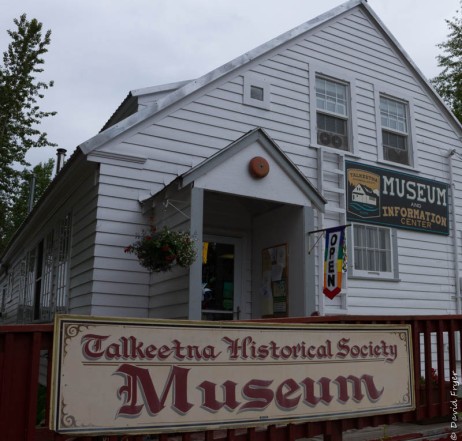 Besides the railroad, ranger station, and airport, Talkeetna has its share of gift shops and eateries. It is a very small town and you can easily walk the few blocks quickly. We found many very friendly folks and glad we made the day trip on a rainy Alaska day.

One thought on “Talkeetna”