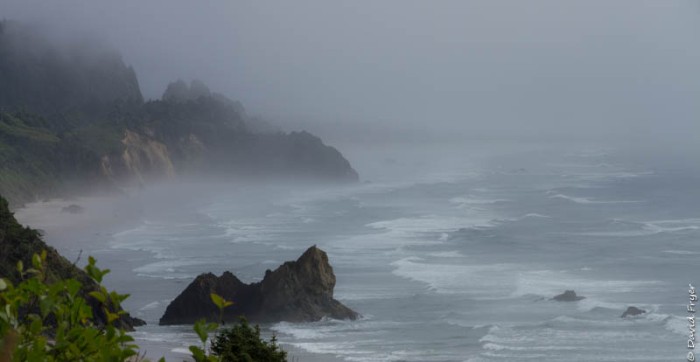 While Tillamook is an interesting town, there are a lot of beautiful areas in close proximity to it. We discovered waterfalls, quiet (and not so quiet) beaches, lighthouses, and scenic highways within an hour’s drive of our campsite. 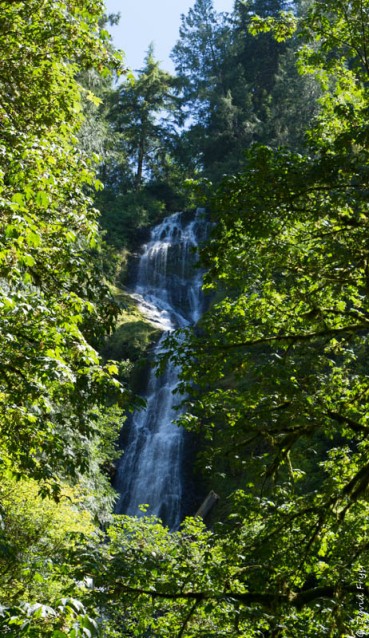 Munson Creek Falls, named for an early 19th century explorer and pioneer, was just a few miles from our campground so we made our way there. The road to the trail head is very rough and has a lot of potholes. I think that the road acts as a deterrent so, while there were some, there were not many people on the trail. The Munson Creek Falls is nestled in the Munson Creek State Natural Site, one of Oregon’s newest state parks. These falls have three tiers and cascade down a 319’ cliff. This waterfall is the tallest in the Oregon Coast range. There is a short half of a mile trail that leads to a viewing area. Unfortunately, due to floods and fallen trees, the trail is closed beyond this point so you cannot reach the base of the waterfall. Even so, the view of the falls and the trail up the peaceful, lush box canyon is worth the effort. Many thanks to our friends Debbie and Wade, who were camped beside us, for recommending this hike to us. 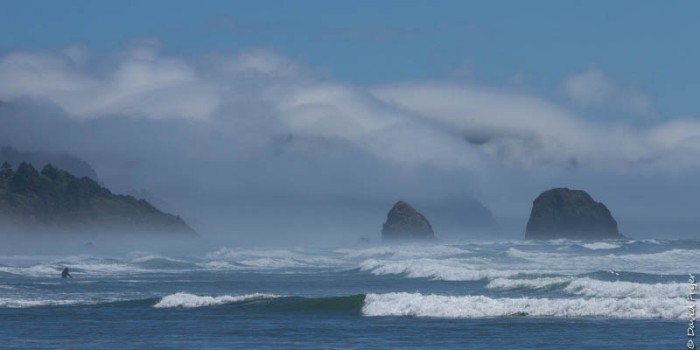 From Munson Falls, we drove the 40 mile Three Capes Scenic Loop. This scenic drive took us along the coast past Cape Kiwanda, Cape Lookout, and Cape Meares. We made our way south on Hwy. 101 and then turned toward the coast and the town of Pacific City. Our timing was not great because we chose to do this excursion on a weekend when everyone was out and about. It was so busy at Cape Kiwanda that we could not find parking and the beach was so packed with people that we chose not to risk being out amongst the crowds due to COVID. So we continued on to Cape Lookout where there were plenty of people too but there was enough room to “socially distance.” As is often the case along the Oregon Coast, it was sunny and warm inland (like in Tillamook) but at the coast it was foggy and cold. That was the case at Cape Lookout. The weather still did not dampen many beach goers’ spirits because we saw many of them picnicking on the beach and playing in the sand. A few even donned swimsuits. We are not sure how they could possibly tolerate the cold water and wind in a bathing suit. The rolling waves were powerful and the beach was mysteriously attractive even if the weather was not ideal. 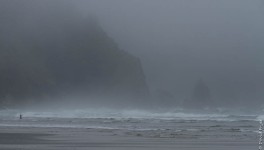 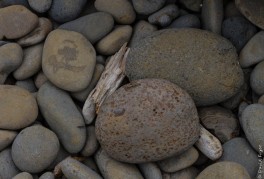 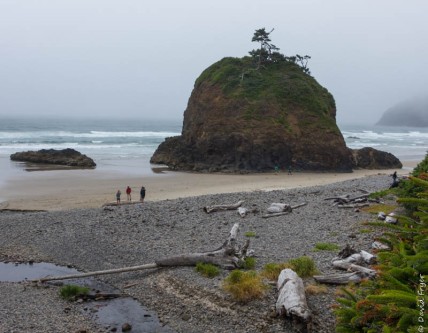 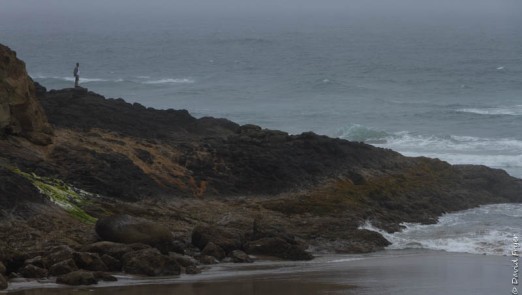 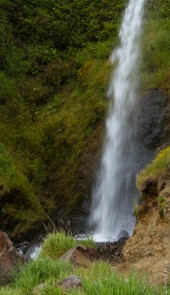 As we made our way to the third cape, Cape Meares, we stopped at Short Beach. In contrast to Cape Kiwanda, there were very few people at this beach or at Cape Meares. The name of the beach does not describe its size but rather it was named for Short Creek that drains into the beach. Short Beach is quiet, beautiful, and somewhat hidden. Like Cannon Beach to the north, it has a prominent sea stack which is protected by the Oregon Islands National Wildlife Refuge. Although it was cold and foggy there too, it was wonderful to walk on the beach, to watch the birds, and to spend some time observing nature. 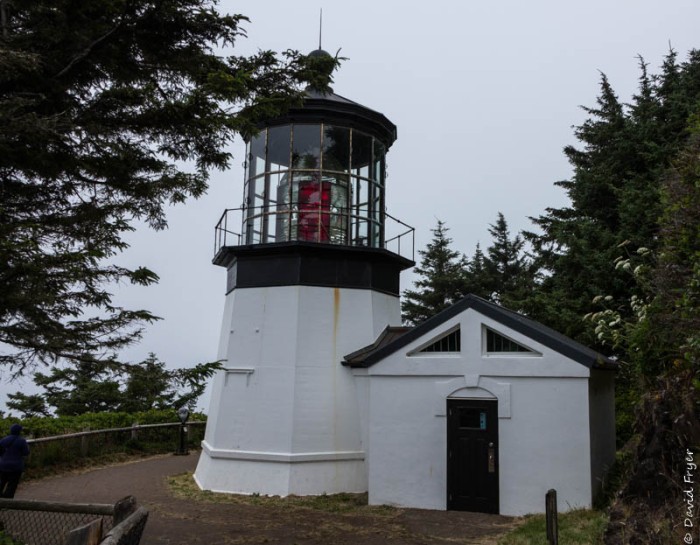 From Short Beach we reached our final destination for that day, Cape Meares. This cape is the site of the shortest lighthouse on the Oregon Coast. It sits 217 feet above sea level but the lighthouse itself is only 38 feet tall. Established in 1890 and named for the explorer Capt. John Meares, this particular lighthouse served to point the way to the Tillamook Bay. Interestingly, the French made Fresnel lens has eight sides and four of them are red causing the beam from the lighthouse to alternate red and white. In addition to the lighthouse, there were two light keeper’s houses and two oil houses built on the precipice. This beacon served the waterways until 1963. The Coast Guard planned to remove the building but the public intervened and the station was given to Tillamook County. In 1968, it became part of the Oregon State Parks Department. 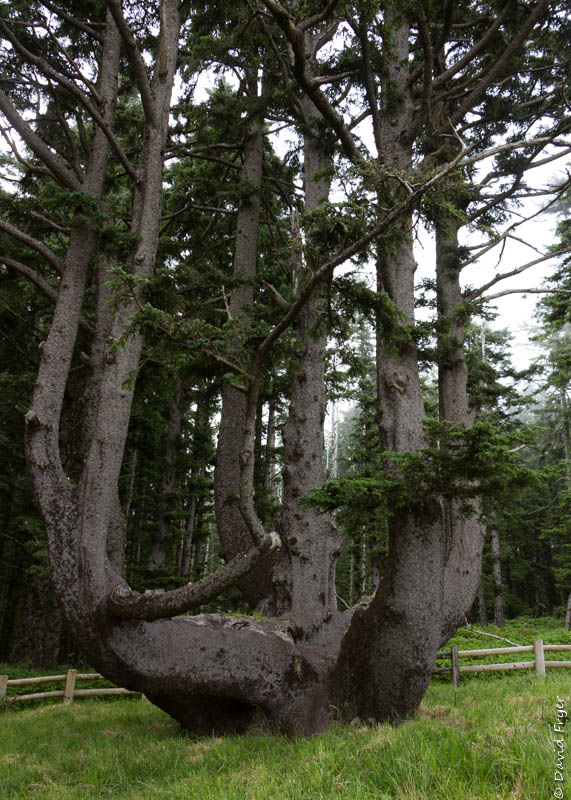 On the same property is the Octopus Tree. This oddly shaped massive Sitka Spruce tree has large branches growing out of its 14 foot base. Its tentacle-like limbs rise 105 feet in the air. To create this shape, it is believed that the limbs were flattened as much as 16 feet from the base when they were young and flexible and then they were allowed to grow vertically. Per the informational sign posted by the tree, this Octopus Tree is more than 46 feet in circumference and is estimated to be 250-300 years old. According to Tillamook tribal lore, this was a ceremonial site and the tree was shaped in this way to hold cedar canoes and other ceremonial objects. The Octopus Tree is one of several “Indian Ceremonial Trees” along the Oregon Coast. It is truly a unique tree, something we had never seen before. 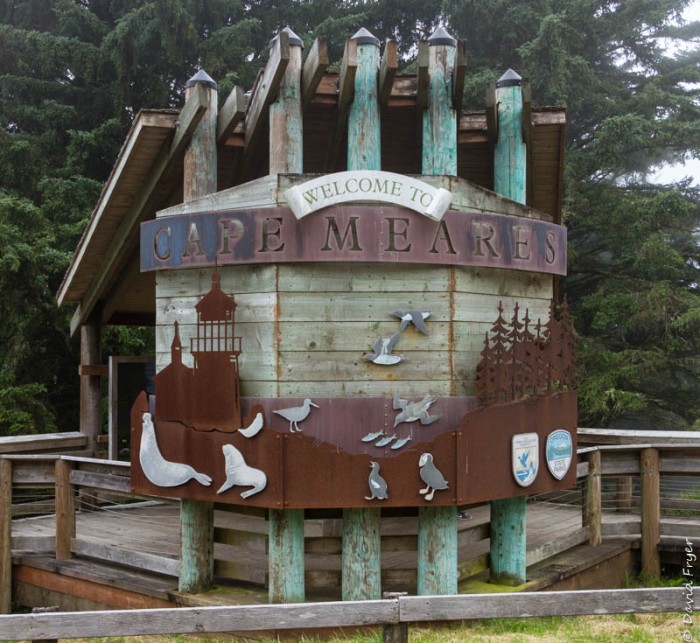 What a fun-filled day exploring the Munson Creek Falls and the Three Cape Scenic Loop. 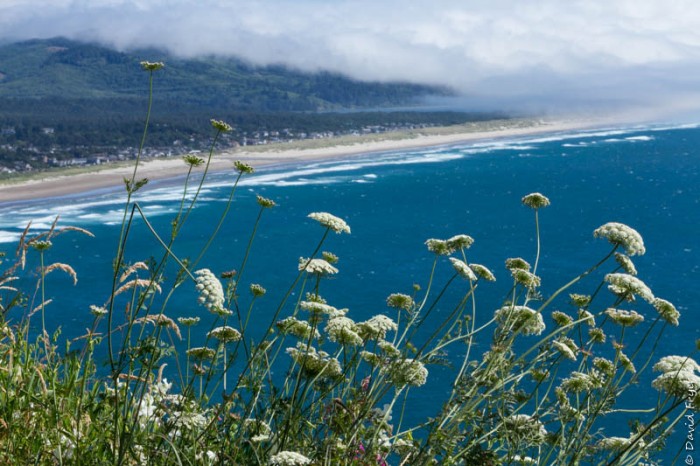 Another day we traveled the Oregon Coast Hwy. to Cannon Beach which is about 40 miles north of Tillamook. The beautiful and picturesque route took us over the Neahkahnie Mountain. Legend has it that in the 16th century, the Spaniards buried a treasure somewhere on this mountain. Many have searched for it but it has yet to be found. This peak, whose name means “the place of god,” rises 1,683 feet above sea level and offers magnificent views of the coast below. 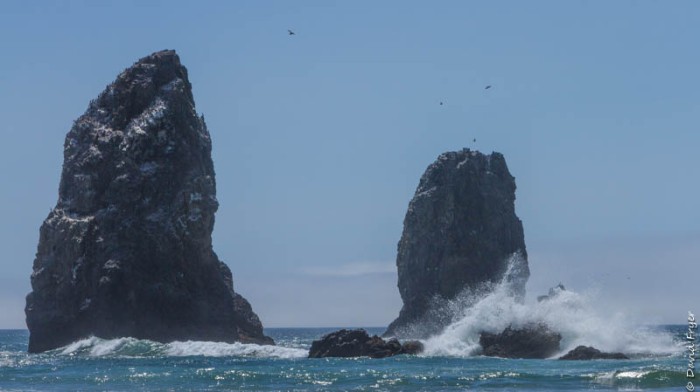 Cannon Beach was originally part of the Tillamook tribe’s land. In 1805, William Clark, of Lewis and Clark fame, visited it. Today this area is a very popular tourist destination. Even with COVID restrictions, there were lots of folks both in town and out on the beach. The town itself has lots of shops and restaurants and there are many cultural events throughout the year that bring people to Cannon Beach. But the main reason many come here is to walk the beach, fly a kite, and see the iconic Haystack Rock and the Needles. 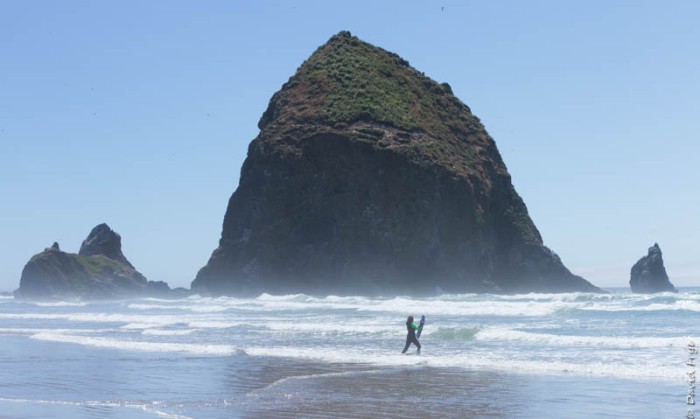 Haystack Rock is a 235 foot sea stack which you can walk around when the tide is low. Adjacent to it are two smaller sea stacks called the Needles. These rocks, Haystack Rock in particular, are home to many sea birds, including puffins. At the foot of these rock in the tidal pools you can often see starfish, sea anemone, crabs and other marine wildlife. National Geographic has called this beach “one of the world’s 100 most beautiful places” and we certainly agree with their assessment. 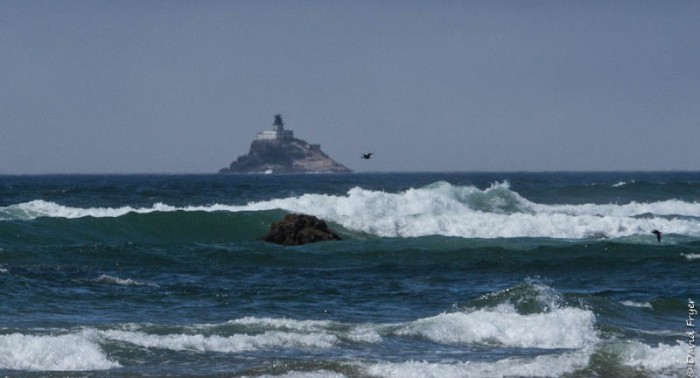 The Tillamook Rock Lighthouse is clearly visible from Cannon Beach. Although this lighthouse is not currently in operation, is has stood on this basalt rock off the coast since 1881. This marine beacon was the most expensive West Coast lighthouse ever built at that time. Its price tag of $125,000 in 1881 is equivalent to $3.31 million today. Originally it was slated to be built on Tillamook Head but there was too much fog there so they moved the site to a rock that was 1.2 miles offshore. After several failed attempts by other builders, the Army Corps of Engineers built it in 500 days. The Tillamook Rock Lighthouse is a 62 foot high tower set 130 feet above sea level. Even after its construction, this northernmost lighthouse on the Oregon Coast continued to encounter difficulties. The poor weather conditions and the perilous commute to and from the site earned it the nickname, “Terrible Tilly.” During its years of operation, many storms damaged both the lighthouse and eroded Tillamook Rock. These setbacks prompted its closure in 1957. Today it is privately owned and it is on the National Register of Historic Places. 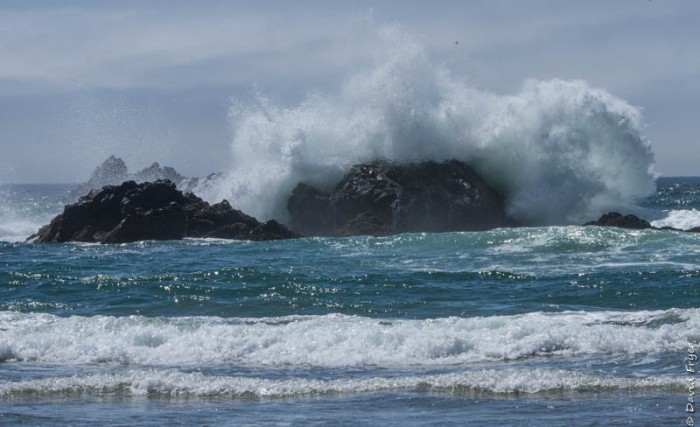 The Oregon Coast, thus far, has not disappointed. Over the past week, we have seen 5 lighthouses, enormous sand dunes, fabulous oceanscapes, unique flora, and amazing views of a passing comet. We have also learned about some of our U. S. heritage and sampled some Oregonian good eats. We can’t wait to see what else this coastal region has in store for us as we make our way farther north to Astoria, Oregon.