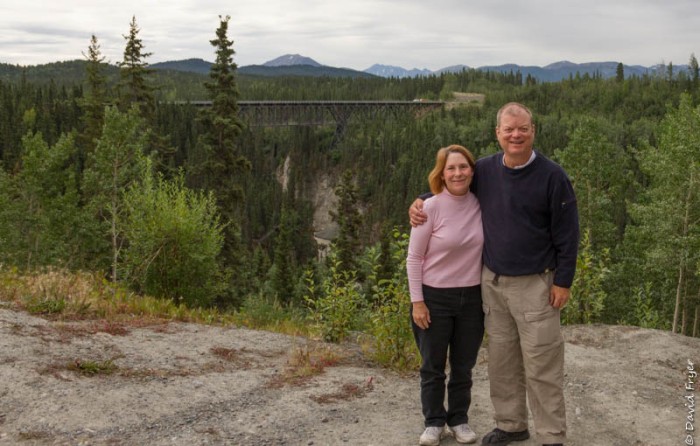 What is the largest national park in the U.S. parks system?  You guessed it, Wrangell – St. Elias National Park. As large as Yellowstone National Park is, it would take six of them to equal the size of Wrangell – St. Elias. There are four major mountain ranges that are found in the park and it includes 9 of the 16 highest peaks in the US. At least four of the large peaks can be seen from the highway from Valdez, but we drove by twice under overcast skies and could not see them. The pictures that we have seen of these mountains are so impressive and it makes you want to return just to see them. If you look up Blackburn, Sanford, Drum, and Wrangell mountains on the internet, you will see what I mean. Over 5000 square miles of the park is covered by glaciers which is about 60% of all the glacier ice in Alaska.

As Celia mentioned in our previous post, the drive from Valdez to Glennallen is incredible. It is as beautiful as any in Alaska. There are very few buildings, towns, or people along the way and you quickly learn to get fuel and supplies when you can. We made our way from Valdez to the “town” of Kenny Lake. It does not have a post office but it does have an elementary school and the Kenny Lake Mercantile.

The Kenny Lake Mercantile is a typical “roadhouse” facility found in Alaska that has a little bit of everything for the visitor and the locals. On this road to the interior of Wrangell – St. Elias, the Kenny Lake Mercantile has a gas station, grocery, laundromat, a few rooms, grill, ATM, and spaces for RVs. This gas station is the only one for many miles. They do have hookups for the campers but the “dry” sites are much cheaper so we picked one which was in a beautiful wooded setting.

The couple running this year-round facility are delightful and you quickly realized that this is a key location for the community. The local population relies on this mercantile. Since so many cannot afford a well for their homes (we were told that it costs $100 a foot to dig a well), they truck in their own water. It is common to see large tanks in pickups for transporting water back to your house. That explained the large number of machines in the laundromat. This facility was important for the community, not just the campground. 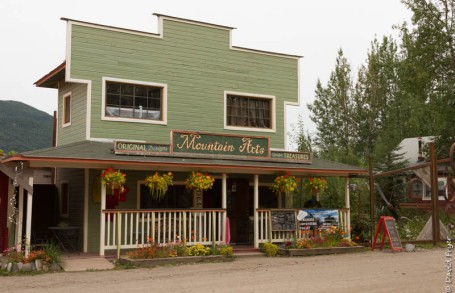 One of our “bucket list” goals was to visit the town of McCarthy and visit the abandoned Kennecott Mine. The McCarthy Road is 61 miles of gravel built on top of the abandoned railroad bed used for the Kennecott Mine. It takes about three hours to drive the road, one way. Flat tires are common and it is slow going. While people make this trip every day, we discovered that there is a shuttle service out of Glennallen that would pick us up from our camper and take us to McCarthy. We could have left the Bighorn in Kenny Lake and driven ourselves, but we opted for someone else to do the driving. It turned out to be a good move. Our driver was great. He really helped us understand the local lifestyle and what it was like to live in the region. Originally from New Jersey, he is homesteading in Kenny Lake year round. 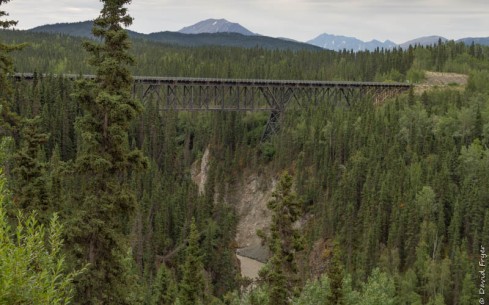 The road itself is an adventure. While dodging potholes, going through flooded roads (courtesy of beaver dams), and crossing vintage railroad bridges we made our way to the remote McCarthy village. The Wrangell – St. Elias National Park is somewhat unique in that there exists a significant amount of private land in the park. The town of McCarthy is on private land, not federal land, and there are a number of homes in the surrounding area. We even saw some “For Sale” signs along the McCarthy road. The park acquired the available land but did allow owners to keep their property and sell to others in the future.

Once you arrive at the Kennicott River, there is no road across to McCarthy or Kennecott. I realize that I am using two spellings for Kennicott and no one is sure why they are different. Usually the mine is spelled with the “e” and the natural features, like the river or glacier, with an “i”. There is a National Park footbridge across the river that you cross to a shuttle service that takes you on to McCarthy or the Kennecott Mines. I asked the driver how the vehicles got to McCarthy, and he said they are driven over the river in the winter.

Don’t get the impression that McCarthy is a large town. It has few streets and about a dozen buildings. Several cater to tourists offering a place to stay, a restaurant, and a small bakery/espresso shop. The town is somewhat unique in how remote it is. One item we were told is that the townspeople don’t throw anything away because it is a four hour drive to the nearest waste transfer station! How is that for taking out the trash? At least the mail is flown in twice a week and whoever arrives first to the airstrip gets to sort the mail. 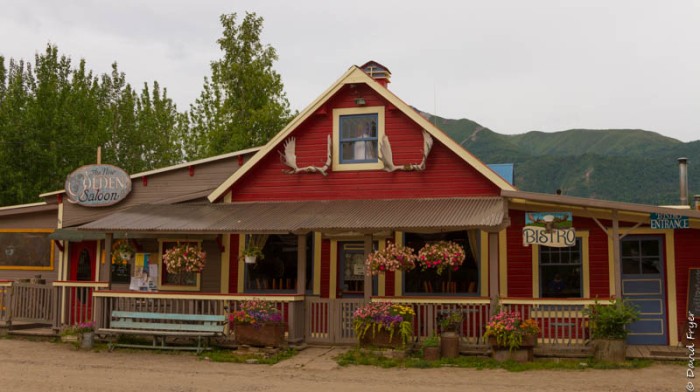 We stopped in McCarthy for less than 30 minutes and were ready to shuttle on to Kennecott which is about five miles away.

The shuttle dropped us off at the entrance to the relatively new Kennecott Mines National Historic Landmark (1998). The mine was abandoned for many years and slowly Alaskans homesteaded in the area. There are numerous private homes on the ridge in Kennecott. The facilities can be explored by yourself, but it is worth springing for the guided tour ($28 per person). The tour company has sole access to some of the historic buildings that are locked to the public. The tour is over two hours long and provides extensive detail as to the history, facilities, and the people of the Kennecott Mine.

The Kennecott Mine opened in 1900 in this very remote area that is about five miles from its supporting town of McCarthy. It has an extensive history and a successful one. By 1938, the year that the mine closed, there were over 100 buildings in Kennecott. By the time it closed, the mine had produced up to $300 million dollars of copper and silver. 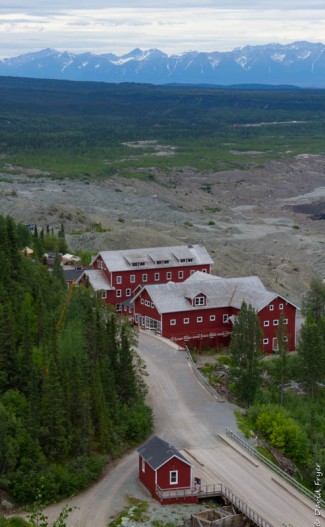 The infrastructure is quite impressive. The most amazing part is the transportation developed for the mine output, the Kennecott Copper Corporation built the railroad from the port of Cordova. The 196 mile railroad required 129 bridges through this rugged terrain. The challenge of building this railroad has been compared to the building of the ALCAN Highway. The Copper River and Northwestern Railroad (CRNW) was completed in less than four years with up to 6000 people employed in the effort. The challenge was so great that the joke was that the railroad should be named the “Can’t Run and Never Will”. Nevertheless, the first run of the train brought a quarter of a million dollars’ worth of ore to the port of Cordova, destined for Tacoma. This alone justified the $25 million dollar railroad construction investment by the Guggenheims and J.P. Morgan. 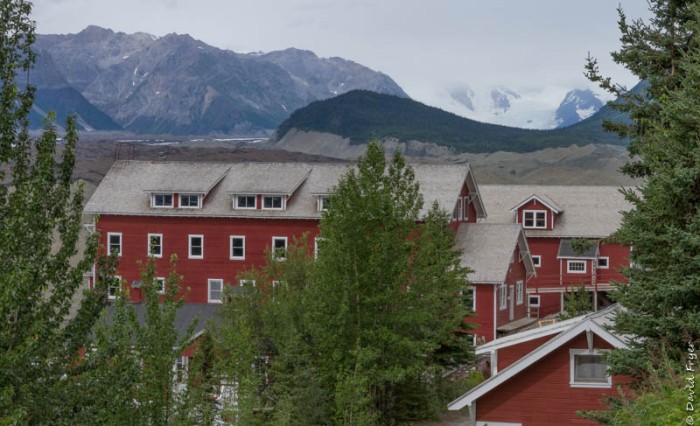 The Kennecott Mine complex was a company town and the barracks style housing is still visible. In its heyday, the town housed several hundred residents, post office, a school, and even had a hospital. The medical facility had the first x-ray machine in the Alaska territory. The railroad allowed for a substantial flow of people, equipment, and goods to this remote area. As you can imagine, the train was the only means of transportation. In 1938, with rising costs, dwindling ore deposits, and falling copper prices, the mine and railroad were abandoned. The townspeople were given 24 hours to get on the last train out or walk out! Furniture, housewares, equipment, dishes, etc. were left in place as everyone fled as fast as they could.

Our preference would have been to spend a night or two at the Kennicott Glacier Lodge, but they did not have rooms available. The lodge is in the Kennecott Mine area and is a restoration of the original building. We did have a wonderful lunch there that was as good as any we have had this summer and was reasonably priced. 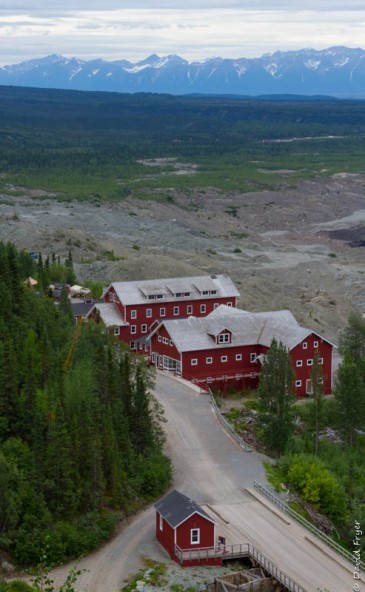 One thing that we also wanted to do but did not have time to do, plus it was a very overcast day, was to hike to the Root Glacier. The foot of the glacier is about a two mile walk from Kennecott Mine. While there are guided tours, you can walk the glacier yourself, crampons recommended. A large expanse of glacial ice borders the Kennicott valley, but it is covered by a thick gray moraine. The “white ice” is farther up the trail and would be a great hike. That’s the great thing about Alaska, your “to do” list just keeps growing instead of shrinking. 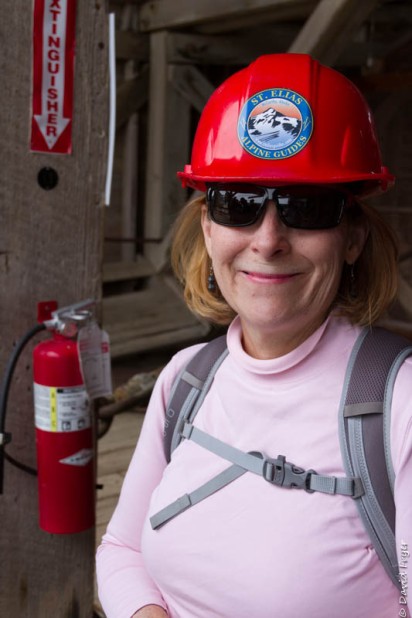 If you go, here are some things to consider:

You can drive the McCarthy road, just take it slow. There were plenty of vehicles that did, even some RVs. You do need to be prepared to change flat tires. Our driver admitted that one day he had three flats on the trip. They cache spare tires along the way for emergencies! The worst conditions are when the road has been recently graded and the old railroad spikes emerge. We had no problems and saw only one vehicle with tire issues.

There is only one other access road into the Wrangell – St. Elias National Park and it is much farther north via the Nabesna Road. This road does not go to the McCarthy or Kennecott area.

There is a small airstrip in McCarthy and visitors take advantage of that. It is possible to fly from Chitina (another very small town at the end of the paved road) to McCarthy. The same companies offer flightseeing and taxi service to public use cabins within the park.

The National Park Visitor Center is near Glennallen, AK which is about an hour’s drive from Kenny Lake. We stopped by there and the rangers were very helpful and gave us lots of information about the Wrangell – St. Elias National Park.