While we were traveling through the southwest portion of New Mexico we stayed in Deming.  There is not a lot to do in Deming but there are numerous RV parks and we discovered that many people including our next door neighbors were here to visit Mexico which was less than 35 miles from our location.  They go to get dental treatments such as cleanings, root canals, etc. in a border town.  They also can purchase inexpensive medications without needing a prescription. Apparently it is very easy as you just park at the border, walk a few city blocks to numerous dentists and pharmacies, then easily return to your car. Besides visiting Mexico, several people there recommended that we visit the City of Rocks State Park.

Rising out of the mostly flat desert floor is the City of Rocks which consists of monolithic boulders that reach for the sky.  These rock formations stretch upward as high as 40 feet.  Geologists believe that these rock columns and pinnacles were created by a volcanic eruption many millions of years ago.  Over time wind and rain sculpted them into these unique cluster of rocks.  These formations are known to exist in only six other locations in the world. The City of Rocks State Park, founded in 1953, protects a very unique landscape.

The Mimbreno Indians lived in the area between 750-1250 AD.  There are a number of places in the rocks that were used to store water.  These “wells” were critical to the Indians’ survival. Pottery and other artifacts have been found in the area and can be viewed at the new Visitor Center.

One of the most interesting things to do is to walk and hike through, over, and around the rock formations.  As the ranger told us, “It’s easy to get lost in there.”  We didn’t actually get lost in the City of Rocks but we did feel like we were in another world.

Another interesting feature of this park is that you can dry camp in and among the big boulders.  The campsites are nestled right up against and among the rock formations. (The Park also has a few W/E sites but they are removed from the pinnacles and boulders.) Each dry campsite has been given the name of a planet or a constellation.  This park is a great place to view the heavens because of its dark night sky.  The park also has a 14 inch telescope on site. In addition to the landscape and the night sky, there is a small desert botanical garden and several picnic areas. 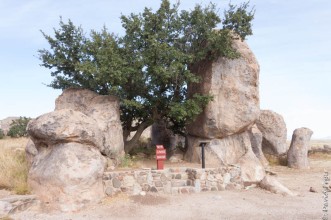 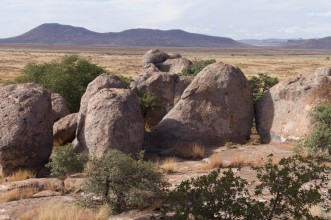 We really enjoyed exploring the City of Rocks; it is definitely worth a visit if you are near Deming or Silver City, N.M.