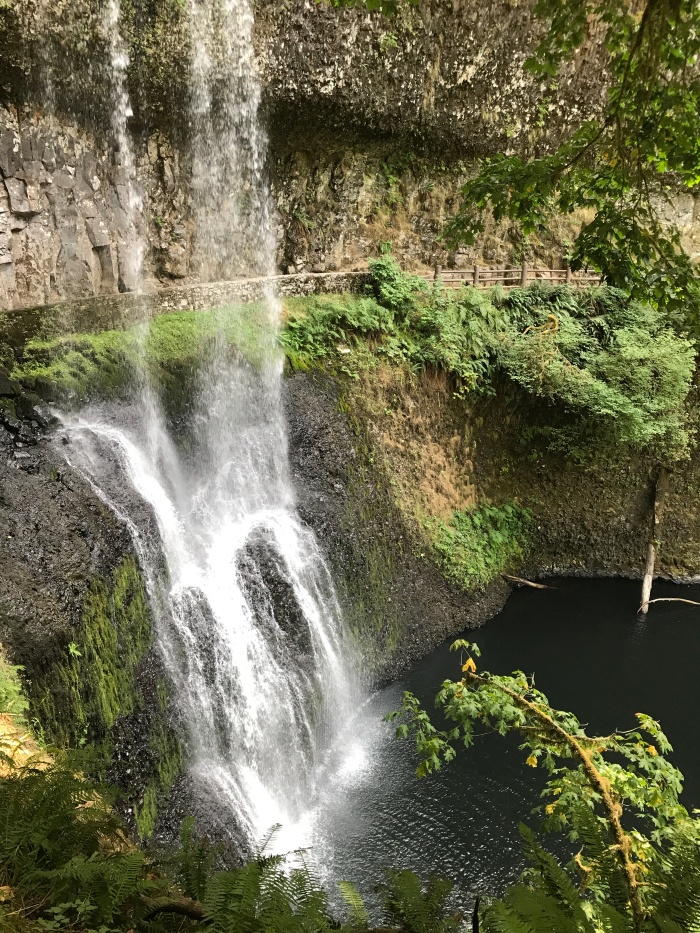 On Wednesday, Celia and I traveled to Silver Falls State Park, the largest of the Oregon state parks.  It is famous for the Trail of Ten Falls hike and has many other things to offer. The park is about 25 miles east of Salem, Oregon and sees over a million visitors a year.  The park has a campground, lodge, bike trails, playgrounds, picnic areas, and very well-developed hiking trails.  One of the highlights of the trails is that several, including the most popular South Falls, have passage ways behind the falls allowing one to hike underneath the water flow itself. I was very impressed with the maintenance, signage, and quality of the trails in this park which is among the best we have seen anywhere.

The area was rejected for national park status in 1926 (too many tree stumps!), but had a fortuitous break when in 1935, President Franklin D. Roosevelt selected the land as a “Recreational Demonstration Area.”  This was one of two in the west coast region. This act prompted the sending of the Civilian Conservation Corps to build the South Falls Lodge and enhance the area infrastructure. Much like the impressive CCC work in the Shenandoah National Park back in Virginia, one can truly appreciate the difference these construction teams made.

This apparently is a place for weddings as well, and we saw a young couple in their best finery having their “save the date” photos taken with the South Falls as the backdrop.  After some googling, I discovered an entire wedding page for the lodge and conference center.

The Trail of Ten Falls is actually a combination of several trails.  We took the Canyon, the Winter Falls, and Rim Trails to view seven of the 10 falls.  It is a beautiful hike with one always anticipating the next fall’s viewpoint.

An added bonus is the lush foliage, numerous bridges, and even some old growth trees along the way. I can only imagine how much more impressive the falls will be in late spring when there is more water volume.