When I was a child my family and I went to visit Mesa Verde National Park. I remember climbing down the ladder to the cliff dwellings and looking out over the expansive landscape. Since we were near the national Park, David and I wanted to visit it. 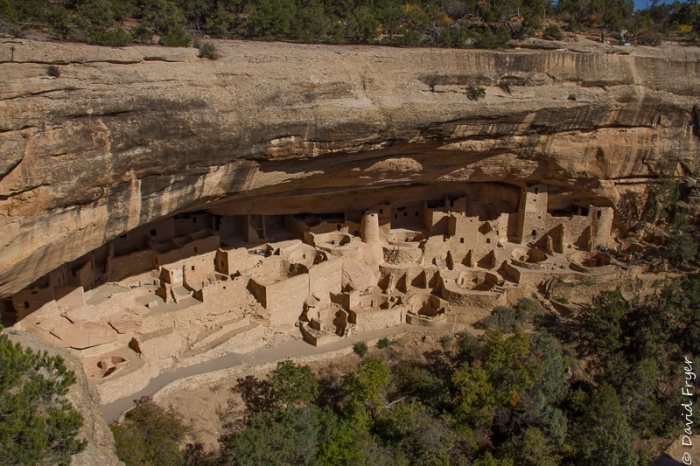 Mesa Verde means “green table” in Spanish. The Mesa Verde National Park was established by Theodore Roosevelt in 1906 and Mesa Verde is also a UNESCO World Heritage site. The park is located on the Colorado Plateau near the four corners area.  There are two distinct mesas in the park: Wetherill and Chapin. The Ancestral Puebloans lived on these mesas for more than 700 years. They were farmers and grew squash beans and corn. Originally they lived in pit houses on top of the mesas but they decided to move into the cliffs below and build their homes there. The cliff dwellings were built between 1190 and 1270. The experts are not sure what prompted them to relocate to the cliffs. They theorize that it could have been caused by warfare, overpopulation and the need for more farming space, or for religious reasons but they cannot be certain because the Ancestral Puebloans left no written record. The Ancestral Puebloans lived in the cliff dwellings for about 100 years and then relocated to what is today New Mexico and Arizona. Once again, it is unclear why they decided to abandon Mesa Verde.

There are more than 4300 archaeological sites in Mesa Verde National Park and we wanted to visit some of the cliff dwellings. When you come to Mesa Verde, you need to get tickets for the ranger-led tours. Tickets are available at the Visitor Center at a cost of $5.00. Tickets are available two days in advance so we went to the Visitor Center the first day we arrived in Cortez, CO to ensure that we could visit some of the cliff dwellings. We wanted to visit Cliff Palace, the largest cliff dwelling, but it was closed for restoration.

We were able to get tickets for two ranger-led tours: one to Balcony House and another to Long House. On the Balcony House tour we had to climb up a 32 foot ladder to enter the site. To exit we had crawl through a 12 foot long tunnel that was 18 inches wide and climb up several other 15 foot ladders.

On the Long House tour we only had to climb up a 15 foot ladder.

Long House is the second largest cliff dwelling. They think that 100-120 people lived there and it has about 150 rooms. Many of the rooms were used to store food. The Ancestral Puebloans stored enough food for 3 to 5 years to endure droughts.

Central to the daily life of the Ancestral Puebloans was the kiva. Kivas are round underground chambers with a hole in the roof. Important social, religious, and daily activities took place in these communal meeting places.

The Ancestral Puebloans where excellent basket weavers as well as farmers. Later they also developed beautiful pottery which they traded with other tribes in the area. It is clear that they traded with other indigenous groups as far away as Mexico and the Pacific Coast. There are samples of their craftsmanship in the Mesa Verde Museum. 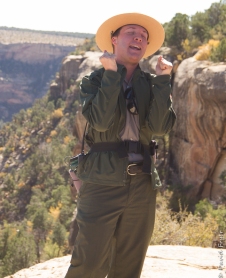 David and I were glad that we spent several days in the park. Whereas other parks’ allure is their beautiful landscape, this park focuses on people groups and their lifestyles. Mesa Verde is an interesting and amazing National Park.