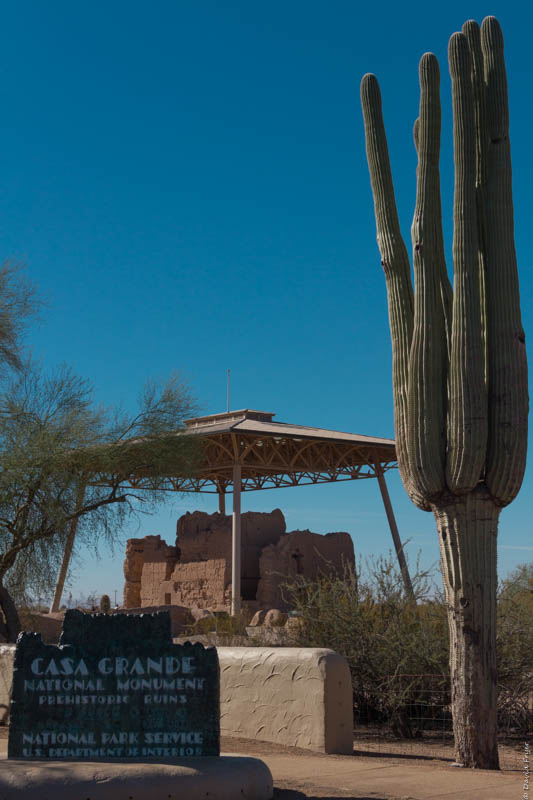 The Sonoran Desert has proven to be a challenging place for both people and plants to survive.  Just as plants have had to adapt to live in an area that only receives ten inches of rain annually, so have the people who choose to live in the desert.  The Ancestral Sonoran Desert people, who lived in the Casa Grande area for more than 1,000 years, flourished there due to their adaptability and ingenuity.  The Casa Grande Ruins National Monument tells the story of their lives and their extraordinary accomplishments. 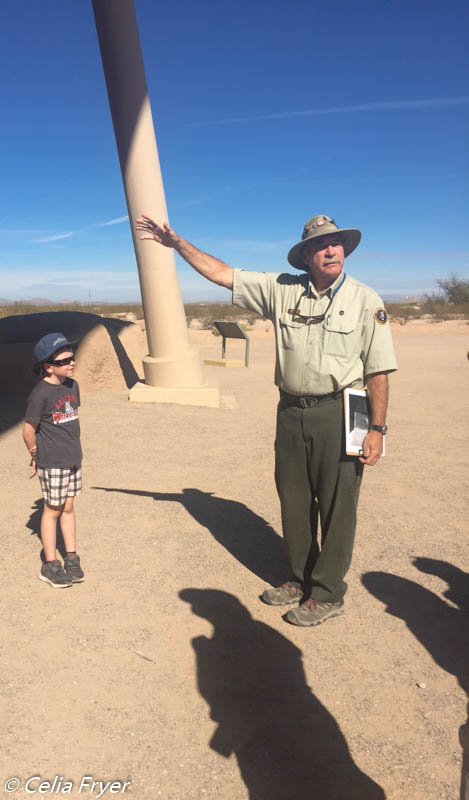 The Casa Grande Ruins National Monument is the first archeological site designated a National Monument in the United States.  Located in Coolidge, AZ (not Casa Grande, AZ), this monument is about one square mile and contains the remnants of a compound with several structures that date back to the early 14th century. In addition to the ruins, there is a Visitor Center with a museum and a theatre that shows a short informative video.  We were fortunate to be able to take a guided tour which gave us the opportunity to learn even more about this site and the Ancestral Sonoran Desert people. 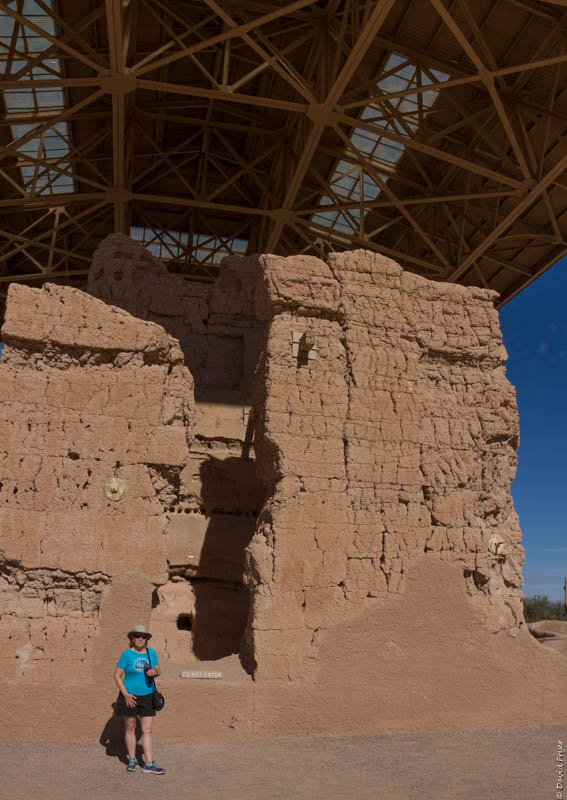 The Ancestral People of the Sonoran Desert are fascinating due to both their architectural and agricultural accomplishments.  They built a number of compounds near the Gila and Salt Rivers, but the most impressive structure is a four-story building called “Casa Grande,” or “Big House” in Spanish, that was built about 1350 A.D.  Named by the Spanish priest Eusebio Kino in the 17th century, Casa Grande is a large hand-built structure that has survived from more than seven centuries.  One of the reasons for its longevity is that it was built using caliche, a natural cement made from calcium carbonate and other materials.  Calcium carbonate found in arid desert regions is mixed with sand, clay, and water to form a very durable cement.  To build this platform structure that is 60 feet long, they needed 3,000 tons of this material.  They did not have the wheel or any beasts of burden to help move materials to the site and they had to amass all of the material before they began construction.  The knowledge and expertise of the engineers was impressive and the orientation of the building highlights their awareness of astronomy as well.  The structure is positioned marking the four cardinal points.  Also there are circular holes in the sides of Casa Grande that align with the setting sun during the summer solstice and others that align with the moon at specific times of the year.  Casa Grande is a remarkable testament to the Sonoran villagers’ knowledge and skills. 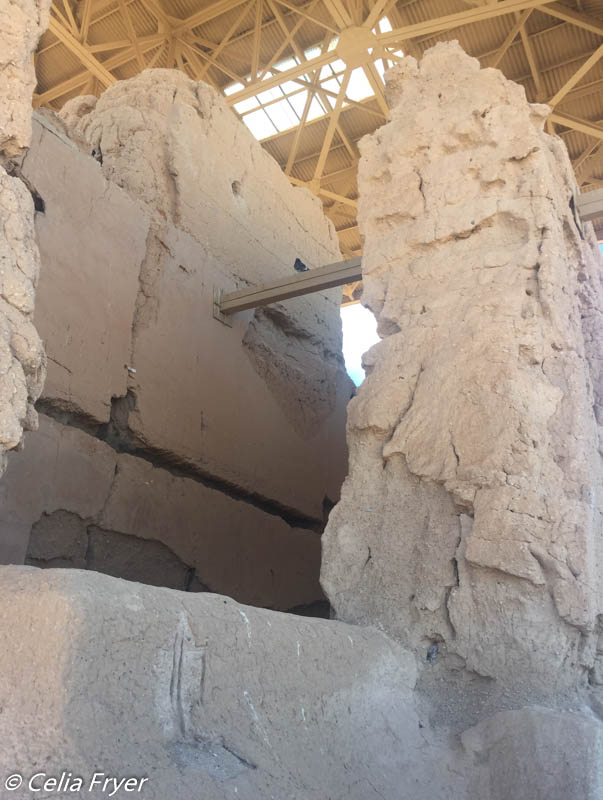 Another incredible accomplishment is the Ancestral Sonoran people’s ability to harness water.  They build an extensive canal system to divert water from the Gila and Salt Rivers to their fields and living compounds.  These canals were built incorporating the natural slope of the land to maximize water flow.  Some of the canals were as much as six feet deep in places.  Although the Gila River was only five miles away from Casa Grande, the canal system that services the city is eighteen miles long because they had to engineer it in such a way as to ensure that the water flowed continuously along the entire canal system. Moreover, they only had a digging stick and a hoe made from river rocks to help with the excavation.  This project involved tedious, back-breaking work in the hot desert sun – a truly amazing feat. Once complete, however, they were able to grow squash, beans, and corn which fed some 2,000 inhabitants of the region.  Also they grew cotton and produced woven textiles.

The Sonoran Desert peoples traded widely.  Copper bells from Mexico and shells from California were discovered among the ruins. They traded food stuffs, cotton textiles, jewelry, and pottery with other groups. Since they did not have a written language, it is difficult to know precisely why they build Casa Grande, but one theory is that it was a commerce building where different groups came to exchange goods.  Others have conjectured that it could have been a ceremonial site or an administrative hub for the region.  For archeologists, there are still many unanswered questions about Casa Grande.

Along with the main building at Casa Grande, there is also a ball court. Ball courts are prevalent throughout Mesoamerica.  The games played there were used not only for entertainment but also to settle disputes among different groups. How the Casa Grande ball court was used remains unclear but the fact that there is one there points to the fact that there was an exchange of goods and ideas among the Sonoran Desert and Mesoamerican groups. 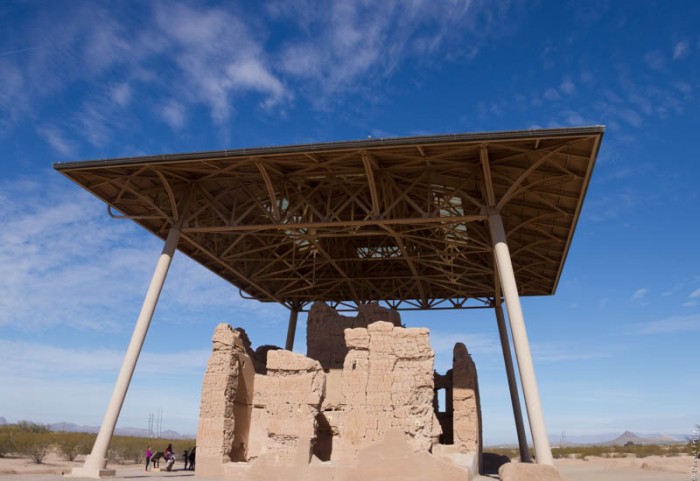 Casa Grande became a National Monument in 1918 to protect these structures and preserve their history. One of the ways that the National Park Service has tried to preserve the ruins was to build a ramada, or cover, over them.  The current ramada, built in 1932, is a large bridge-like structure that was designed by Frederick Olmstead, Jr., a well-known Boston architect whose father designed New York’s Central Park. Its design and functionality are striking. 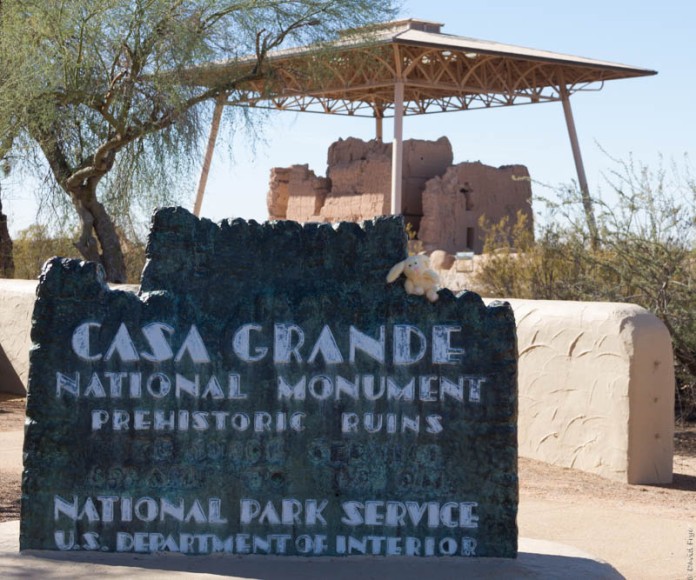 After visiting the National Monument, we toured the Museum of Casa Grande in Casa Grande, AZ.  It is a small museum that recounts the history of the town of Casa Grande from its origins to the present.  This History Museum has over 16,000 artifacts.  There is pottery from the Ancestral Sonoran Desert people, mining and farming implements, vintage fire trucks, and much, much more.  Moreover, they have collected oral and written histories from many of the town’s residents. Quotes from these histories are included in many of the Museum’s exhibits. 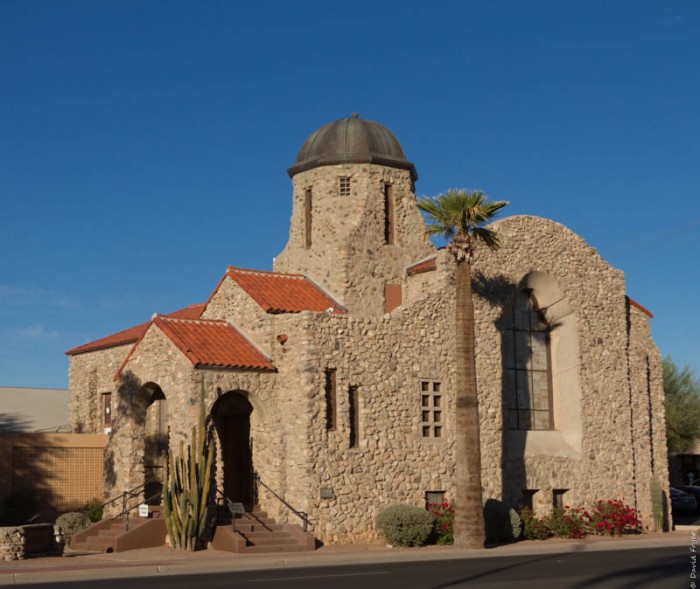 Behind the Museum is the Rebecca Dallis School House which has been moved to this site. This school house was the one that African American children attended prior to the integration of schools in Casa Grande in 1952.  Rebecca Dallis was the school teacher and she instructed all eight grades in this one-room school house.  At times, there were up to 70 students who attended this school. She taught there from 1939 until 1952. After that she became the principal at one of the other integrated schools in the county.  She inspired many young children to become teachers and to go on to college which was truly admirable.

This Museum has a little something for everyone and it is worth a stop if you are in Casa Grande, AZ.

One thought on “The Great House”