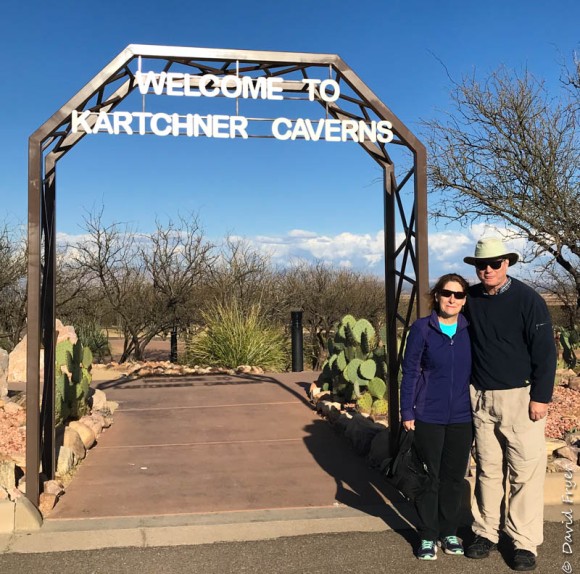 When we told people that we were going to the Tucson/Benson area, they asked if we were planning on going to Kartchner Caverns. Almost to a person, they said that they had enjoyed their visit there. Since these particular caverns are only about nine miles south of Benson where we were staying, we put this destination on our “must see” list.

Kartchner Caverns are part of the Kartchner Caverns State Park. One of the things that really impressed us was the way that the park service is intent on protecting and preserving these caverns. They have gone to great links to make sure that future generations will be able to enjoy them. Because these are active and live caverns they are continuously studied by researchers. The Kartchner Cavern system is one of the most studied public caves in the United States.

The focus on preserving Kartchner Caverns began with Gary Tenen and Randy Tufts, the two men who discovered them, in 1974. These two avid cavers found a sink hole and decided to investigate further.  Once Tenen and Tufts had explored some parts of the cave, they realized that this was a “once in a lifetime” find. They feared that others would damage the caves if their location became known so they kept their find a secret for 14 years. To ensure that the caves remained unmarred, these two explorers went privately to the Kartchner family and informed them about their discovery. The caverns were on land owned by this family. After consulting with them, it was decided that they should contact the Arizona State Parks. In 1985, the state purchased the land and three years later the public was told about this wonderful discovery.

The Arizona Park Service wanted to protect Kartchner Caverns but they also wanted to be able to educate people about this special place. They took a year to design and develop the paths through the caves being careful not to disturb its features. The state spent $28 million installing a system of anti-lock doors to protect the caves from drying out. They are also very particular about what visitors are allowed to do while in the caves. The guides insist that you not touch any cave feature save the handrails while on the tour. Should you accidentally touch something, you are to alert the guide and they will mark that spot.  In the evening a crew comes back through the cave and cleans the spot to remove any debris or oil that might have been deposited on the surface. This protects the cave from getting bacteria on its pristine surfaces.  As you can tell, they are very serious about protecting this natural wonder.

When you visit Kartchner Caverns, the park service asks that you arrive at least 30 minutes before your tour starts. We took that time to see the 15-minute orientation video and to look around the exhibits in the Discovery Center. It was a good way to begin our visit there. 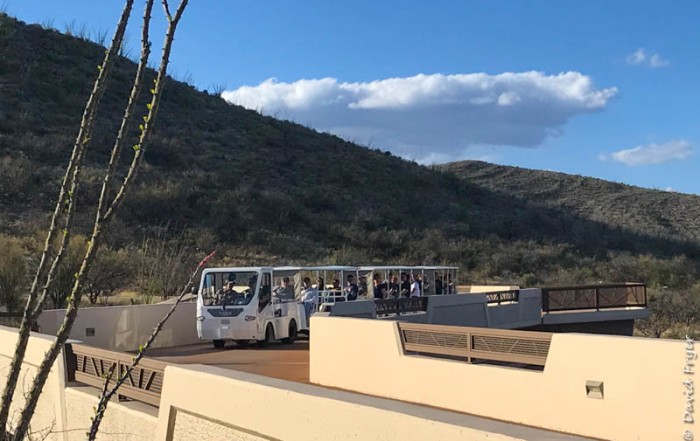 To get to and from the entrance to the caverns, you must ride a tram. There are two rooms that you can visit, the Throne Room and the Big Room, and there is a separate tours for each. The Big Room is closed from April through October because bats roost in that room of the caverns. The Throne Room is open year around and that is the tour that we took. We were surprised that the average temperature inside this cave is 72 degrees with 98% humidity. Unlike Carlsbad Caverns that were cold, this one was balmy.  Also, unlike Carlsbad Caverns where you can walk through parts of the cave unaccompanied, all tours at Kartchner Caverns are guided. In addition, you are not allowed to take cameras, video camera, cell phones, backpacks, strollers, purses, etc. on the tours. Consequently, we do not have any photos of the interior of the Throne Room.

In the Throne Room, there is a large column called Kubla Khan. It is 58 feet and extends from the high vaulted ceiling to the floor. Tenen and Tufts named this feature after a poem by Samuel Taylor Coleridge. This place has a surreal feeling, so they thought it appropriate. Although we could not take a photo of this feature, there was a painting of it in the Visitor Center and this gives you an idea of what it looks like. It is the largest column formation in Arizona.

We also saw other features on the tour, such as stalactites, stalagmites, soda straws, helictites, cave bacon, and draperies. We also saw 45,000 year old bat guano. This cave is a wet cave and water was dripping down the features proving it is still very much alive and growing. We were very impressed by the tour and the caverns. Our tour guide, Dave, was quite personable and very well-informed.  David and I stayed after the tour and asked him some more questions. He was more than willing to stay and chat with us.

If you decide to visit the Kartchner Caverns, be sure to purchase your tour tickets well in advance. When we arrived for our tour on Monday, we overheard the person at the Visitor Center desk say that the next available tour was not until Friday that week. We were glad that we had gotten ours online. Even so, we had to put off our visit for several days due to ticket availability.

At the Visitor Center, there is a gift shop and a café called the Bat Cave Café that serves light fare. In addition to the cave tours, Kartchner Caverns State Park has many hiking trails and a nice campground on site.

We have really taken advantage of our time in the Benson/Tucson area and explored many interesting places. There are still so many more that we did not have time to visit yet but it is time for us to move along now. One of the things that we will miss is seeing the light from the sunset illuminate the Dragoon Mountains. We can see these mountains out the back window of our camper and the views have been truly spectacular. 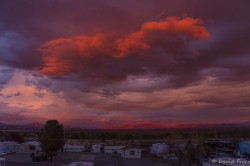