The Enchanted Circle surrounds the highest peaks in New Mexico, including Mount Wheeler at 13,161 feet. The route includes the towns of Taos, Questa, Red River, Angel Fire, and where we camped, Eagle Nest. 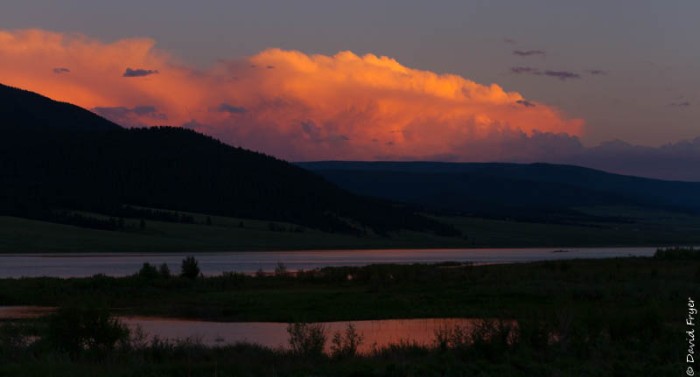 We were able to park right beside Eagle Nest Lake in the state park there. This dry-camping location is especially popular around Independence Day because of the numerous activities during this time culminating in a fireworks display over the lake.

This small no-traffic-light town grows exponentially during the summer, mostly with folks from Texas that come to the mountains to escape the heat of their home state. At 8,382 feet, the weather was very pleasant during our stay. In fact, we could see the snow covered Mt. Wheeler from the Bighorn.

We are constantly surprised at the unique discoveries you can make when you are piddlin’around. The Vietnam Memorial in Angel Fire was one of those finds. This wonderful small chapel, garden, amphitheater, museum, archive, gift shop, memorial walk, and visitor center was one of the highlights of our stay. This memorial was the first in the nation dedicated to Vietnam Veterans. 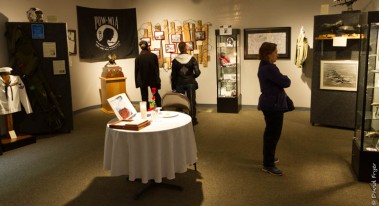 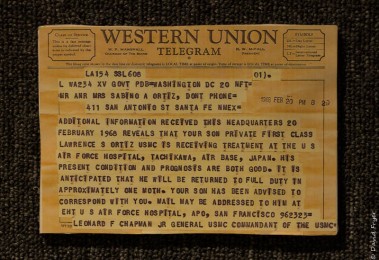 Set high on a hill overlooking the valley, this monument is a fitting tribute to those who served. Started by Victor “Doc” and Jeanne Westphall whose oldest son, First Lieutenant David Westphall, was killed in the Vietnam War, this memorial is now part of the New Mexico State Park system.

The Chapel was completed in 1971, three years after David Westphall’s death. Doc Westphall often would be there personally greeting each veteran who came to visit until his death in 2003. The site continues to grow as it seeks new sources of funds, the latest being from the NM Department of Veterans Affairs.

It was moving to visit a place so dedicated to remembering those who have served our country and especially those who made the ultimate sacrifice for freedom. 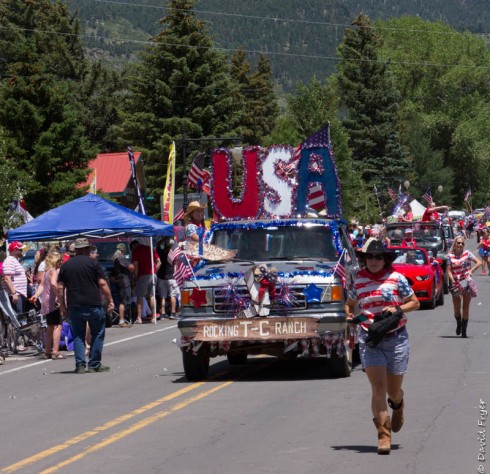 Just a few miles from the memorial, the town of Eagle Nest shows its patriotism on Independence Day. The town has a parade on July 4th down the middle of its main street and it draws a large crowd each year. The road is a state highway and they just shut it down for the entirety of the parade! The event features fire fighters, police, businesses, horses, and any vehicle that can sport an American Flag. 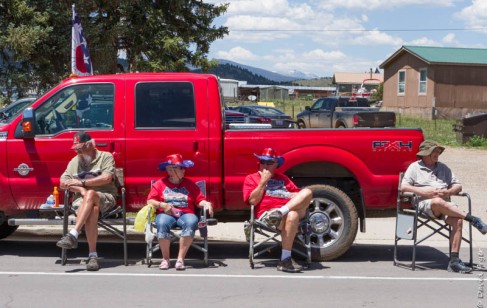 Many in the crowd were dressed in their best Independence Day outfits and they also knew to bring umbrellas to protect against the sun. 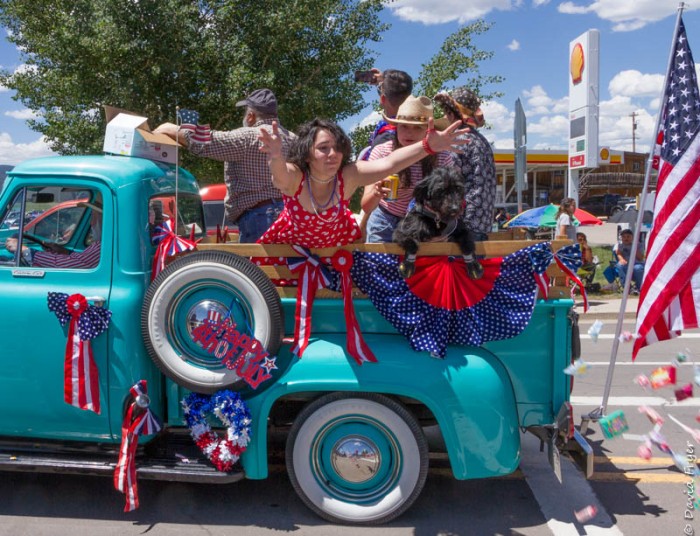 Candy was one of the big draws and children made out like it was Halloween, leaving with large bags of goodies. 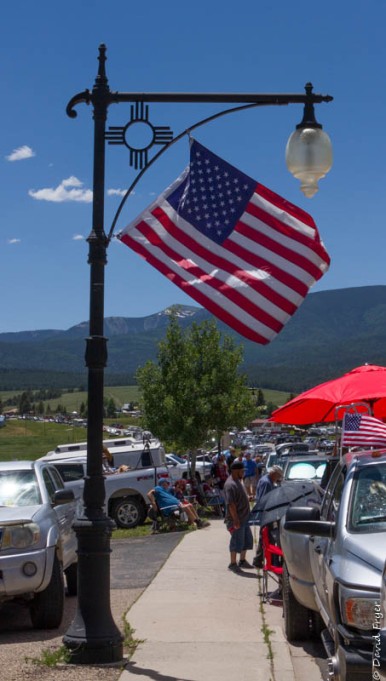 Later that night, we were in the perfect spot for the fireworks which had the Sangre de Cristo Mountains as a backdrop. Our good Arizona friends, Sally and Peter, were at the same campground and we enjoyed watching the fireworks together. 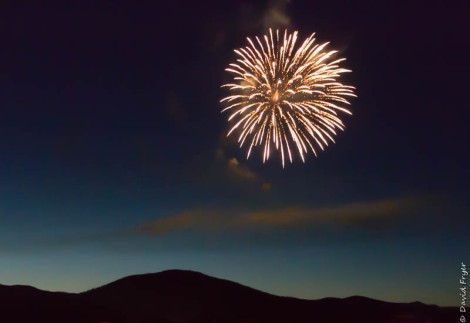 In fact, our little campground had many friendly folks. We got to know one another well and we had fun sitting around chatting. Many had the New Mexico State Park Pass which is one of the best deals that we know of anywhere. For a fixed fee (for an out-of-stater it’s $225), you can camp for free or for $4/night for electric sites for an entire year in a NM State Park. That is the best deal that I know of and makes NM a very attractive camping destination. 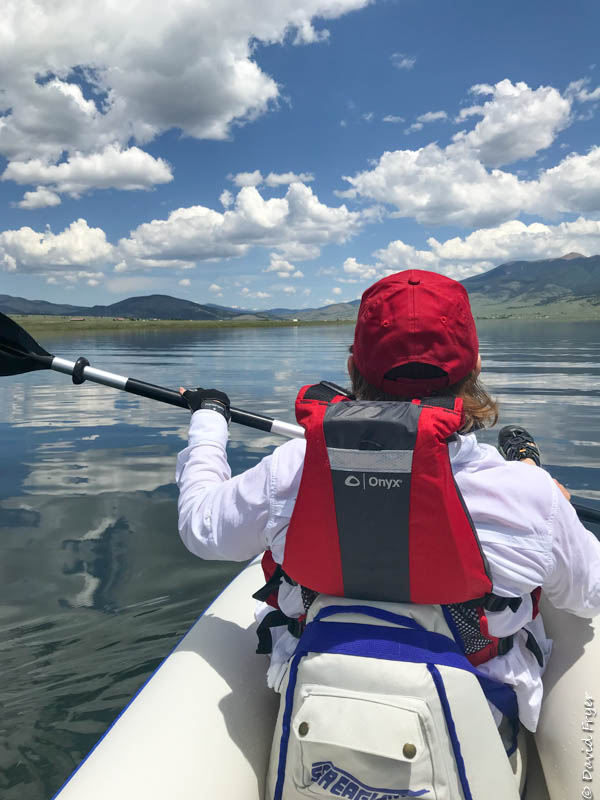 When the wind was not blowing, we enjoyed the lake in our kayak. It was windy almost every afternoon, so you have to get out in the morning. Although it is a high desert type of environment but it is especially green this year due to the abundant rainfall. There are plenty of waterfowl, mountain views, and cool breezes to watch and enjoy. 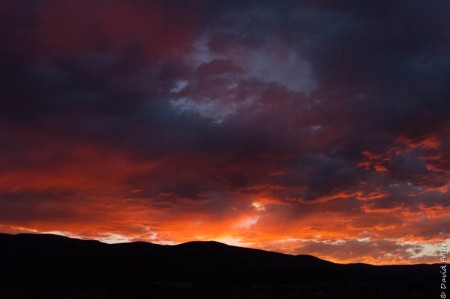 Our neighbor’s camper lit up in a storm

We have been boondocking a lot lately and I was excited how well our small solar setup has been working. The two 100 watt panels were more than enough to keep us going and we never even pulled out the generators during our 10 day stay. We don’t use a microwave with our small setup and make coffee with the French Press, but we have all the power that we need from the sun.

We did have some issues that I could have foreseen but did not. We have never camped at over 8,000 feet before and propane devices don’t necessarily like that. Our refrigerator and hot water heater were not happy at that altitude. After doing some research, I figured out that the hot water heater would need a different orifice to operated correctly. Fortunately we all have the internet and someone suggested opening the water heater outside door to let in more oxygen and that worked!

The Norcold refrigerator manual says that above 5,500 feet you should run only on electric?!? That wasn’t an option, but we found that turning it up to the highest level would keep it running. We had had no problem at 7,000 feet, so above 8,000 feet must have been the limit of its happiness.

There is always something to figure out or fix when full-timing and this stay was no exception. I needed a part for the camper that I could order from Amazon but did not have a place to send it. After spotting a UPS driver, we stopped him and asked who could help. He said that the local marina owners were the nicest people in town and surely they would help. He was right and three days later I picked up the package from them. 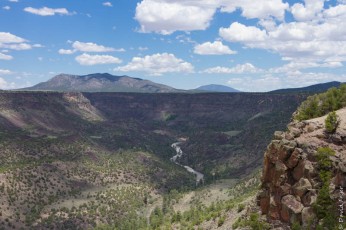 It is a beautiful and remote area about a 25 minute-drive from the small town of Questa, NM. One important note is that for six weeks, starting in June, the area is terrible for small no-see-um type of bugs (biting midges?) and you don’t want to be staying there during that time.

We also visited the tourist town of Red River in its beautiful mountain setting. The drive to the town is very scenic passing through forested mountainous red rock formations. This is not what you imagine for a New Mexico landscape. Plus, if you are lacking in fudge, Christmas ornaments, or wood-carved trinkets you will be in the right place.

We are enjoying more and more being in the small towns on our visits. It is just more relaxing and a completely different vibe. Also, being able to pick the best weather times for our visits is fantastic. Eagle Nest had highs in the 70s and lows in the 40s during our stay which we enjoyed.

Our month in NE New Mexico has been great and definitely warrants a return visit. Maybe we should get one of those NM park passes!