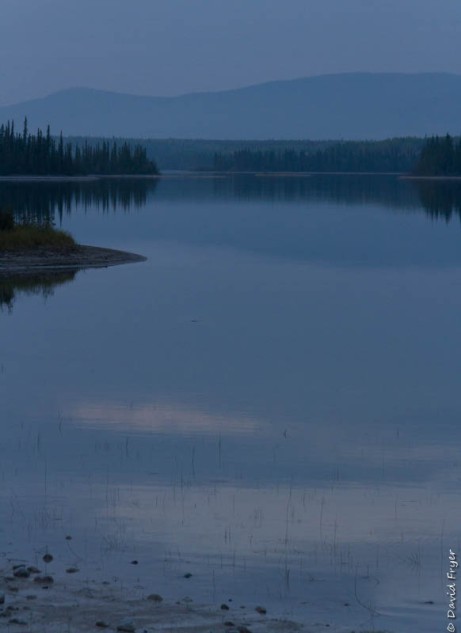 Imagine travelling about 450 miles without cell service, few gas stations, and fewer places to pickup any supplies. You have the essence of the Cassiar Highway in Canada. This road is an alternative route to the lower 48 as opposed to traveling the entire length of the Alaska Highway. It travels closer to the west coast and was perfect for our ultimate objective of Portland, Oregon. While the way was smoky because of the fires, it gave the area an almost “blue ridge” kind of feel.

The Cassiar was considered for the route of the Alaska Highway, which was built during the Second World War, but was ultimately rejected as being too close to the coast and thus more difficult to defend in war time. This part of Northern British Columbia is very sparsely populated as most of the provincial residents are located in the Vancouver region to the south. In spite of the heavy smoke at times, the drive is beautiful and it provided the opportunity to visit the towns of Stewart, BC and Hyder, AK. Hyder is an Alaska “panhandle” town that is accessible by road. 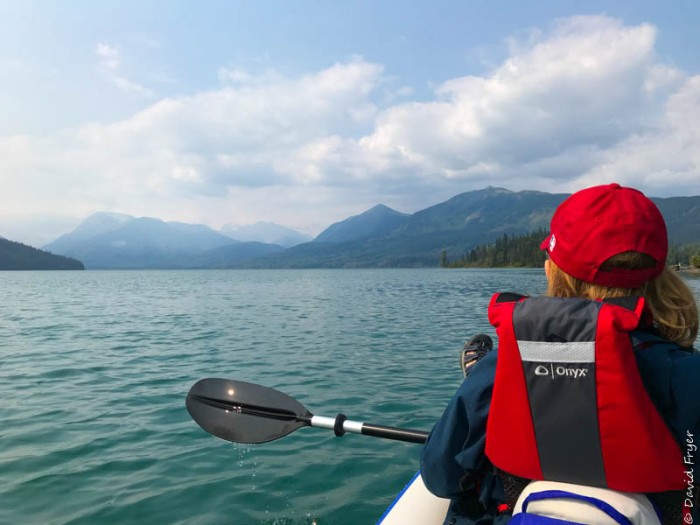 The provincial campground at Meziadin Junction is a beautiful spot. You camp right on the lake and it is a great place to break out the kayak. Fortunately for us, the smoke was not that heavy as compared to areas farther north and because it was so nice we decided to stay for three days. We took one of those days and traveled into Stewart/Hyder located on the Portland Canal. In addition to a fun little community, there are several things that we wanted to do: drive to the Salmon Glacier and the bear viewing at Fish Creek in Hyder.

Multiple people recommended that we “eat at the bus” in Hyder. This is a seafood eatery that is known far and wide and has a well-deserved reputation. Owner Diana Simpson serves up delicious halibut fish and chips drawing an international crowd. 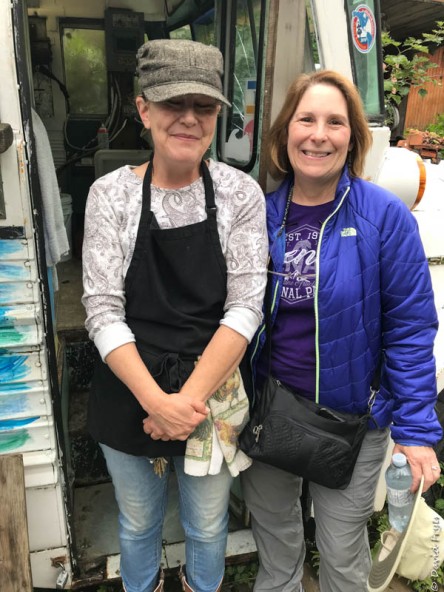 The road from the bear buffet to the Salmon Glacier is a 17 mile gravel road that ascends to the summit and is noted for its accessibility to a large glacier. The visitor center in Stewart offers an auto viewing guide for the 13 or so marked stops along the way. As we have mentioned before, we have dealt with a considerable amount of rain during the summer and our time here was no exception. Fortunately the clouds and rain held off until we were almost to the summit. The cloud cover rolled in and we had to turn around, but we were able to see much of this massive glacier, the fifth largest in Canada.

By the way, the drive into the Stewart/Hyder area is absolutely beautiful and includes a road side glacier too.

The impressive Bear Glacier greets the traveler unexpectantly along the connecting road from the Cassiar to the coast. We saw several bears along the road who did not realized that they were supposed to be at the viewing area in Hyder.

From Meziadin Junction we continued south not knowing how much smoke we might encounter. A part of the ALCAN east of Watson Lake had been closed for 48 hours and we had also heard that it was very smoky in the Prince George area. We stopped in the town of Hazelton and the Ksan First Nations Village which is at the terminus of the Cassiar. The Ksan village is a replica collection of buildings and totem poles near the confluence of the Skeena and Bulkey rivers.

South of Prince George the road follows the Fraser River. This incredible gorge is a memorable drive and culminates in a narrow section called Hell’s Gate. A tourist attraction has been developed there with a tram (fee) that descends to the bottom of the gorge. Fortunately visitors can also hike down to the suspension bridge at the river. From there you can view the violently rushing waters and the massive fish ladders created to preserve the salmon breeding grounds upstream.

Traffic started to get heavier and heavier as we neared Chilliwack, BC. We saw the first traffic light in over four weeks, so we knew we were getting closer. We stopped at a gas station and pulled out all our remaining Canadian change. I went into the attendant and laid out all the coins and bills and asked to give me that much diesel. We might as well not cross the border with any loonies and toonies.

This was to be our eighth border crossing since leaving in May, but you always are a little apprehensive at each one. At our last crossing, the agent insisted we must be carrying marijuana. We finally said that he was welcome to search all he wanted, after which he let us proceed.

After a long wait in the RV line, we were through customs at Sumas, WA gladly sharing the declaration of a wonderful summer in our 49th state and our friendly neighbor to the north.