Today was our last full day at Grand Teton National Park.  It proved to be a great last day in the park! 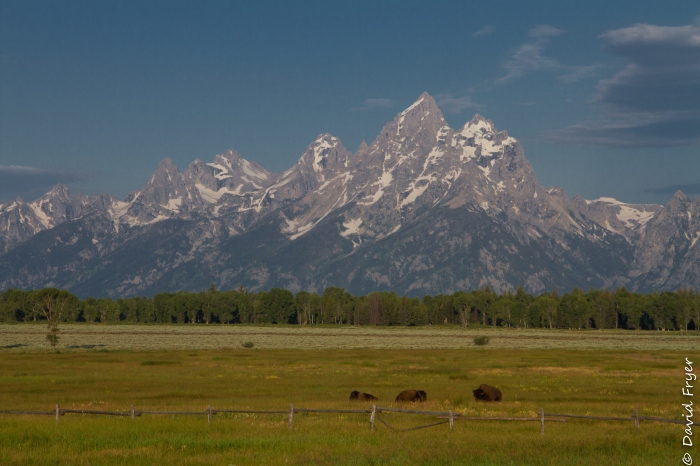 We decided to get up early so that David could take some photos of Mormon Row.  The Mormons sent scouting parties from Salt Lake City to find new areas where they could settle since their numbers were growing in Utah.  The first Mormon settlers came not from the Salt Lake City area but rather from Idaho.  They arrived in the 1890s.  They selected this place because there was water, the Gros Ventre River, and because there was a butte, Blacktail Butte, that shielded them from the winds.  The soil was relatively fertile too.  In Jackson Hole, they established a community and they worked collaboratively to ensure their survival there.  They built levees to irrigate their fields. 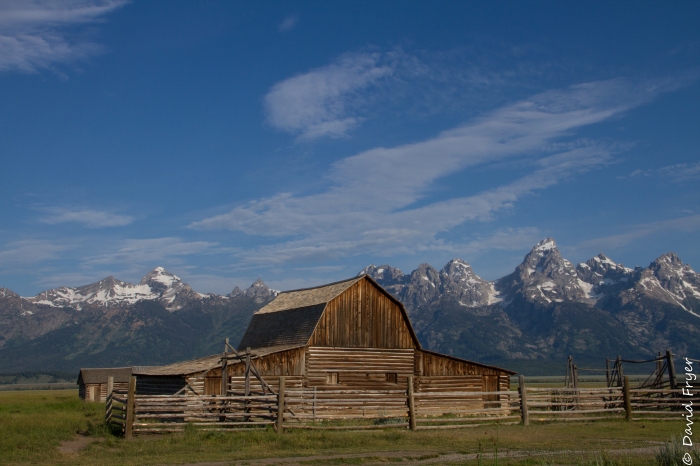 One of the most famous remaining buildings along Mormon Row is called Moulton Barn. Thousands of photos have been made of this barn and most guide books have a picture of it. David was able to photograph this place. 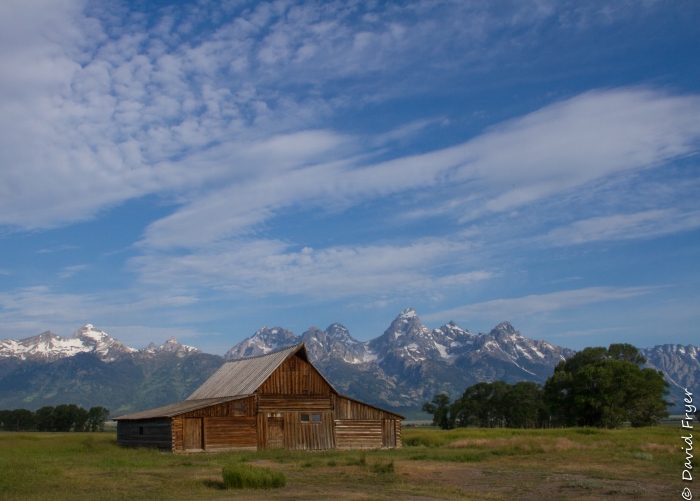 On our way to Mormon Row, we saw a moose!  We were so excited to finally see one. The last time we were in Grand Tetons, we looked and looked but never were able to spot one.  This one was extra special because she had a young calf with her. It was the perfect start to our day. 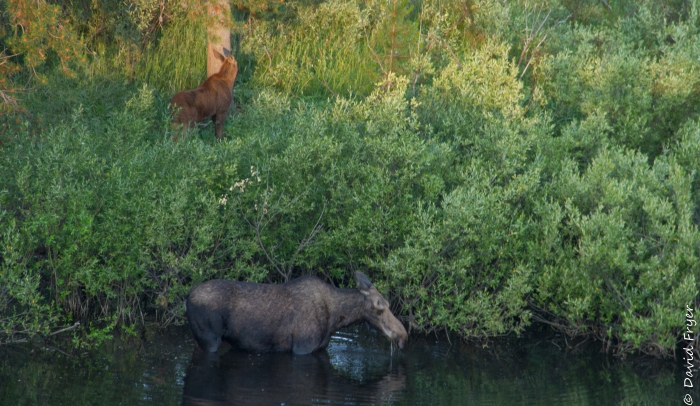 When we left Mormon Row, we saw a male elk.

One of the other things that we wanted to do while we were here was to hike to Leigh Lake.  As with so many of the lakes and landmarks, this lake was named after an early trapper. In this case, Richard “Beaver Dick” Leigh, has this beautiful lake named after him.  Usually the water is not warm enough for swimming but we saw several folks who were up to the challenge. It is a lovely alpine lake with crystal-clear water.  From the trail you get excellent views of Mount Moran. 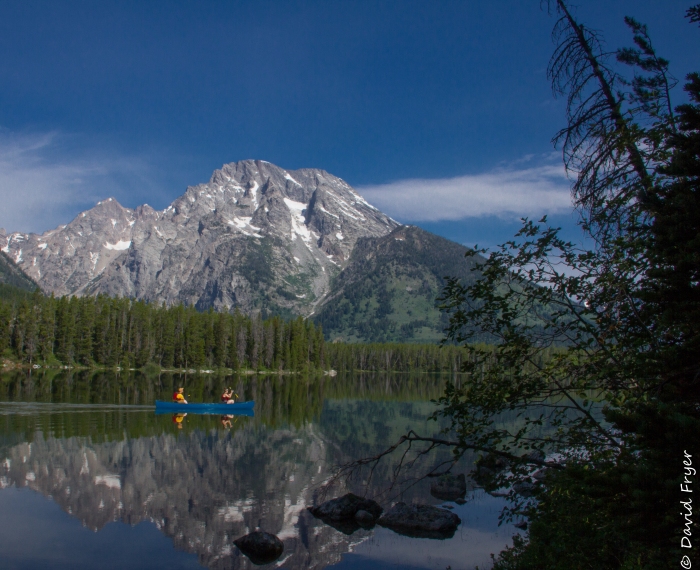 We arrived there about 8:45 AM.  The trail begins at String Lake, another lovely alpine lake.  There were a number of canoeists and kayakers on the lake.

For about a mile, we walked beside String Lake and then we veered off and hiked on to Leigh Lake. The canoeists can portage their canoes to Leigh Lake and several of them did.

We were hiking along the edge of Leigh Lake and we saw a bird on a rock in the lake.  We didn’t know what kind of bird it was so we asked the couple following us if they knew.  Well, it turns out that they are both biology professors and their names are Joe and Catherine, plus she is an ornithologist. She told us that the bird was a female common merganser.  Throughout she would identify birds for us, frequently just by the call it made.  Joe was also a great source of plant and habit information. That really enhanced our hike. We traveled together for the remainder of the trip. 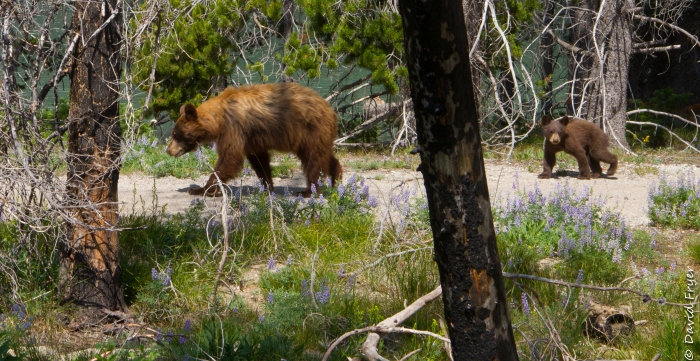 As we were hiking, another hiker coming the opposite direction told us that there was a bear and her cub up ahead.  We cautiously continued our hike and made an effort to make a lot of noise.  Catherine also had bear spray out.  Well, we did see that bear!  She was ambling down the trail and we moved off to give her the right of way.  She was not aggressive but we didn’t approach her. We just observed her and her cub as they ambled down the trail.  We continued our hike and decided to venture to yet another small lake called Bearpaw Lake.  We didn’t see any more bears as we hiked to the third lake or on our return to the parking area. 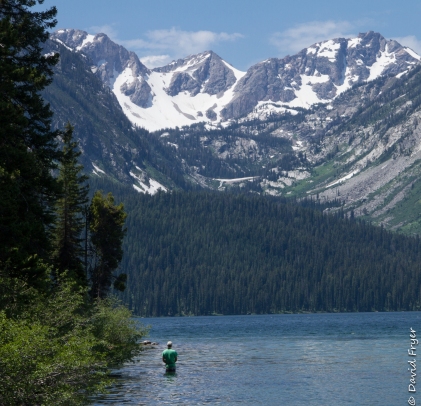 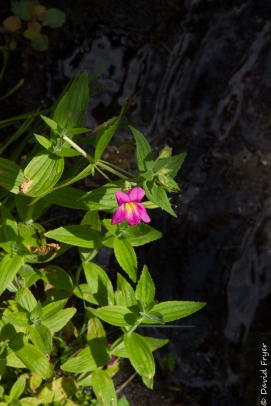 We have had a wonderful day seeing wildlife, taking photographs of some amazing parts of Grand Teton, and meeting a wonderful couple from Durango, Colorado.  We may have to go visit them sometime.

7 thoughts on “A Moose and a Bear Before Noon”