They that can give up essential liberty

to obtain a little temporary safety

deserve neither liberty nor safety. 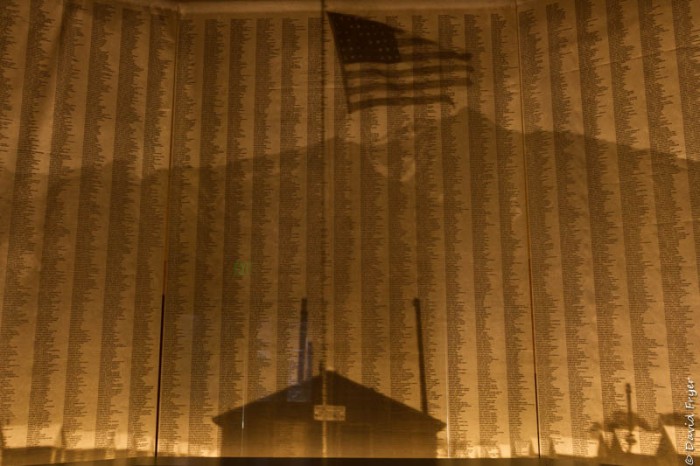 On February 19, 1942 President Franklin D. Roosevelt ordered that all persons of Japanese ancestry regardless of citizenship be removed from the West Coast. Over 70,000 citizens and others were removed to 10 remote interment camps under the direction of Lt. General John DeWitt who said that, “They all look the same…A Jap’s a Jap.” Over all, 120,000 Japanese Americans were incarcerated.

One of those camps, located in an abandoned Eastern Sierra desert town, was Manzanar. I had heard of it but only because of famed photographer, Ansel Adams. Over 10,000 people were forced to abandon homes, businesses, communities, and their dignity. They were then shipped to a hastily built camp in the Eastern Sierra that housed them for multiple years.

Told that they were being transported for “protection” the reality quickly set in with the appearance of barbed wire, machine guns, and tall guard towers. The majority having never been to Japan had their lives forever changed because of a fearful nation. 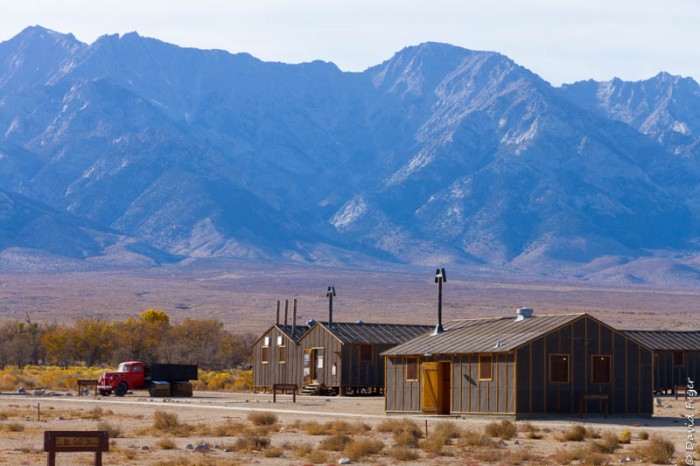 Manzanar, Spanish for “apple orchard,” is located just north of Lone Pine, CA on highway 395 in the Owens Valley. The internment camp has been set aside by the National Park Service as a National Historic Site. The visitor center, exhibits, and grounds are very well done and worth a visit. There is also a three mile drive encircling the grounds with a monument on the western-side near the cemetery.

The inscription on the east side of the monument is “Soul Consoling Tower” and on the west side it reads “Erected by the Manzanar Japanese, August 1943.” The memorial typically has origami draped on it and is the focal point of annual pilgrimages to the site.

The visitor center exhibits detail life within the camp and the voices of the people who were incarcerated there. One striking display lists thousands of names representing the inhabitants silhouetted by the camp.

To our pleasant surprise, when we were leaving the Visitor Center, we met one of the original occupants of Manzanar. Leaning on his cane, Hank Umenoto talked to the small impromptu crowd gathered around him. We soon discovered that he had published a book entitled Manzanar to Mount Whitney: The Life and Times of a Lost Hiker. Hank, who is now 91, graced us with stories and memories of the difficult time at Manzanar and the years following. Upon release, many of the detainees had no place to go because they had lost everything. Following Manzanar he spent years on Skid Row.

Later I discovered that Mr. Umenoto had served in the Korean War and also ran a printing business for over 30 years. 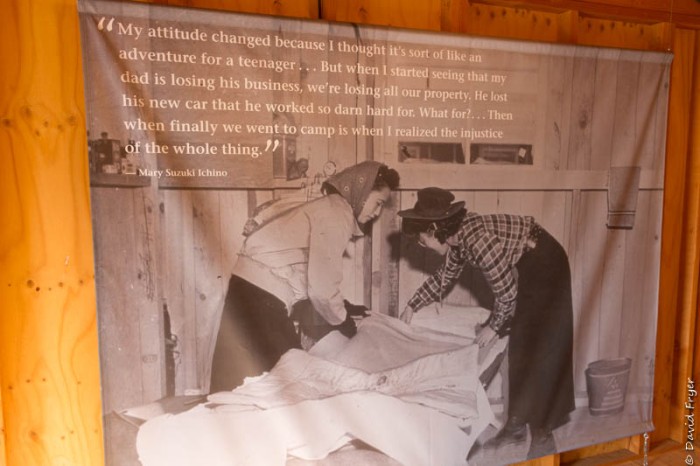 As I pondered Hank Umenoto’s life story, it dawned on me that the towering Mt. Whitney of the Eastern Sierras can be seen from the windows of the Manzanar barracks.

2 thoughts on “Confined Because of Their Ancestry – Manzanar”