Scenic Byway 12 is a 124-mile highway that traverses the Dixie National Forest and Grand Staircase Escalante National Monument.  The Dixie National Forest covers about two million acres and is one of the largest national forests in Utah.  Theodore Roosevelt understood the importance of these lands and he set them aside so that there would be sufficient water for the surrounding communities.  The Grand Staircase Escalante National Monument is also about two million acres of protected land.  Bill Clinton designated them a national monument in 1996 and it has the largest land area of any of the national monuments in the United States. 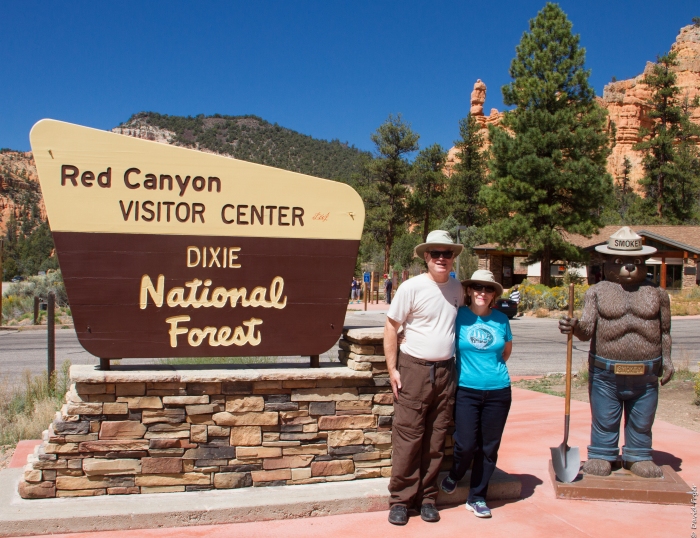 Our first stop on the Scenic Byway was Red Canyon.  Located on the western end of the highway, it is a five-mile canyon with tall spires and hoodoos that have been eroded out of the red limestone. The surrounding red limestone mountains with the green ponderosa pines and the yellow blooming sagebrush set against the deep blue skies was very picturesque – a feast for the eyes. 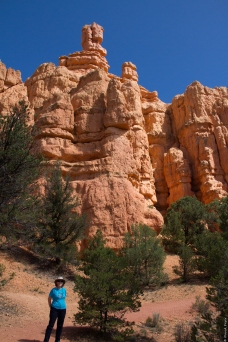 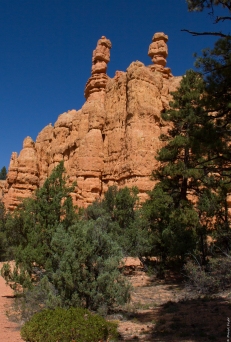 What are hoodoos? According to geologists, hoodoos are columns, pinnacles, or pillars of rock that have a totem pole appearance.  Over many years, rain and snow erode away the softer or weaker layers leaving behind the stronger layers.  The unique red, pink, and yellow color is due to tiny iron-rich clay particles found in the rocks.

The following day we took a hike on the Mossy Cave trail.  It was a short hike just off of the Scenic Byway. This particular trail led to a beautiful waterfall and a mossy cave.  Hoodoos and red limestone mountains lined the creek. 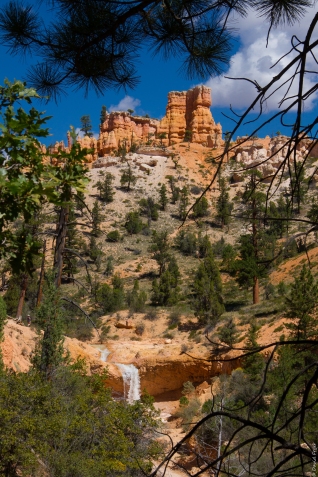 This creek was very important to the early Mormon settlers.  They actually built a canal to harness the water and direct it to Tropic, their town. 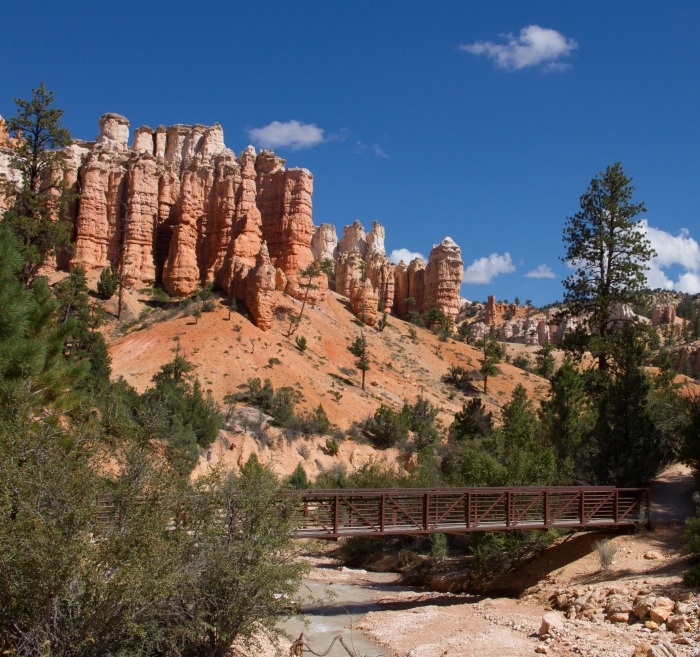 You can still see some of their handiwork along the creek bed. We were surprised to see that the waterfall had a lot of rushing water even in September. We also hiked to the cave. Mossy Cave is not exactly a cave, it is more like a grotto.  There are springs above it and the water seeps down through the rock.  Because it is so damp in this alcove, there is moss growing on the ceiling.  I told David that we could take a shower there because there was a steady stream of water dripping down through the moss.  It is no wonder why the settlers chose this creek as their water source.  Our hike on the Mossy Cave trail was delightful.

Although we only explored a small portion of the Scenic Byway, it was well worth our time as we were graced with some spectacular views.