“This is not what I expected,” said David when we arrived at Antelope Island State Park.  We had just left the hustle and bustle of Syracuse, UT and crossed the 6 mile causeway to the island. This oasis was in stark contrast to the heavy stop-and-go city traffic we had just experienced.

We were struck by how peaceful and quiet it was. On the island there is not a lot of development but there is some beautiful landscape and wildlife to enjoy.

As soon as we arrived on the island, we saw bison, antelope, mule deer and many birds.

Antelope Island is the largest of ten islands of the Great Salt Lake.  Antelope Island is 15 miles long and 5 miles across and has mountains through its center.  Its highest peak is Frary Peak at 6,594 feet.  The island is open year around and offers a number of trails and sandy beaches. In addition, the island boasts a large population of bison, pronghorn (antelope), bighorn sheep, some coyotes and bobcats, and a plethora of waterfowl.  All of the animals, including the bison, have free-range of the island.  We had several bison walking and grazing near our campsite. 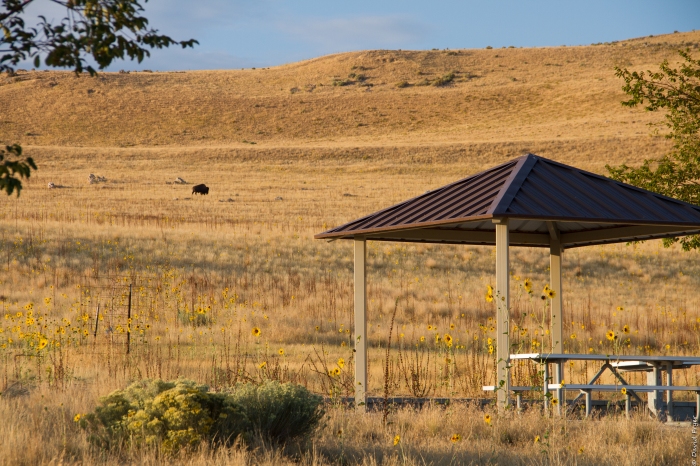 Antelope Island was only accessible via boat until the causeway was built about 50 years ago.  (It was called “The Road to Nowhere” by those who opposed its construction.)  The first Anglos to explore Antelope Island were John C. Fremont and Kit Carson in 1845.  It was they who gave the island its name when they discovered antelope grazing there.  The first settlers were Mormons and they engaged in ranching. They owned the island from 1848-1870. Fielding Garr established a residence there and it remains the oldest Anglo-built structure in Utah.  On this farm, they have been farming continuously for 133 years.  Today you can still visit this working ranch.

John Dooly, Sr. purchased the land and managed it until 1981 when the State of Utah acquired the land.  The cattle and sheep were removed at that time.  In 1893, John Dooley brought about 12 bison to the island.  This herd has become the largest and oldest publicly owned bison herd in the nation.  Every October on Antelope Island, there is a Bison Roundup.  All of the bison are moved to the northern end of the island where they are weighed, vaccinated, and given a health check-up. The herd is then thinned down to 500-750 bison.  Bison are either shipped to other locations in North America or sold at public auction.  The public is invited to watch both the Roundup and also the health assessment of the bison.

In addition to seeing wildlife, we enjoyed great views of the Great Salt Lake from the eastern and western sides of the island. The Great Salt Lake is 75 miles long and 28 miles wide and only 33 feet deep at its deepest point.  The lake is called Great Salt Lake because of the high salt levels that can reach as much as 25% by volume. Four rivers feed into the lake but the lake has no outlet.  The water level changes due to the runoff of the rivers, precipitation, and evaporation.  Also, the lake is too salty to support fish but there are briny shrimp and other marine animals that have adapted to this high saline environment.  The island does have some natural fresh springs that support the wildlife on the island.

We found out that people come to Antelope Island to enjoy a number of activities like swimming, boating, biking/cycling, horseback riding, trail running, hiking, bird watching, and photography.  There are a few amenities such as a small marina, grill, and gift shop.  Although there are a few people who work there, there are no permanent residents.

Even though it was not what we expected, we liked Antelope Island a lot because of its peacefulness, its beauty, and its wildlife.  It’s a place that we would like to visit again soon. 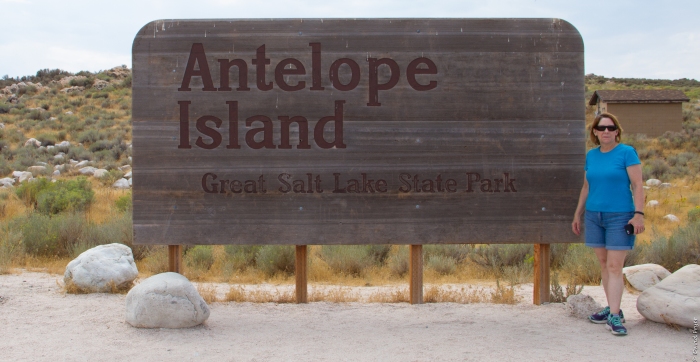