We are back in Eloy, Arizona after a long visit to the east coast to see family and friends.  It is great to be back in the warm weather and get out the shorts and t-shirts. We made the most of our time visiting Virginia, North Carolina, Georgia, and Florida.  We are  officially FL residents now!

One of the many wonderful advantages of full timing is the ability to visit with friends who live throughout the United States. David and I were able to catch up with some of our Richmond friends, Steve and Barb, who now live in Phoenix. We had kept in touch over the years but we had not seen them since they relocated to Arizona about five years ago.

When we arrived in Eloy, we called them to see if we might be able to get together.  They were very happy to learn that we were in the area.  They invited us to come to their home on Thanksgiving Day and to spend the night at their house so that they could take us to some of their favorite places near Phoenix the following day.  We were thrilled to get to spend some time with them and to learn more about the surrounding area.

We spent the first day catching up, eating a delicious Thanksgiving Day meal on the outdoor patio (Barb is a great cook!), and learning more about Arizona.  They told us about many interesting places and we hope to be able to explore some of them during our stay here. Also, they told us that Arizona is known for the 5 Cs: climate, cattle, cotton, citrus, and copper.  We were aware that the climate in Arizona is great, especially in the winter months, because there are lot of RVers who stay here in the cold weather months.  The other Cs surprised us.  Cotton, specifically the high quality pima cotton, was first cultivated by the Hohokam people more than 5,000 years ago.  We had noticed that there were lots of cotton fields in the area but didn’t realize that it has been and still is a major export for the state.  Actually, Pinal County (where we are camping) is the largest producer of cotton in Arizona. Even though the land is mainly arid, cotton production is possible provided it is irrigated.  Cotton requires a lot of water, a fact that has fueled some controversy given the diminishing supplies of water in the west. Citrus production is also prevalent. Arizona is one of four citrus producing states in the United States. You can see many citrus trees growing everywhere here. In the RV Park where we are currently, there are lemon, orange, and grapefruit trees scattered throughout the park and they are covered with fresh fruit. There are also a lot of cattle ranches. Cattle accounts for roughly a third of the state’s agricultural production. In the northern part of the state, where it is more mountainous, there are copper mines. Copper mined here provides 60% of the total copper production for the USA. We learned a lot about the state while talking to Steve and Barb.

The following day, Steve and Barb took us to visit a few of their favorite places near Phoenix.  We went to Tortilla Flats, Canyon Lake, and an old Western town.  Our first stop was Tortilla Flats where we enjoyed a great brunch at the restaurant there.  Tortilla Flats is a very small town east of Phoenix near the Superstition Mountains.  It has an official population of 6 people.  It is famous because it was the last surviving stagecoach stop along the Apache Trail.  In addition to the restaurant, there is a gift shop as well.  Tortilla Flats has preserved the atmosphere of the stagecoach stop. It was a very unique experience.

After our stop in Tortilla Flats, we drove to Canyon Lake and we took a cruise around the lake on the Dolly Steamboat.  Located in the middle of the Superstition Mountains, Canyon Lake is a 950 acre reservoir formed in 1925 when they dammed the Salt River.  It is also located in the Tonto National Forest and is a popular recreation destination for hiking, boating, fishing, and camping.

The Dolly Steamboat company offers lake cruises throughout the day. We enjoyed a 1.5 hour, 6 mile midday cruise.  It was a perfect day- beautiful, clear, and sunny. It was not too hot or too cold either! We sat at the front of the steamboat on the upper deck and had a great view. 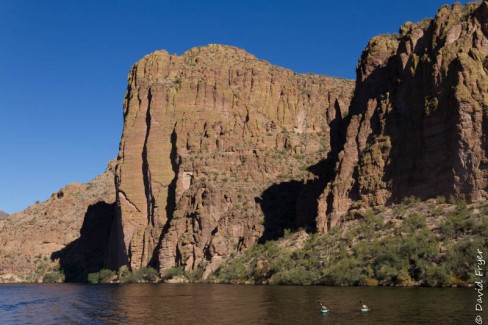 We saw some big horn sheep, a couple of bald eagles, and lots of water fowl along the way.  The Captain of the vessel also shared some interesting information with us as we cruised.  Although there were other watercraft on the lake and other people on the steamboat, it was very peaceful to be out on the water exploring Canyon Lake.  We can certainly understand why this experience is one of Steve’s and Barb’s favorites. 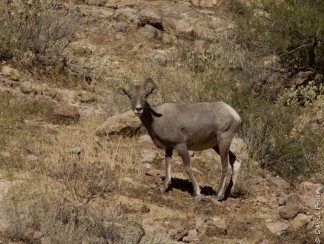 After our cruise, we drove to a reconstructed 1890’s gold mining town called Goldfield Ghost Town. They have tours of Mammoth Gold Mine, a historic museum, a chapel, several saloons, a general store, a blacksmith shop, and a jail.

We saw an old style Western shootout that they staged in the middle of town.  It was a fun to see what it might have been like to have lived in an old western town. 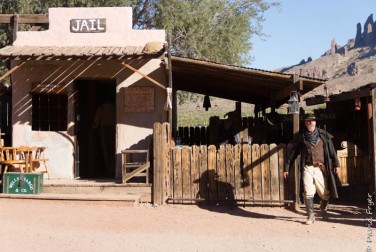 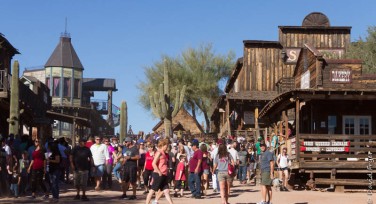 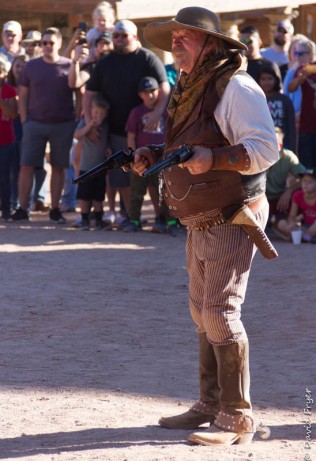 Thanks so much to our good friends, Steve and Barb, for being wonderful hosts and for sharing these wonderful places with us.

One thought on “Thankfulness”