One of the most beautiful and popular areas in Arizona is the Sedona red rock country. There are literally dozens of places to see the splendor that is this area. It can be very crowded with visitors from out of state or from the warmer city of Phoenix.

We had been warned numerous times about the crowds and had a difficult time acquiring a spot at Dead Horse Ranch State Park, our desired place to park. Because of the potential tourist congestion, Celia and I decided one day to check out the Red Rock State Park.  Because of the entrance fee, it is much, much less crowded, but still has great views and trails.

Red Rock State Park is located on the highway between Cottonwood and Sedona. This park, which is hundreds of acres, was once owned by a past president of TWA Airlines. He used it as a vacation getaway. More on that later.

The park has numerous interconnecting trails that are very well maintained and marked.  It was probably the best trail signage I have ever seen. Celia and I loaded up with water and started on the trail that leads toward the famous Cathedral Rocks. The views were great in spite of the Forest Service performing prescribed forest burns in the distance. It has been so dry this winter, that this may have necessitated taking these precautions.

As we climbed the ridge, we could see the house that Jack and Helen Frye built that they called the House of Apache Fires. Jack was president of Trans World Airlines during the time that this mansion was constructed. The large building high on a ridge overlooking Cathedral Rocks is called Apache Fires due to the Indian workers who declined to be housed in the cabins provided by the Frye family but rather stayed in tents along the creek. The workers’ open air fires prompted Helen Frye to name their house after the image of the smoke rising from the valley and surrounding the building.

The mansion was built in the 1940s with the beautiful red rock that was quarried on location and afterwards a large pump house was built over top of the exposed quarry. The master plan called for extensive additional building, but these plans never materialized as Mr. and Mrs. Frye divorced before completing the main residence.  After the divorce, Mrs. Frye completed additional work to the main residence and lived in the house until her death. 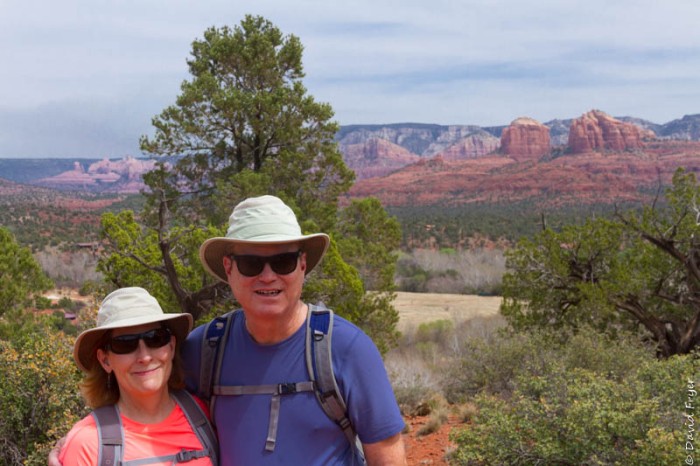 After a very enjoyable rim hike we left the park and found a coffee shop in Sedona. I had an ulterior motive as I wanted to wait until closer to sunset so that I could take some more photographs. Sedona is surrounded by wonderful scenery and even the coffee shop had a great view from the outdoor porch. After a while we started down the scenic drive south of Sedona.

The road from Sedona to Oak Creek (Hwy 179) passes some spectacular scenery and sunset is a perfect time to make the drive on the scenic byway.

The famous Chapel of the Holy Cross 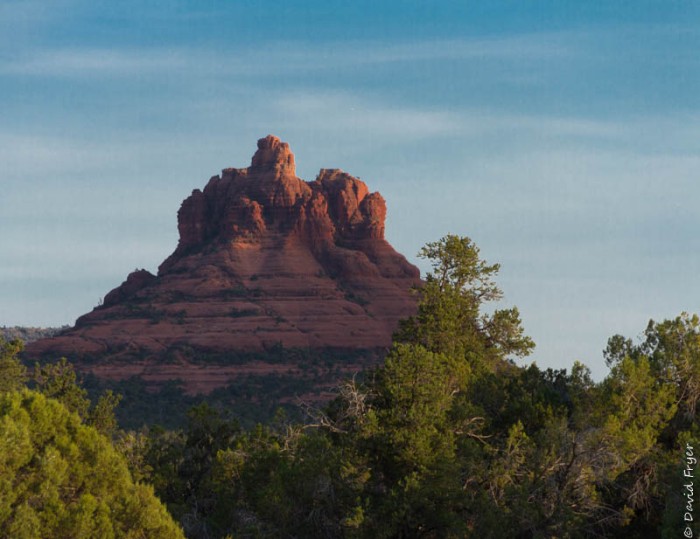 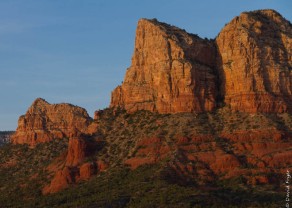 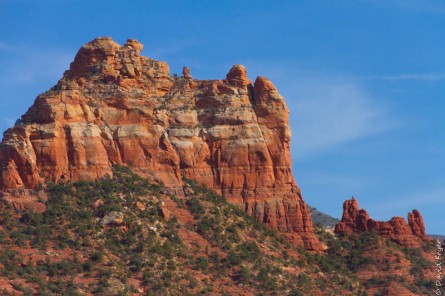 Like so many other places we have visited, there are so many more things we wanted to do, but did not get to do them. We have already started a must-do list for next time: Soldier Pass Trail, Hangover Rock Trail, Cathedral Rock Trail, Verde Canyon Railroad, Pink Jeep Tour, etc.