The Sinagua people, ancestors of the Hopi and Yavapai communities, inhabited the Verde Valley from 1125 to 1400 A.D. They built their dwellings on top of hills or into the sides of the surrounding mountain cliffs. There are a number of Indian ruins throughout this region and two of them have been preserved as National Monuments: Tuzigoot and Montezuma Castle. President Theodore Roosevelt designated Montezuma Castle a National Monument in 1906 as a part of the American Antiquities Act and President Franklin D. Roosevelt designated Tuzigoot a National Monument in 1939.  Both sites became part of the National Register of Historic Places in 1966. David and I took a day to find out more about this people group and these sites. 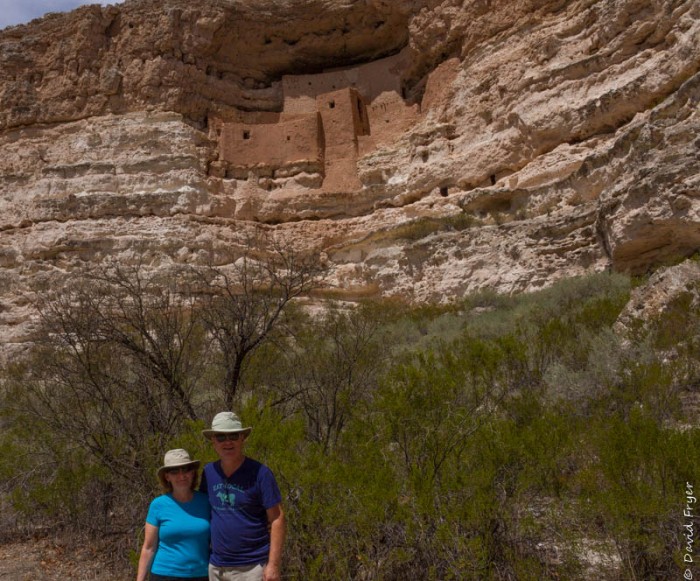 Montezuma Castle is located in Camp Verde, AZ. The name given to this place, Montezuma Castle, is a misnomer because it has no connection to Montezuma and it is not a castle.  European-American explorers named this place Montezuma Castle thinking that it had some ties to the Aztecs.  This site has nothing to do with the Aztecs and was abandoned 40 years before Montezuma was even born.  Nevertheless, the name remains to this day. 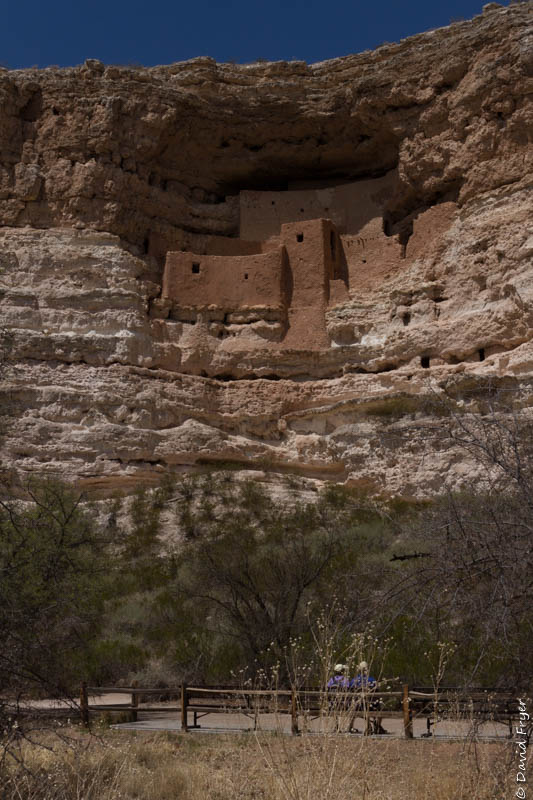 Montezuma Castle was built into the side of some limestone cliffs over a period of three centuries. These dwellings sit 100 feet above the valley floor along Beaver Creek.  There are 20 rooms in the main structure and it is 5-stories high and resembles an apartment complex. To access the dwellings, the Sinagua used portable ladders.  Alongside the well-preserved ruins is another apartment style structure that had 45 rooms.  Unfortunately, it has deteriorated but you can still see remnants of the original rooms.

Along with being hunters and gatherers, the Sinagua were farmers and grew beans, corn, squash, and cotton.  Many have wondered why they built into the cliffs and not alongside the creek on the valley floor where they farmed. There are several reasons for not having built their homes along the creek. The first is that the cliffs offered more protection from the elements – the heat in the summer and the cold in winter. The second reason is that the creek often floods during the summer monsoon rains and it was safer to be on higher ground.  Finally, they were more protected from attacks being high up in the cliffs.  Additionally, they had a good view of the surrounding area from their abodes.

These cliff dwellings are some of the best preserved in the Southwest. We enjoyed seeing the ruins and walking beside Beaver Creek. They used to allow you to climb up into the cliff dwellings but that is no longer possible due to the large number of visitors that come every year to this site. 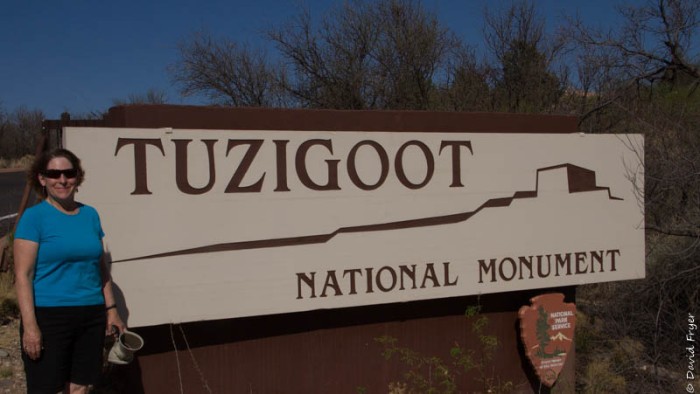 Tuzigoot National Monument (Apache for “crooked water”) is another example of the Sinagua people’s building and engineering skills.  Located in Clarkdale, AZ, these ruins are set high up on the top of a hill.  From this vantage point, you can see much of the Verde Valley, the Verde River, and the surrounding mountains near it. 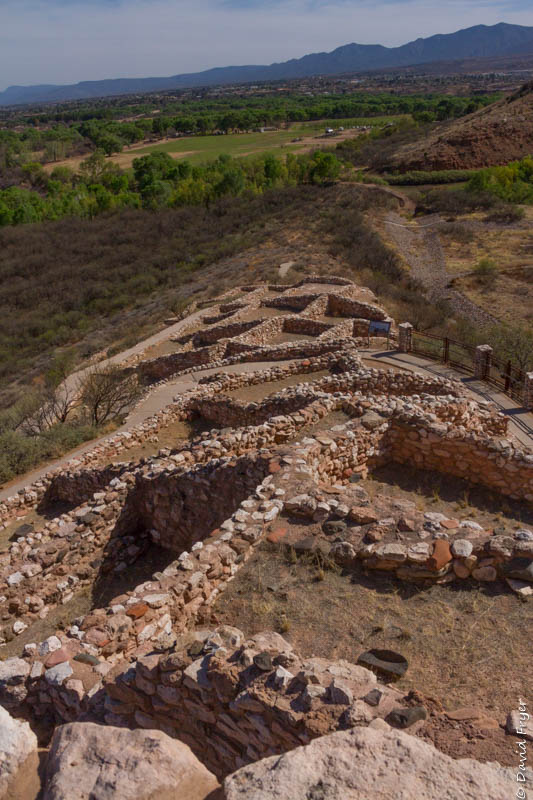 Tuzigoot sits atop a 120 foot ridge near the Verde River and, at its peak, it had about 200 inhabitants. The pueblo has two story buildings in places but most of the structures are pithouses.  There are 87 pithouses and a total of 110 rooms all made of stone.  One of the interesting things about them is that there are no doors.  The people would enter the house through a trap door style of opening in the roof and then climb down a ladder.  There is only one door in Tuzigoot and it is located in public area of the pueblo.  It is believed that this common area was used for trading and special events. 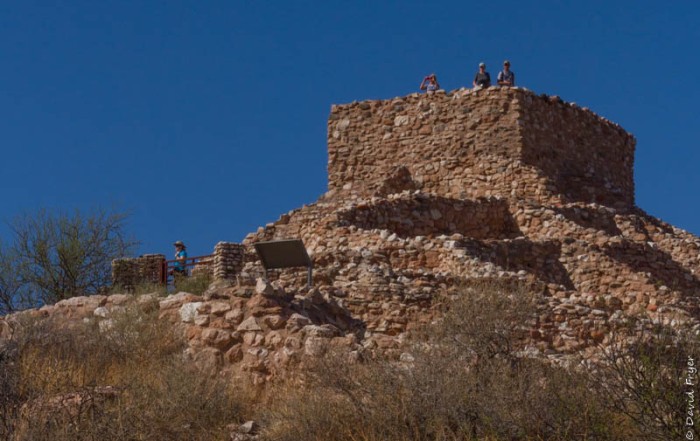 The site where Tuzigoot sits was originally owned by the United Verde/Phelps Dodge mining company.  It was sold to Yavapai County for $1 so that this site could be excavated and restored.  The county gave the land to the federal government and two archeologists from the University of Arizona, Louis Caywood and Edward Spicer, unearthed the ruins in 1933-1935.  The following year, Tuzigoot was prepared for public display and the Visitor Center was built. 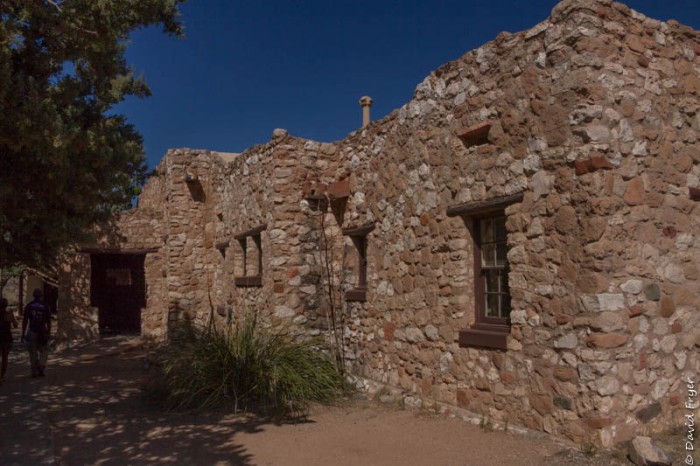 In the Visitor Centers at both sites, there are many artifacts such as stone tools, pottery, metates for grinding corn, bone needles, gemstones, etc.  The Sinagua people were traders and fine artists.  One of the interesting things that they traded was salt. There are salt mines in the Verde Valley. 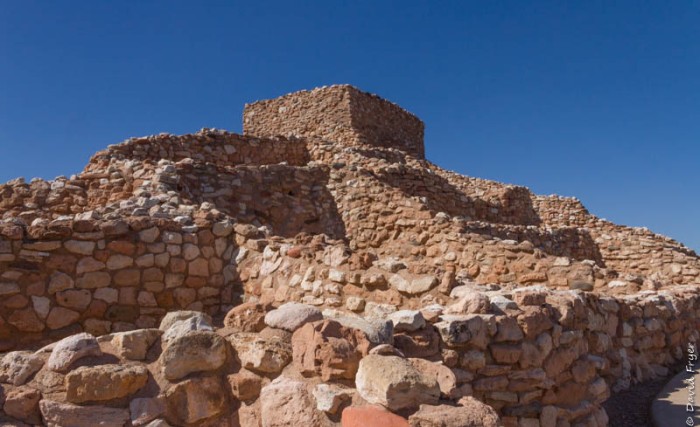 About 1400 A.D. the Sinagua people abandoned the Verde Valley.  Their departure remains a mystery. Scholars speculate that they could have left because of overpopulation, depletion of resources, disease, climate change, or spiritual beliefs.  We may never know what prompted them to leave this area and to migrate north.

David and I found both Montezuma Castle and Tuzigoot to be fascinating.  We recommend that you see both of these National Monuments.  They are well worth your time.

One thought on “Montezuma Castle and Tuzigoot”