It was another warm, sunny day so David and I decided to drive to a couple of famous waterfalls along the Icefields Parkway.  On the way to the first set of falls, we saw a “Bear Jam.” A “Bear Jam” occurs when a bear is spotted and a bunch of vehicles stop along the side of the road to take photos. We joined the other gawkers and watched as a black bear ate grasses beside the highway.  After a bit, the bear sauntered back into the woods and the “Bear Jam” vehicles dispersed. It was not long after seeing that bear that we saw a second one. We were so excited to see two bears in about 10 minutes’ time. 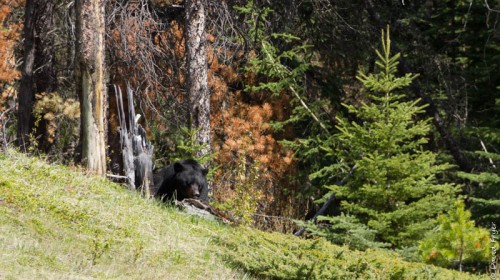 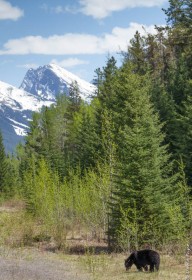 As we continued south on the Icefields Parkway, the Athabasca River was to our right. It is a wide river and is very full due to spring melting.  Normally, the river is an icy blue color but there is so much silt in the water that it is a brownish color right now. The Athabasca River starts at the Columbia Icefield and travels north through Lake Athabasca, Great Slave Lake, and the Mackenzie River system ending at the Arctic Ocean. This river’s waters traverse 3,852 miles (6,200 km) and is a lifeline for wildlife, towns, farm lands, shipping, and industry in northern Alberta. To protect this vital asset, the portion of the Athabasca River that is in Jasper National Park was designated a Canadian heritage river in 1989.

The Athabasca Falls is a very picturesque waterfall about 18.5 miles (30 km) from Jasper. It is a Class 5 waterfall with a drop of 80 ft. (24 m) and a width of 60 ft. (18 m). It drops into a deep gorge that empties into the Athabasca River. The force of the water has carved a number of potholes into the hard quartzite. In spring, the amount of water flowing through the gorge produces a loud roar that can be heard from a great distance. 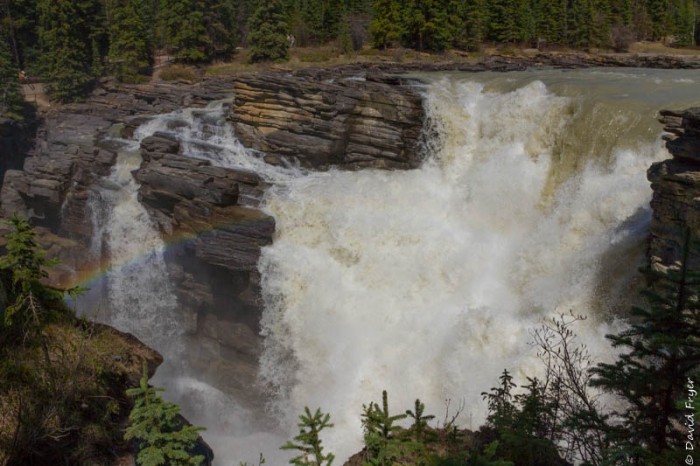 We spent some time here not only seeing the Athabasca Falls and its gorge but we also hiked down to the Athabasca River. It was so peaceful there and was in stark contrast to the churning and loud roar of the waterfalls above.

From there, we went to find the Sunwapta Falls. Its name comes from the Stoney language and means “turbulent waters.” The Sunwapta Falls is a Class 6 waterfall with a drop of 60 ft. (18 m) and a width of 30 ft. (9.1 m).

There are actually two sets of falls on the Sunwapta River but we only saw the upper falls. The Athabasca Glacier provides the water that feed these falls.  For that reason, the falls are more impressive in spring when the snow melts. 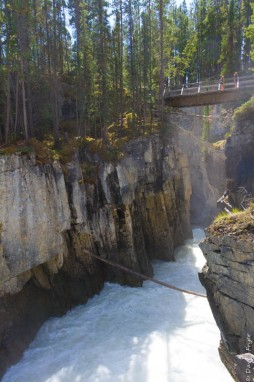 After visiting the Athabasca and Sunwapta Falls, we headed back to Jasper. As we were driving, another black bear crossed the highway in front of us. We slowed down and the bear remained on the side of the road so we were able to get some up close photos of the bear. It was fascinating to see three bears in one afternoon. 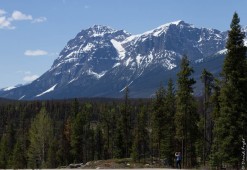 We have enjoyed our time in Jasper National Park immensely. It has so much to offer from wildlife viewing, majestic scenery, dynamic waterfalls, unspoiled glacial lakes, interesting hikes, boating, kayaking, rafting, and so much more.  We would absolutely recommend a visit to this Canadian Rockies jewel. We only wish we had had more time here.

3 thoughts on “One River, Two Waterfalls, and Three Bears”