We left Jasper and headed towards the beginning of the Alaska Highway, Dawson Creek. We debated which way to go: Highway 16 to Highway 97 or take Highway 40. We had heard that Hwy. 40 was rough but the alternates are several hours longer.  We talked to several people about the road and even went by the Jasper Mounted Police Department to ask them. We got mixed reviews but basically more positive for Hwy 40 than not.

The road was rough. It has narrow shoulders and the section north to Grand Cache has large amounts of construction. To top it off, the weather was cloudy and rainy. We took it easy and did not have a problem. We purposely do not plan a lot of miles in any given day and stopped for the night at Cutbank River. It is a free “user-maintained” parking area along the Cutbank River.  It has several dirt roads that are around the river area where RVs can park. This place has the added bonus of a food truck! This is the only food we saw for almost 200 km. The woman that runs the food truck is there from 7am to 9pm every day, serving hamburgers, hotdogs, chicken fingers, and poutine (google it). She and her husband live in a camper near the “fry stand”. He was very friendly and even gave us pointers on the best places to park.

From Hwy 16 to Grand Cache and then to Grand Prairie, there are no gas stations, houses, stores, except in the town of Grand Cache. The only things you see in between are facilities for extracting oil, gas, wood, and other petroleum by-products and associated transport. Because of this, large trucks travel Hwy. 40 day and night. These vehicles are much larger than what we see in the East of the US with tandem trailers that seem to be the length of two 18 wheelers. They aren’t sightseeing and scoot right past you on the roadway.

Arriving in Grand Prairie we found the Costco and filled up. Yes, some Costco locations have diesel and even bulk propane refills. On both items they have always the best price. One note, in Canada Costco does not take Visa credit cards, but rather MasterCard and debit cards.

We also purchased two 6 volt golf cart batteries at Costco to give us significantly more amp hours than what we have now. I will have to redesign the Bighorn battery compartment to accommodate the taller batteries. But that is a project for another day. 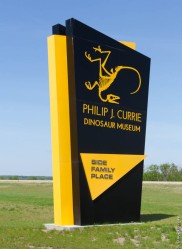 We continue our road trip toward Dawson Creek and decide to stop at the Currie Dinosaur Museum outside of Grand Prairie. It is a wonderful new facility that you would enjoy even if you are not “into” dinosaurs. It is supported by the National Geographic Society and has active researchers on location. 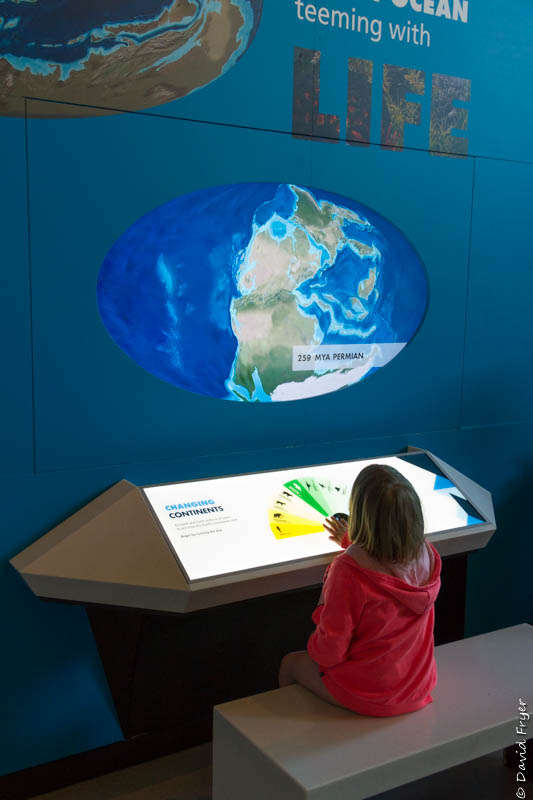 One interesting exhibit is an interactive one that shows the earth’s continent forms during the various millennia. I had read that Alberta was once under water but it was fascinating to see the changing ocean and ice locations during the varying periods of time. 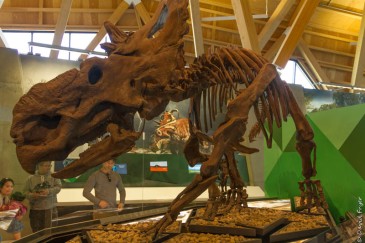 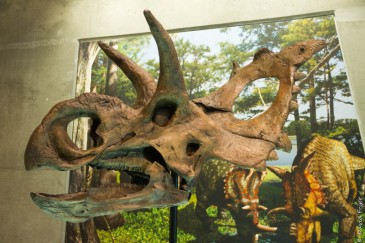 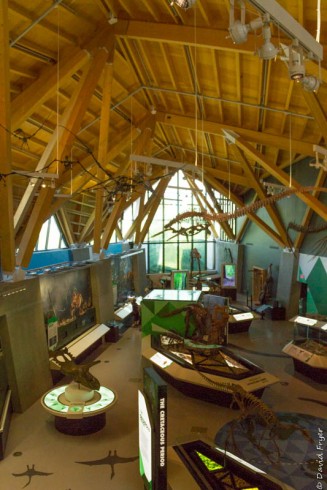 Large skeletons grace the main floor of the facility. 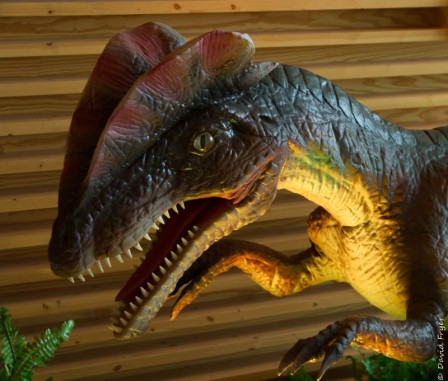 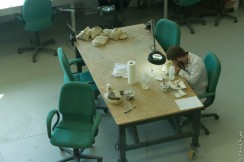 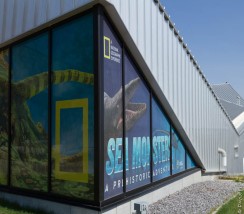 They also have a theater and show various movies, which ironically are not about dinosaurs. We watched one about saving pandas in China. 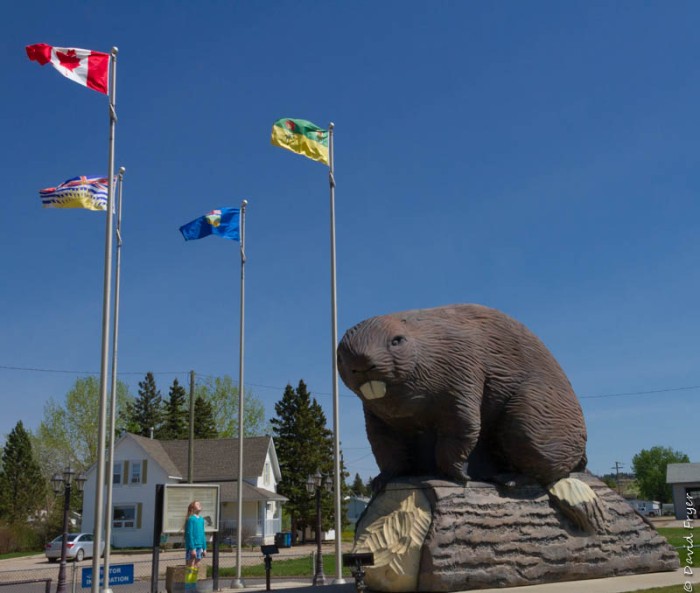 Next stop in our piddling around is the small hamlet of Beaverlodge. Just as the guidebooks say there is a huge beaver at the Visitor Center. Upon entering you are greeted by friendly volunteers who serve you free tea and cookies in the building’s tea room. You are surrounded by history especially when you realize that the building is the old hospital and still has all the rooms labeled for their original function. 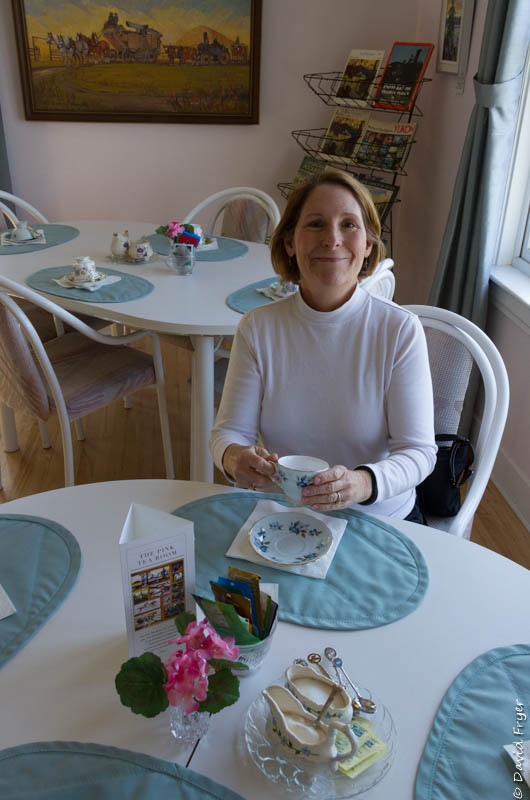 This stained glass wall is in honor of a local artist who loved horses. 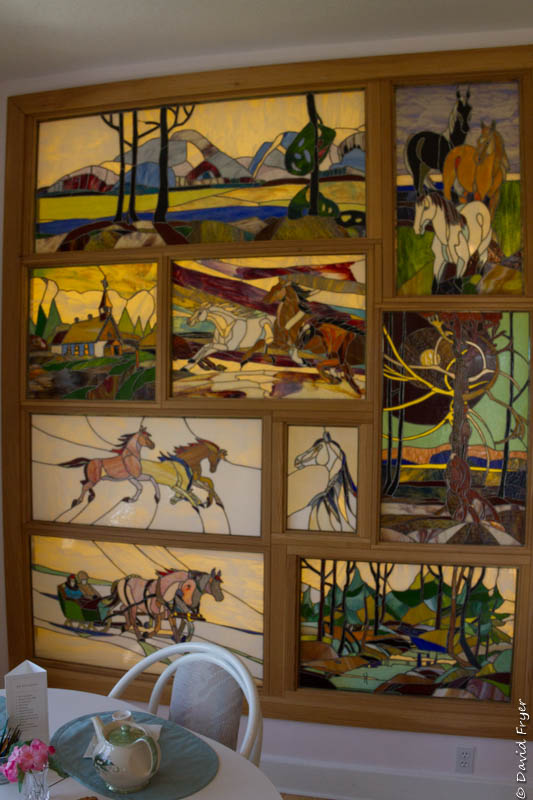 In Beaverlodge we also washed the very dirty Silver Fox and Bighorn after travelling Hwy 40.  Suffice to say, they had to clean the truck wash when we finished!