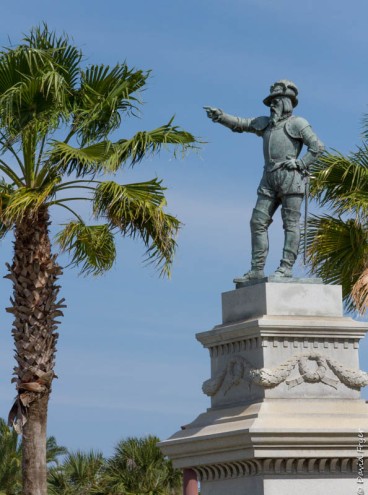 We had visited St. Augustine, FL some five years ago in March and found the town packed with visitors, so much so that we left early and ventured to other areas of Florida. During our second visit which was this month, we could not have had better weather and much smaller crowds. Don’t get me wrong, there were plenty of tourists but it was manageable. This turned out to be one of my favorite visits this year. 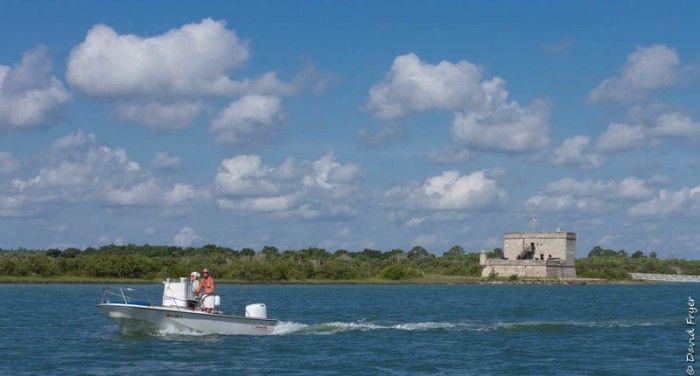 Celia and I stayed on Anastasia Island, just a short drive from the town itself. We first visited the Fort Mantanzas which is about 25 minutes south of town. It was a fortified watchtower built to protect the Spanish city of St. Augustine from the French, British, and pirate attackers. Fort Mantanzas was important because it protected the southern end of the city of St. Augustine. Ships approaching via this inlet could avoid the large Castillo de San Marcos and attack the city and be beyond the range of the city’s cannons. This need became obvious when the British Governor of Georgia, James Oglethorpe, traveled up the inlet and laid siege to the Spanish city. 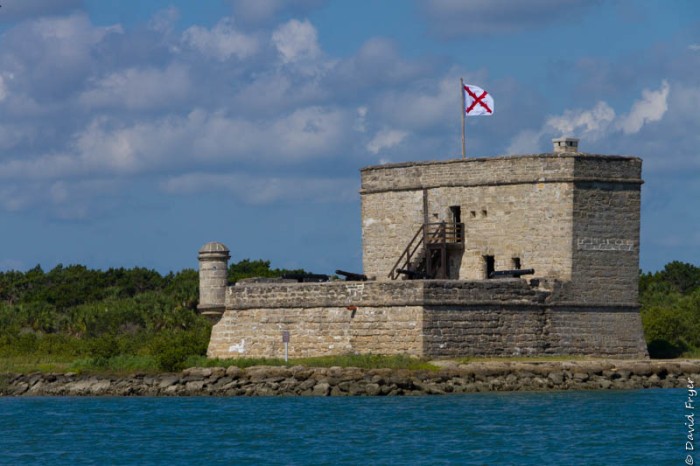 Built in 1742, the fort was fortified with five cannons and it still has two of the original ones on display. About nine soldiers manned the coquina (Spanish for little shells) built structure on a month long rotation from St. Augustine. That same year Oglethorpe returned with 12 ships but did not engage the city after his scouting ships were fired upon. 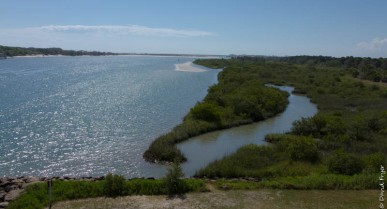 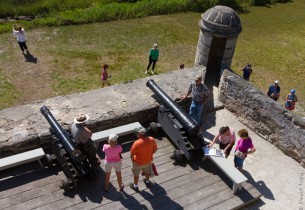 The park service provides a free ferry to transport the visitors to the fort on Rattlesnake Island. The ranger guided tour helps with the history and reasons for the fort’s existence. While free, tickets are required from the visitor center and you will want to get them in advance for this popular historical site. 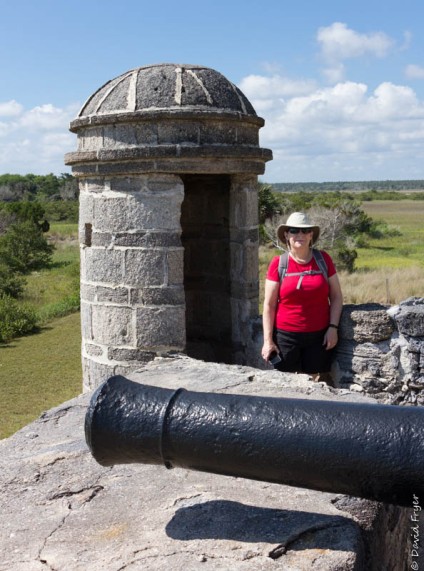 After the short ferry ride across the inlet, the group was given time to explore the restored fort. The top of the tower gives the visitor great views of the area including the Mantanzas inlet, Rattlesnake Island, and a nearby bridge. Note the Spanish Cross of Burgundy flying from the fort. 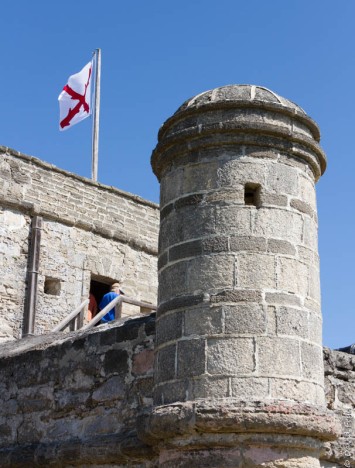 One of the jewels of the city of St. Augustine is the Castillo de San Marcos at the pinnacle of the city. This large fort constructed from Florida coquina was built starting in 1672, but has been modified over the years. It was commissioned because of attacks by the British and its history includes a failed 1740 siege by Georgia Governor James Oglethorpe.

The Castillo de San Marcos has four large arrowhead shaped bastions that provide excellent firing positions upon attack. The townspeople would cram inside the fort when the city was attacked saving their lives but viewing the destruction of their homes and city by the attackers. 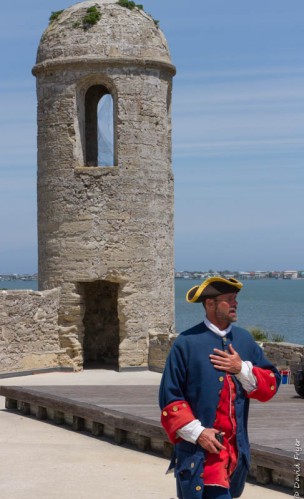 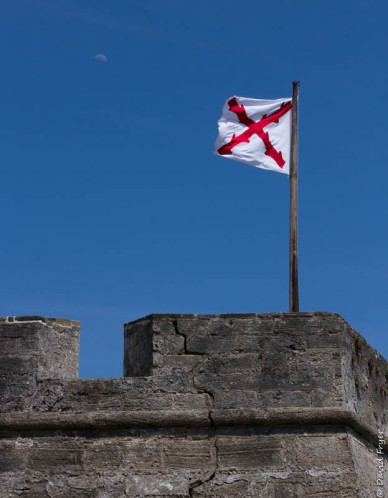 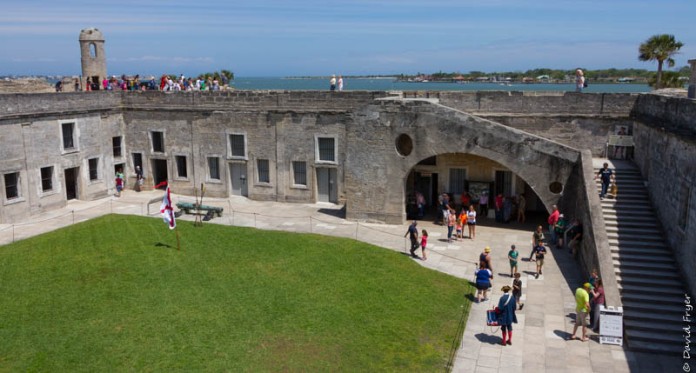 Ironically, the fort has been in the procession of four military powers: Spanish, British, United States, and Confederate. The name of the fort changed based on which country controlled it, for example Fort Marion. The National Park Service restored it to its original Spanish name of Castillo de San Marcos. 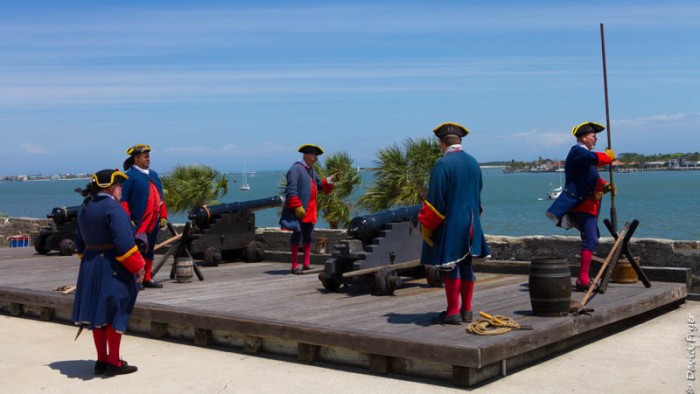 The fort provides daily cannon firing demonstrations that are very popular with the visitors. Actors in Spanish period dress demonstrate the many steps that were drilled repeatedly by the soldiers who would not have been able to read or write. Except for the words “cover your ears,” the commands are spoken in Spanish. After the smoke clears and equipment is stored, its time for some group photos.

The view from the curtain wall includes the inlet, city of St. Augustine, and the famous Bridge of Lions. 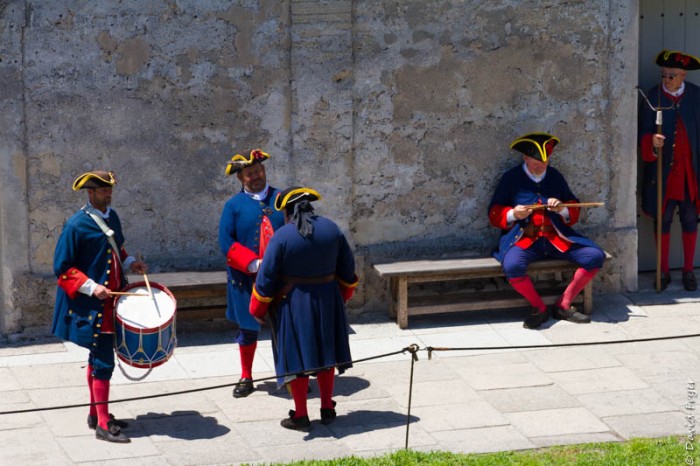 Many of the fort’s rooms have historical displays and memorabilia which can be viewed. Of course there is a gift shop and a short movie about the fort. The entrance is free with a National Park Pass. 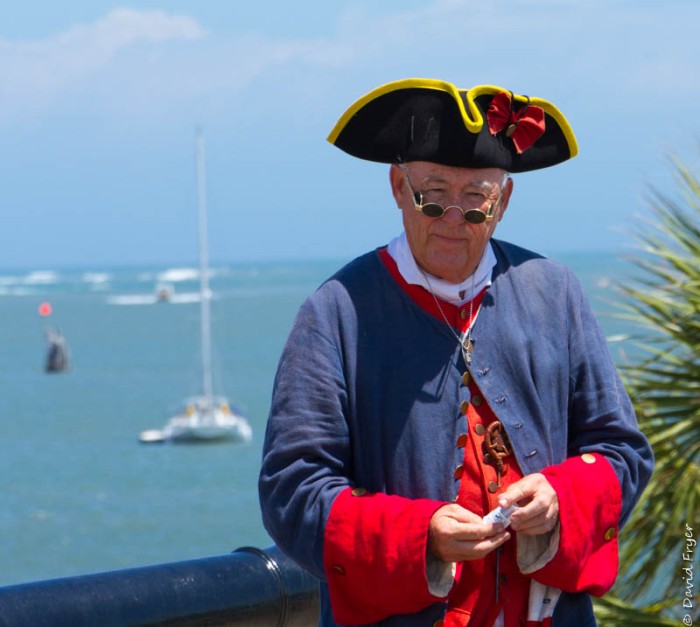 Part two of our St. Augustine visit will be coming soon in our next post.

One thought on “Better the Second Time – St. Augustine”