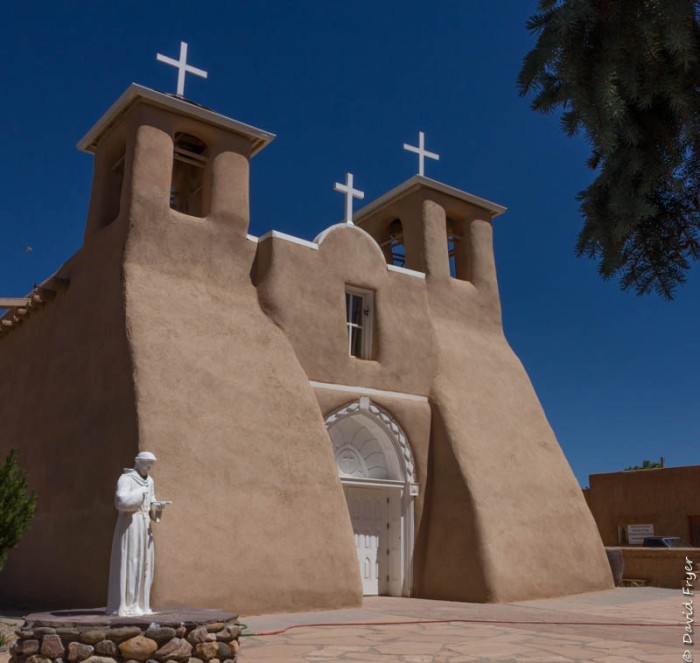 We continued our month-long visit to the NE New Mexico area by moving from Santa Fe to a small campground near the historic city of Taos. The Pilar Campground in the Orilla Verde Recreation Area is located in the Rio Grande del Norte National Monument. What we did not realize until we arrived was that we were staying next to the Rio Grande which cuts a tremendous gorge through a large mesa for many miles. 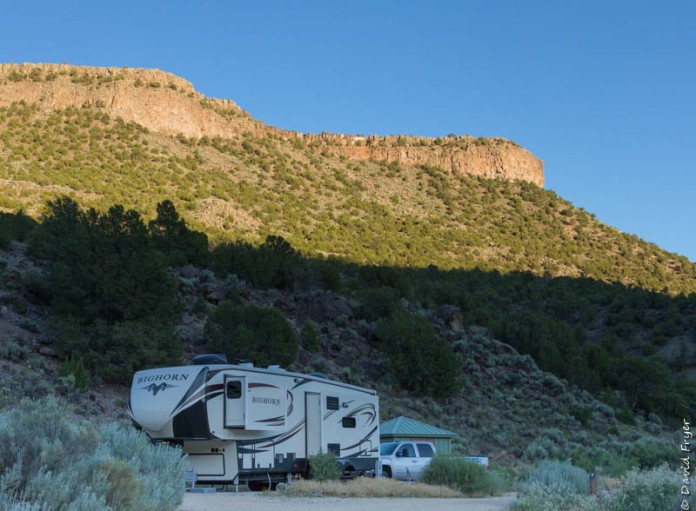 The river this year was at peak flow and the rafting companies were bringing folks daily to the Rio Grande Gorge. They were hoping to make up for several previous poor rafting years. Fortunately for us, the large amount of snow pack and winter rains have made not only for good rafting, but an abundance of wildflowers this spring. 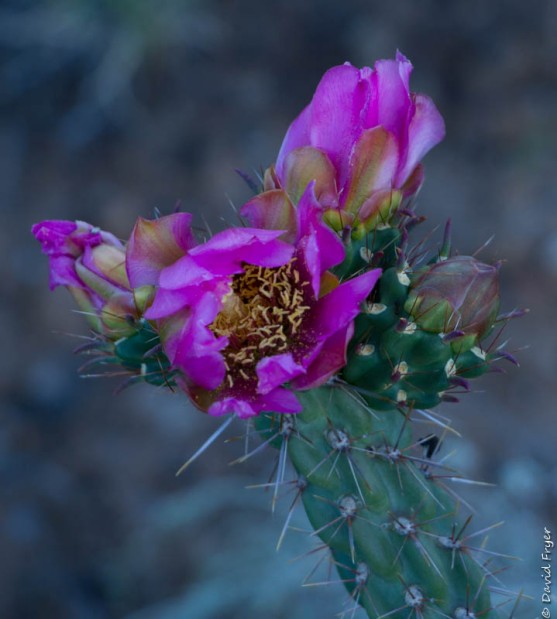 We were parked down in the river valley with beautiful views of the area. We took advantage of being in the gorge and did some hiking and sightseeing. 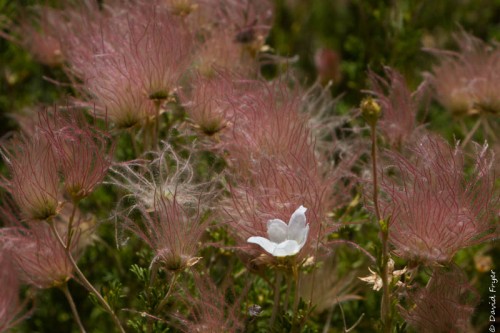 The Vista Verde Trail was recommended by several folks and it did not disappoint. The wildflowers were plentiful and we spotted some local bighorn sheep that call the gorge home. In fact, one kept a watchful eye on us while we stopped for a while at the end of the trail. 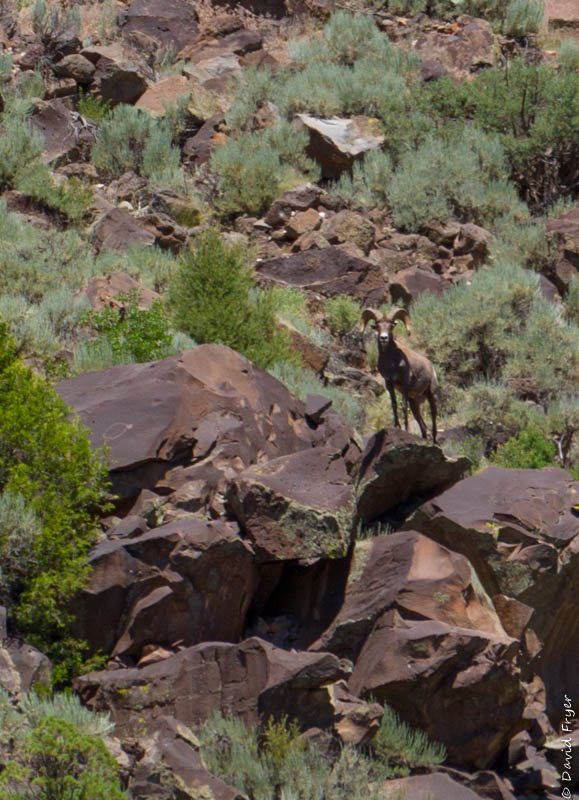 Farther up the river is an important local landmark, the Rio Grande Gorge Bridge. The bridge which is now a state park has a tremendous span over the river and draws quite a crowd. 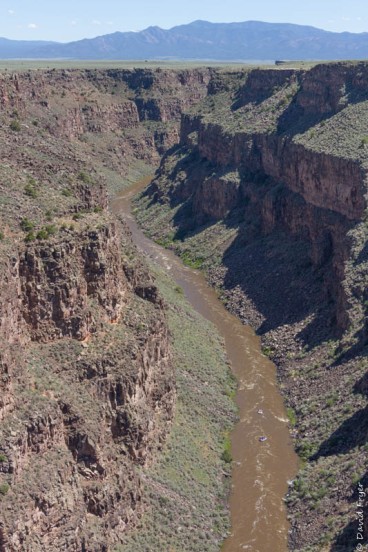 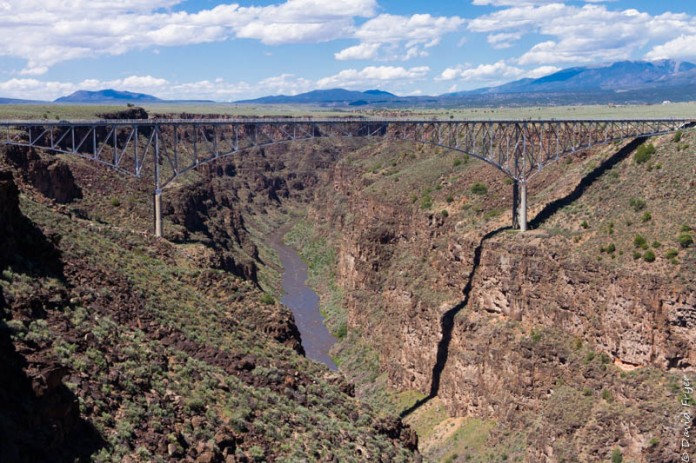 It is one of the top 10 highest bridges in the U.S. and has been featured in many movies.

New Mexico is very RV friendly and you see them everywhere, even crossing the “High Bridge” as the locals call it. 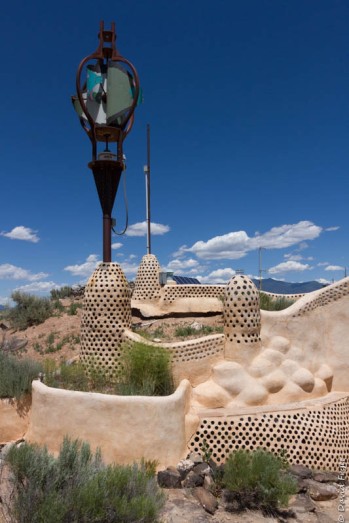 Close to the Rio Grande Gorge Bridge is the “Earthship” community. Called the Earthship Biotecture, this “off-grid” collection of homes feature construction of recycled materials like used tires filled with dirt. These homes generate power, collect/treat water, grow food, and heat/cool even though they are in the high desert area of Taos. These uniquely designed and constructed homes are touted to be viable internationally in various climates and conditions. In the Taos area, winters reach minus 30 below Fahrenheit and these homes do not require auxiliary heat!

The “tour” was a disappointment as it was basically a walk-through the visitor center without being able to visit a home itself nor even being allowed to walk down many of the streets. This is an active community and the members’ privacy is being protected.

Even though tires and adobe are the primary building materials, bottles and cans are used for decorative purposes as well. 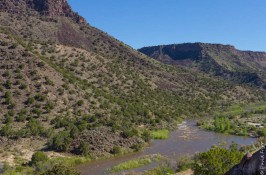 While we were on a hike, some friends we met on our Alaska trip last summer parked right behind us in the Pilar campground! We knew they were in the NE New Mexico area, but this was quite a surprise. We got to go on a hike together, catch up on what we have been doing, and dream of going back to Alaska before they took off for Colorado. 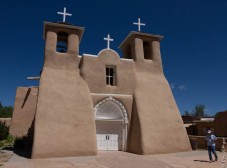 One of the places that we definitely did not want to miss was the San Francisco de Asis Church on the outskirts of Taos. This mud and straw built adobe church is a National Historic Landmark from the 18th century.

This beautiful church, which began construction in 1772, is also the subject of one of Georgia O’Keeffe’s famous paintings and is wonderful to photograph. Maintaining the abode structure is an ongoing task and work was being performed on the building while we were there.

Photographs were not allowed inside the church, but it is adorned with eight imported oil paintings and a hand carved altar screen. These historic Spanish churches are wonderfully simple in design but striking at the same time.

This is the perspective that O’Keeffe used in her painting (Ranchos Church, New Mexico, 1930). Note the just repaired adobe.

The Taos area was new to us and fun to explore and at the campground Celia had her own special spot to paint.

Up next, more of Taos including an adobe village still occupied after 1000 years.