As we mentioned in a previous post, we are in a remote area of Arizona about four miles from the Mexican border, in the Organ Pipe Cactus National Monument. There is one town about 45 minutes-drive north of us called Ajo (ah-HO). This town, called “garlic” in Spanish, is a quaint village with a beautiful old central plaza that was built in 1917. 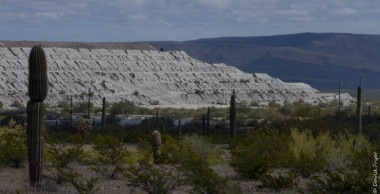 Ajo was a large mining town and when driving south you can see the incredible mile-long tailings and containment ponds of the New Cornelia Mine. It was the first open pit mine in Arizona and produced billions of pounds of copper before it was closed in 1983.

Around the town square are the post office, a library, a coffeehouse, the visitor center, and an art gallery. 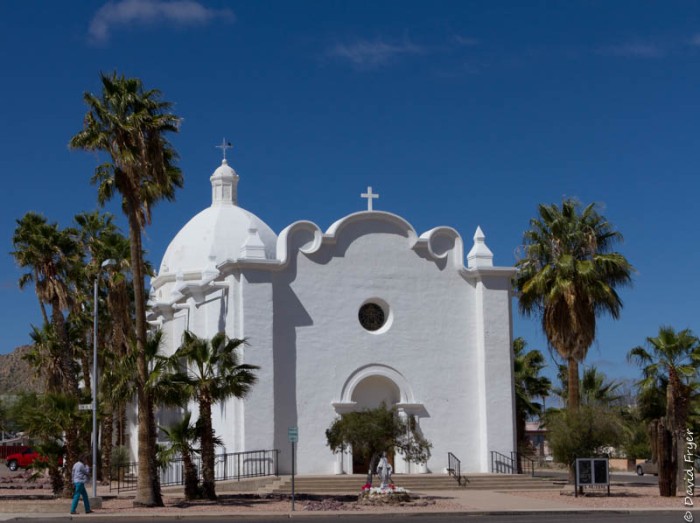 Adjacent to the square is a beautiful church that commands the skyline, the Immaculate Conception Catholic Church that was built in 1925. The Catholic and the nearby Federated Church are of Spanish Colonial Revival architecture and are across from the town’s historic train station. The railway station now houses the Visitor Center and completes the boundary of the historic Ajo Plaza. In fact, in Ajo there are over 100 homes and buildings on the National Historic Register. The Visitor Center also has a walking map of the historic area. It is an easy 30 minute trek around town. 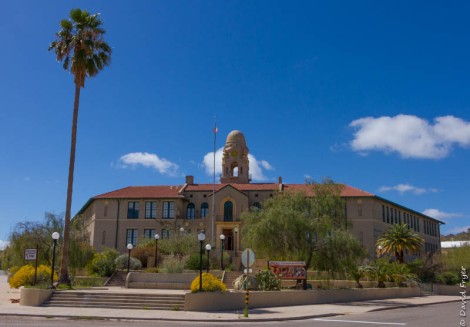 One of these National Historic Register buildings is the Curley School that dates back to 1919. It has now been renovated for artist residences and studios and there are over 30 artists who live there. The building features a Moorish bell tower that, according to a local, if you look closely, it features a face on all four sides.

This is considered an “artsy” town partly, I assume, because of the large artist housing facility, but also because of the numerous murals found in and around the town. When the mine closed and thousands left the town, the residents sought to reinvent Ajo for a new day. 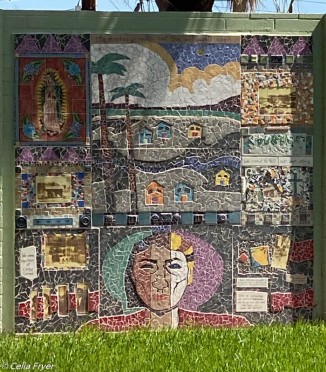 Adjacent to the town square is the Triangle Park that has numerous murals.

Not too far away is the whimsical Ajo Copper News building. 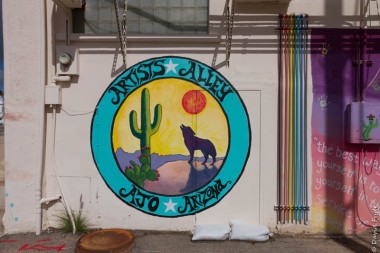 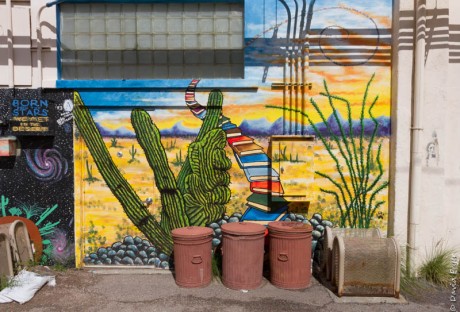 The Artist’s Alley, just south of the town square, has the largest concentration of art work but is within easy walking distance from the center of town. 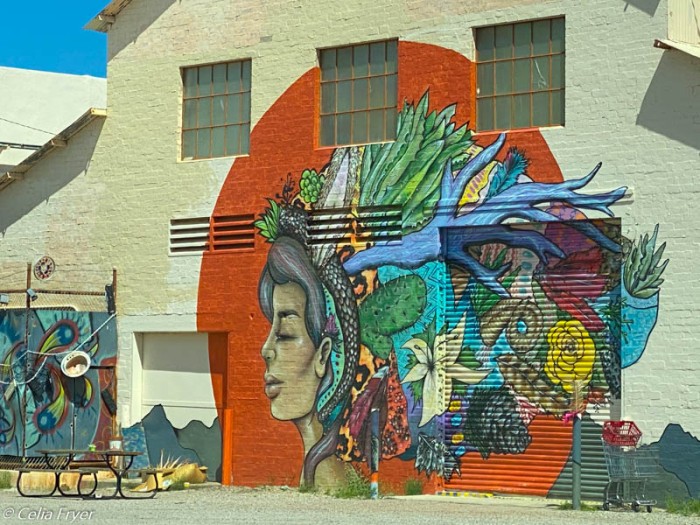 Celia and I had a lot of fun exploring the small historic area and had a beautiful day to do so. 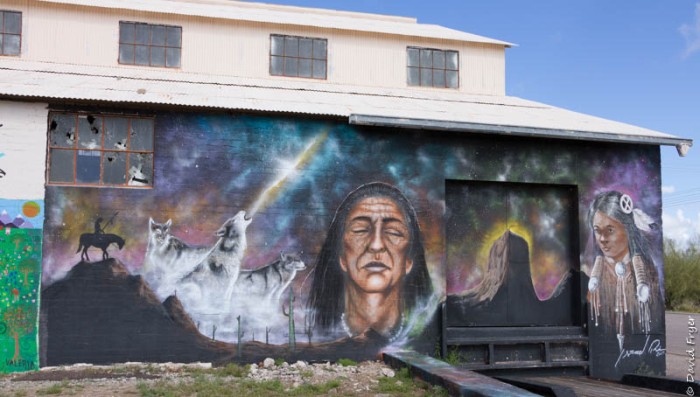 We did have some errands to run while we were in town including picking up some groceries. Ajo has one nice grocery store which probably would have been well-stocked had it not been for the Covid-19 pandemic. In fact, current shoppers are allowed to purchase only one of any individual item, that is one potato, one orange, or one apple. Much of the produce was non-existent anyway, so we explored purchasing frozen items which we not accustomed to doing. Frozen foods turned out to be in short supply as well. Fortunately, in spite of the limited quantities, the store had the foresight to limit purchases so there were some remaining items to buy. We have seen friends Facebook posts from larger cities that show that the store shelves there are literally bare.

Everyone seems to be taking the shortages in stride, except a lot of grumbling about the lack of toilet paper. For many, that seemed inexplicable and frustrating at the same time.

I said that there is only one town in the region, but that is not true. Nearby at a crossroad is the “town” of Why which is basically a fuel station/restaurant a few miles from Ajo. The store is predicatively named the “Why Not.” With so many Canadians and Americans racing to cross the Mexican border back into the U.S. before it closes, even this location was a hopping place.

We were able to run all the errands we needed to do while in town, plus we took the walking tour of the historic district. We enjoyed visiting the town “Where the Summer Spends the Winter.”