Our National Parks offer some really wonderful Ranger-led talks and hikes.  We have found them to be very educational and enjoyable.  This afternoon we joined a group of 19 other Park visitors and hiked to Swan Lake. Our hike was an easy, three-mile walk. We walked from Colter Bay through a very lush forest to two lakes, Swan Lake and Heron Lake.

At the lakes, we saw trumpeter swans and Canadian geese when we reached the lake.  Also we saw a beaver lodge and his dam.  In the forest area, the wildflowers were a sight to behold.  It seems that the snows were especially plentiful this past winter and the wildflowers are numerous.

Sean was the interpretive ranger who led our group. This is his third summer at Grand Teton National Park and he is majoring, not surprisingly, in Parks and Recreation.  He guided us along and stopped at several intervals to share information about the national park, the Grand Tetons, the fauna found in the area, and the greater Yellowstone Basin.  His commentary really did enhance our hiking experience. 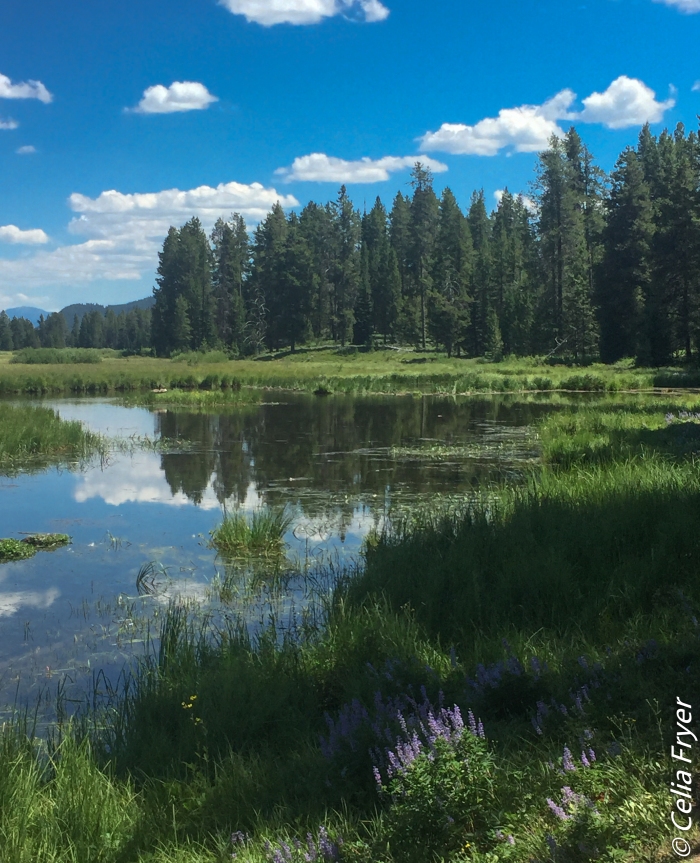 One of the things that we learned from Sean was that these two lakes are covered with Rocky Mountain lily pads.  These are a favorite of the moose because they like to dive down, grab the seed pods, and eat them.  A moose can dive as deep as 15 feet to retrieve one of the pods.  When they eat them, they also disperse the seeds which in turn results in more lily pads.

Unfortunately, we didn’t see a moose out there.  I keep hoping to see one while I am here.

Sean also told us about the reintroduction of wolves into the park.  They had been killed off and, as a result, the elk population grew significantly as did the coyote population. With the reintroduction of the wolves, the eco system is more balanced now.  Bison were also reintroduced to the park.  Now the largest percentage of bison in the United States live on nationally protected lands. He also told us that there are 1000 black bears and 700 grizzly bears living in the greater Yellowstone Basin.

There is also a beetle that is attacking the Lodgepole pines in the area.  Since these beetles are indigenous to the area, they do not try to control them with pesticides even though they are killing the trees.  It seems that fire is the only remedy for this infestation.  He said that the Berry fire last summer was the largest in the history of the park burning 22,000 acres.  We had driven through parts of the park that had burned last summer and you could already see new growth in less than a year.

One the fun things about participating in the ranger-led hikes is that you learn some more about the area and you also get to meet people from all over the United States and the world.  On our hike, there were people from Ukraine, Texas, California, Iowa, Florida, etc.  It was fun to share this experience with others.

After our hike, we rewarded ourselves with some more huckleberry ice cream.  While we were sitting outside the grocery store, we got to talking to several people.  Guillón was one of them. He was from Bordeaux, France.  We found out that he is biking from Boston to San Francisco over the course of two months.  He says that he averages 60-100 miles a day.  He started in Boston on June 8th and hopes to be in San Francisco by August 7th.  When he traveled from France to the United States, he brought his bike with him.  He had several interesting stories to tell us about his cross-country journey.  After talking to him, our three mile hike paled.

Last night we walked around our campground a bit.  We had been told that there was a den of foxes in the campground so we set out to find them.  The campground had cordoned off the area to protect them so they were easy to find.  We were fortunate that we were able to see one of the pups come out of the den while we were there.

We thoroughly enjoyed our short hike today and we are hoping to take another longer one tomorrow.