David and I have been to many pizzerias in our lives but we have never been to one like Organ Stop Pizza in Mesa, AZ.  Not only is the pizza good, but the entertainment is what makes it so unique.

Organ Stop Pizza has a theater style Wurlitzer pipe organ at the front of the dining area.  This pipe organ was originally built for the Denver Theater in Denver, CO in 1927.  When it was moved to Mesa, AZ in 1984, the organ was rebuilt and was enlarged to 23 ranks/sets of pipes making it the largest Wurlitzer organ in the world. 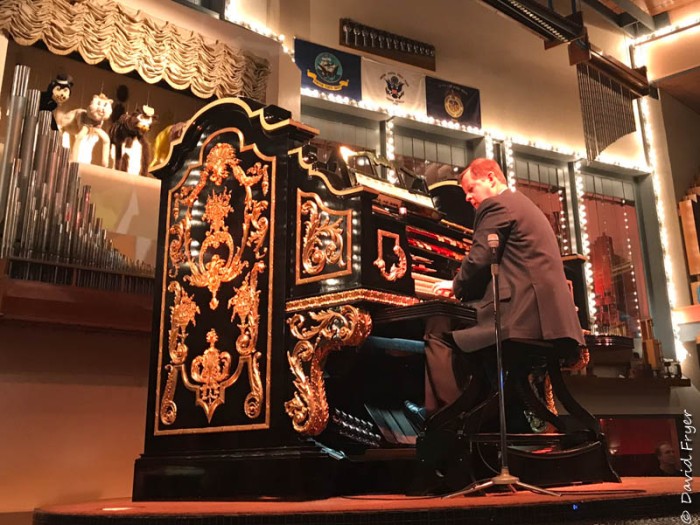 The Wurlitzer organ sits atop a rotating hydraulic elevator.  When the show begins, the organ rises up from below the platform.  In addition to the organ there is a set of 32 feet wood diaphones on either side of the organ.  Surrounding the dining area, there is a myriad of other percussion instruments like xylophones, glockenspiels, drums, etc.  The dining room has a 43 foot high ceiling and great acoustics which ensures a wonderful listening experience.

There are four organists who play this largest theater pipe organ and they are impressive musicians.  All of them are acclaimed members of the American Theater Organ Society and hold advanced degrees in music.  All of them have performed concerts in national and international venues.  We were impressed with their musical talent.  At Organ Stop Pizza, they give a 45 minute concert and they do not have any sheet music in front of them.  They play everything from memory.  They take requests from the audience and then weave them together into a musical set. We stayed for several sets and we were impressed by the variety of the songs played. They played Disney-themed music, a series of songs from Star Wars and Star Trek, musical selections from the 30’s and 40’s, music by the rock group Queen, patriotic and military medleys, songs from Broadway such as Phantom of the Opera, Christian hymns, etc. People really enjoyed the music and, as the music played, people would sing along.  This made the experience even more fun! It was truly remarkable to hear such capable musicians play this amazing organ and the price of admission was the price of a pizza.

Organ Stop Pizza is a very popular place.  When we arrived, the line was out the door. We thought that we would have to wait for over an hour to get in but that was not the case.  The line moved quickly and we were able to find a place to sit in the dining hall without much difficulty.  We did move to another table with a better view a little later. We enjoyed listening to the organ while we waited for our food to be prepared. The pizza was very good and they even had Gluten Free pizza that was very tasty.  If pizza is not your preference, they also offer salads, pastas, sandwiches, and ice cream.

This was our last stop before leaving the Phoenix area and heading south.  What made the experience even more special is that we were joined by our good friends Jim and Jan who were camping near us in Mesa, AZ.

We would highly recommend Organ Stop Pizza.  It was a truly unique dining experience and we hope to go there again the next time we are in the Phoenix area.