The Jasper Skytram is the highest and longest aerial tramway in Canada and it is just up the road from the Whistlers Campground. Built in 1964, the tram soars to 7,470 ft. above sea level to the top of Whistlers Mountain. Traveling at 1,673 ft. per minute, you arrive at the top in 7.5 minutes.  The trams depart every 9 minutes.

Once you reach the top, you are treated to a great view of the Victoria Cross and Maligne mountain ranges, numerous lakes, and the town of Jasper. If you hike about a mile farther, you will have a 360 degree view of the entire region.

We were lucky enough to have a clear view of Mt. Robson (12,972 ft.), the highest mountain in the Canadian Rockies.  Due to its altitude, it creates its own weather and according to an employee is only visible about 20 days a year from this viewpoint. 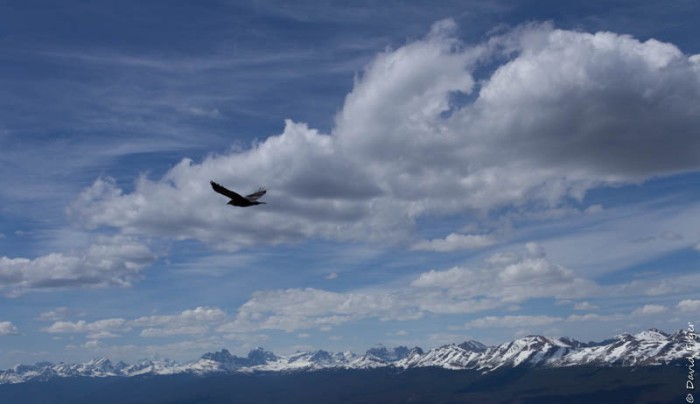 When we arrived at the top, we quickly had to put on additional layers of clothing because it was so much colder there and the wind was blowing.  Be sure to bring extra clothing, water, sunscreen, and good hiking shoes. The trail to the summit is gravel and very steep in places so you will want to come prepared. Since they open as early as March, the shop also rents snowshoes so you can climb to the top guided by the bright colored snow poles.

There are a number of animals that call Whistlers Mountain home.  Among them is the ptarmigan. David spotted it as we were exploring some of the side trails on our hike up.

Although we intended to hike the 1.4 km to the summit, we did not quite reach it. There was still a lot of snow on the last part of the trail.  Our tram operator, who was from Australia, said that the snow could be “thigh deep” in places so we stopped just shy of the summit.

We did have to traverse some sections where the trail was still covered in snow but was not as deep.

When we got to what they call the “false summit” which is just below the actual summit, we were rewarded with views of the Icefields Parkway and its surrounding mountain ranges.

Also, there was a big red Adirondack chair positioned overlooking the valley below.  These red chairs are located in scenic places by the park system, so that you can sit there for a while and soak in the beauty.  That is exactly what I did!

After our hike, we stopped for a cup of coffee at the restaurant at the top of the Jasper Skytram that is called Summit Restaurant. It offers breakfast, lunch, and dinner during the tourist season. Moreover, the view from the restaurant is fabulous. It was a great finish to a wonderful experience.

Going to the top of Whistlers Mountain via the Jasper Skytram (you can hike up there too – 6.8 km) was a splurge for us. The cost is CAD $46.95 per adult person but it was well worth it. Be sure to the check the hours before you visit as these vary greatly depending on the season. There is also a webcam so that you can check out the 360 degree view before you visit.

P. S. In the fall, they have special star gazing sessions at night.