After a visit to Celia’s parents in Wilmington, NC over Easter weekend, we visited with some friends in Clinton, SC for a few days. Our friends, Tom and Ginger, invited us to camp in their driveway, “moochdocking,” while we were there. It was very kind of them to do that and we thoroughly enjoyed our time with them. 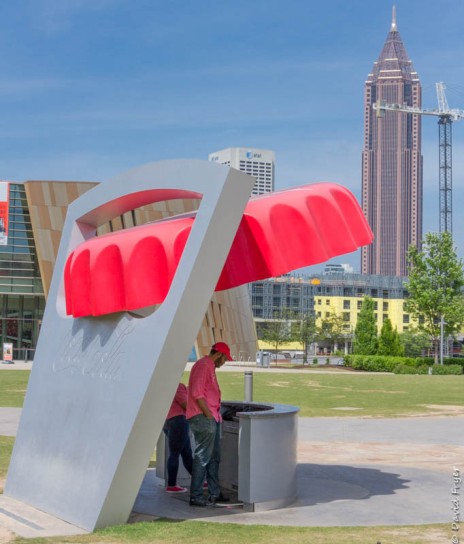 Next we made our way to Atlanta, Georgia. Atlanta will always feel like home even though it has been many years since I lived there. The area has changed tremendously and it is not recognizable in so many ways.

One of the biggest changes is just the sheer number of people who make the metropolitan area home. When I lived there, the Metropolitan Atlanta encompassed three counties. Now, over 22 counties comprise the greater Atlanta area. Whether it is the impressive skyline, numerous company headquarters, or the major international airport, the city is a large vibrant center of activity.

There are many things to do while in Atlanta: the wonderful Georgia Aquarium, the beautiful Atlanta Botanical Garden, the fascinating Atlanta History Museum, just to name a few. While these are all great places, I wanted to be sure to take in an Atlanta Braves baseball game!

The Braves are in their third stadium and I had not been to the newest one, Sun Trust Park. This is the first time that the team does not play in the city itself. The stadium is located in Cobb county now. The new field is impressive and it is worth going just to see the park. We went early for the game so we could take it all in.

The franchise has a very long history and the new park pays homage to the past with multiple displays of the Braves great players, coaches, and managers. Having been a long time fan, even when the teams lost 90 plus games a year, the visit was perfect. I was even at the game years ago, when the then owner Ted Turner, disgusted at how bad the Braves were playing, told those attending that their tickets were good for subsequent free games until the Braves won!

Some teams have a Presidents race or a sausage race, but in Atlanta there is the Home Depot Tool Race.

And what is a Georgia venue without the Waffle House.

One of the Atlanta attractions that we had not been to was the Civil and Human Rights Museum. We had heard that it was an excellent museum so we visited it one afternoon. It is next to the Georgia Aquarium and Coca-Cola Museum in downtown Atlanta. In fact if you park at the Georgia Aquarium, you can receive a discount for that parking deck when visiting the Civil Rights Museum.

The museum has interactive displays on both civil and human rights but also depicts history from an Atlanta perspective. The city was famously known as the “City Too Busy to Hate,” but as you can see it is described on the same panel as the “Temple Bombing” of 1958.

The museum has exhibits on “the lunch counter” sit-ins, the Freedom Riders, transforming sports figures, and Martin Luther King, Jr. plus displays on international human and political freedoms. There is also an extensive display of  Jim Crow laws by state.

There is much history to see here and our visit lasted multiple hours. There are plenty of places close by for a lunch break. The center is sobering and thought provoking and it is well worth the time. 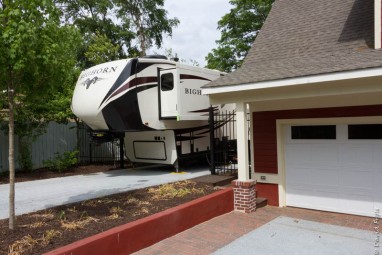 While in Atlanta, we were able to get together with some family and also reconnect with some friends that we had not seen in years. Our friends, Steve and Lee, even had a place where we could park the Bighorn.

Besides spending time catching up, we also went to eat at the famous Dwarf House in Hapeville, GA. This is the original home of the fast food restaurant, Chick-Fil-A. 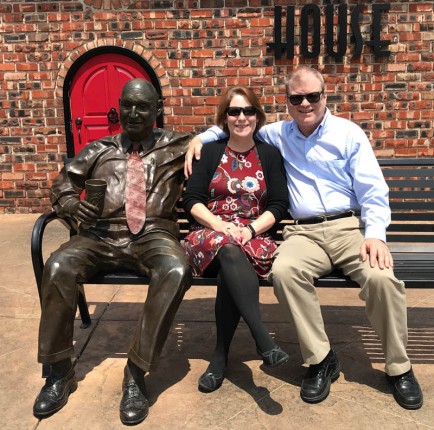 We got to sit by the founder Truett Cathy in front of the restaurant.

The Dwarf House is actually a sit-down restaurant in addition to the typical fast-food. I had to have “chicken and waffles” on our visit and they did not disappoint.

After our visit in the Atlanta area, we leave good friends and head northwest to Chattanooga, TN. We have started a westward journey that will take us to Oregon via Nashville, Memphis, Oklahoma City, Santa Fe, and Denver.

6 thoughts on “Georgia On My Mind – Atlanta”