When I was just a youngster we took one of the few vacations of my childhood that did not involve visiting relatives. Our beloved next door neighbors had moved from Atlanta to Texarkana, AR and we drove out to visit them. On the return trip I spotted the “See Rock City” painted barns and birdhouses. They seemed to be everywhere. We saw them for hundreds of miles. The “See Rock City” barns also touted the attraction of “See Seven States” from the visitors’ perch on Lookout Mountain.

The excitement built with every view of another advertisement along the hundreds of miles. As we finally neared Chattanooga, Dad reluctantly started the climb up the long winding road toward Rock City.I was enraptured with visiting this attraction that was a combination of Disneyland and South of the Border.

When the car was parked Dad said, “Stay in the car I am going to check this out”. My Mom, my brother, and I waited for the verdict. Happiness denied. It was determined that the entrance fee was too expensive for the Fryers to See Rock City. I was crushed.

When we were talking about traveling from Atlanta to Nashville I had the opportunity to make a pilgrimage to the long lost Rock City of my childhood. So being full-timers, we changed our plans and spent a few days in Chattanooga.

We could not have visited Chattanooga at a better time. The rhododendron had just bloomed that week and they were everywhere throughout the Rock City Gardens. There are several trails that you walk along that wind repeatedly through the gardens with names such as Swing-A-Long Bridge, Opera Box Overview, and Fat Man’s Squeeze. 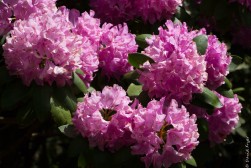 The pathways intermingle with narrow passages, bridges, trees, and the large amounts of rhododendron. There is also some artwork by local artists and an occasional gnome.

The focal point of the walk is the view from “Lover’s Leap” and the “Seven States Flag Court”. A marker reminds you that you can see seven states from this vantage point. There is also a restaurant at this overlook. 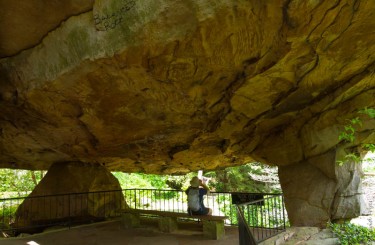 The gardens were Garnet and Frieda Carter’s vision. They opened them to the public in 1932. 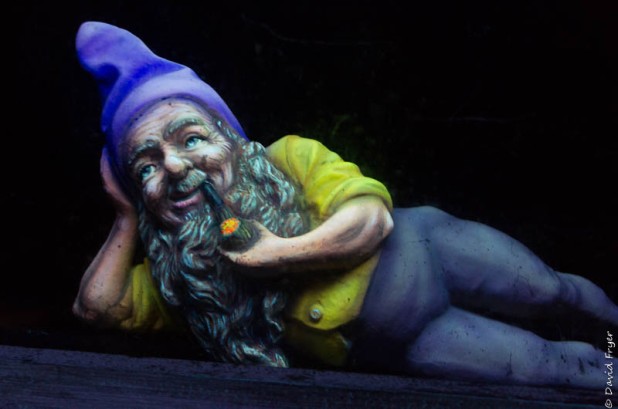 The attraction included “Fairyland,” as Frieda had a longtime interest in European gnomes and folklore. Part of the garden walk today includes a “Fairyland” that is lit by black lights and display gnomes, plus nursery rhyme figures.

The gardens and weather are beautiful this time of year and Celia and I had an excellent visit exploring Lookout Mountain. Later that day we headed into town. 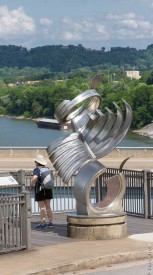 Chattanooga is a fun town to visit with its friendly vibe and art focus. We took the free bus to the “North Shore” and walked the pedestrian bridge across the Tennessee River back to the city. The Walnut Street Bridge is one of the longest pedestrian bridges in the world and a beautiful walk with views of Coolidge Park and the city itself. 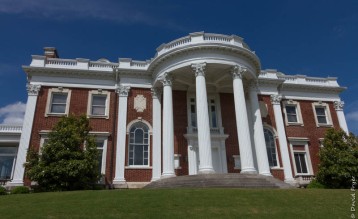 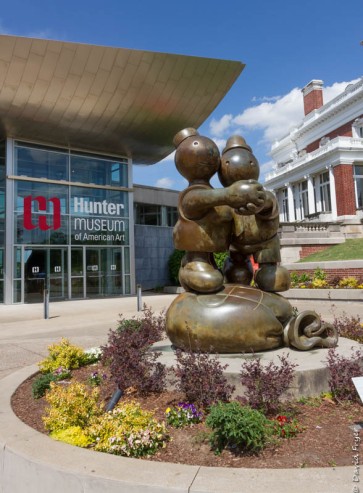 The Bluff View Art District is located at the pedestrian bridge and features a sculpture garden overlooking the river (no pics allowed). The Hunter Museum also towers over the river on the high cliff edge of the city. Just a short walk from the museum is a popular coffeehouse with a nice outdoor patio, Rembrandt’s Coffee House. 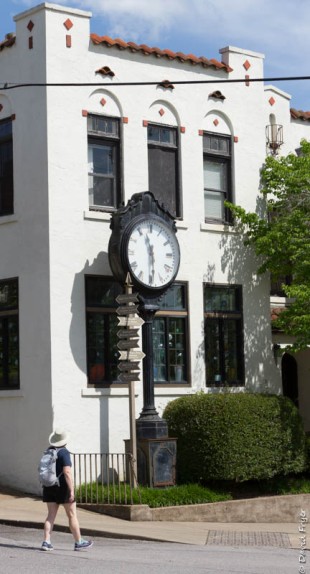 A city free bus (CARTA) also travels across town to the Chattanooga Choo Choo which is now a hotel. We went to check it out the old railroad station and see the historic landmark. 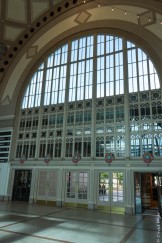 There are plenty of other things to do in Chattanooga including the Tennessee Aquarium, Southern Belle Riverboat, and of course Lookout Mountain.

For me, the most important thing about our time in Chattanooga was that I finally got to visit Rock City! Case closed.