The Magic Valley is an eight county region in the south central part of Idaho along the Snake River. In this area, the largest city is Twin Falls, ID. The Magic Valley was so dubbed by settlers when they realized that the dry desert land could be “magically” transformed into good agricultural land if irrigated. In the early 20th century, Ira Burton Perrine built a series of canals that diverted water from the Snake River resulting in very productive farmland. Today there are vast farms everywhere you look that have massive irrigation systems. Beets, sugar beets, corn, and potatoes are the prominent crops but we also saw many alfalfa and clover fields that supply cattle and dairy ranches.

Heyburn was the first city that we came to in the Magic Valley. It is a small town of about 3,000 residents but it has a great city RV park. We camped at the Heyburn Riverside RV Park. (Thanks to our friends Jim and Jan for the recommendation!) The RV park is small (only 29 campsites) and is on the Snake River. It is adjacent to a well-maintained city park which has numerous walking trails along the riverfront and lovely views of the Snake River. We thoroughly enjoyed our stay there.

About a 45 minutes drive from Heyburn is Twin Falls. This regional city sits atop the south rim of the Snake Canyon and is a hub of activity. This busy town has many major stores and shopping centers.

Founded in 1904, Twin Falls shares its name with the nearby Twin Falls waterfall but the most famous waterfall in the area is the Shoshone Falls. It is often called “The Niagara of the West.” These falls are actually taller and wider than Niagara Falls. The horseshoe-shaped Shoshone Falls plunges 212 feet over a 925 ft. wide cliff and it is spectacular. Often during the summer and fall months, the amount of water diminishes due to lack of rain. This year, however, there is plenty of water and the falls are breath-taking. 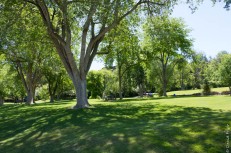 Shoshone Falls Park, managed by the City of Twin Falls, is located on the south bank of the river and affords some of the best views of the falls. There are several overlooks, an interpretive center, a nice shady, grassy picnic area, and a trail that runs along the south rim. If you go far enough, you can hike or bike all the way to Twin Falls. On the way you will pass the site where Evel Knievel tried and failed to jump across the canyon in 1974. Shoshone Falls and the park are a great place to go and spend some time enjoying nature.

In the heart of Twin Falls is the Perrine Bridge that crosses the Snake River Canyon. Opened in 1976, it is a truss arch bridge that is 1500 feet long and soars 486 feet above the Snake River. It is the 8th highest bridge in the U.S. and it honors Ira Burton Perrine who was the main founder of the city. A statue of Mr. Perrine graces the Visitor Center site near the bridge.

At the Visitor Center, we saw many people on the lawn preparing their gear. The Perrine Bridge is a popular BASE (Building, Antennae, Span, Earth/Cliff) jump site. This extreme recreational sport involves jumping from fixed objects. These jumpers free fall and then deploy a parachute and land. This is said to be one of the most dangerous extreme sports because these jumpers, unlike skydivers who have an emergency parachute, only have one parachute and they jump from much lower altitudes. 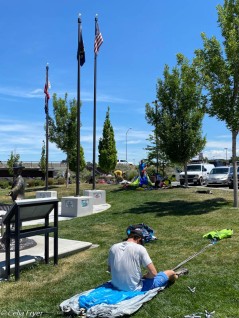 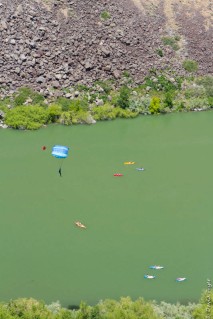 The Perrine Bridge is the only man-made structure in the U. S. where base jumping is allowed year round without a permit. We watched about a dozen base jumpers dive off of the Perrine Bridge and land beside the Snake River below. The locals told us that these base jumpers do this multiple times every day. Some have moved to Twin Falls just to be able to participate in this extreme sport.

This was the first time we had ever witnessed anyone base jumping and, while impressive, neither one of us wanted to give it a try.

The Magic Valley region certainly is a unique area. We had planned to spend more time exploring Idaho and Wyoming this year but alas the coronavirus radically changed our plans and we only got to see a small part of Idaho and none of Wyoming. Hopefully we will have another opportunity to see more in the future because what we have seen so far has been impressive.

6 thoughts on “Snaking through the Magic Valley”