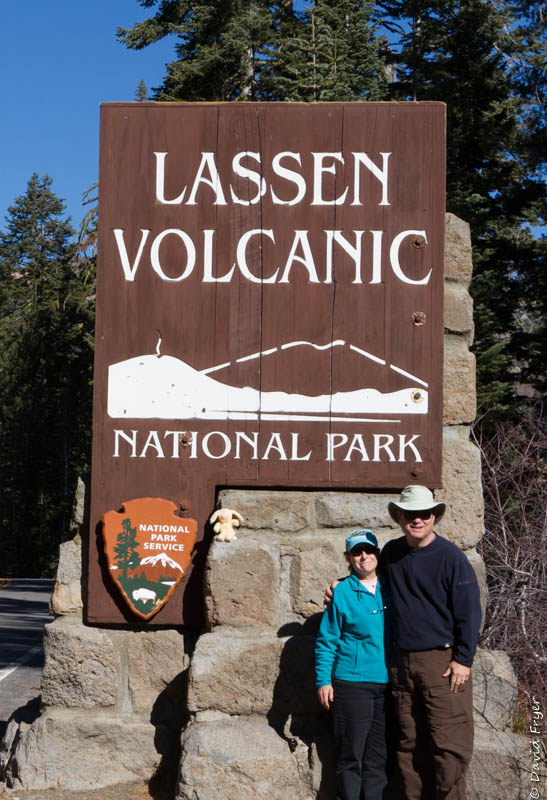 David and I love to visit our National Parks. We have been to many over the years. A couple of years ago, during our first year of full timing, we visited Crater Lake NP in OR and Redwoods NP in CA. We had wanted to go to Lassen Volcanic NP at that time but we did not due to time constraints. Since we are heading to AZ, we decided that we would stop there on our way south. 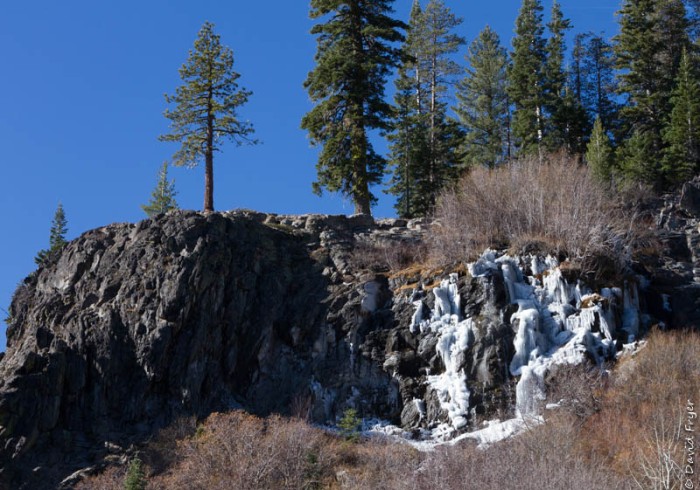 We left Ashland, OR and drove to Susanville, CA. The following day we drove a bit over an hour up to the entrance to the park. On our way to the Visitor Center, we saw a beautiful ice-covered waterfall. It was only the first of many wonders that we saw that day.

Visited by only about a half a million people annually, this National Park is unique because it features 4 different types of volcanoes: plug dome (Lassen Peak), shield (Mt. Harkness, Red Mountain, Prospect Peak, Raker Peak), cinder cone (Cinder Cone), and stratovolcano (Mt. Tehama). To protect and to study this geologic area, President Woodrow Wilson set aside 106,372 acres as a National Park on August 9, 1916. Lassen Volcanic National Park became the 13th National Park in the U.S.A.

Following its designation as a National Park, the park service created 24 miles of trails and built a 29 mile highway that traverses the park. David and I drove the length of the Main Park Highway and saw many volcanoes along the way. We spotted Lassen Peak or Mt. Lassen at different locations throughout the park. Named in honor of Peter Lassen who guided immigrants past the peak to the Sacramento Valley in the 1830s, Lassen Peak is the southernmost volcano in the Cascade Range. Standing at 10,457 ft tall, it is the largest plug dome volcano and has the largest lava dome on Earth.

One of the first areas that we came to was Sulphur Works. As you might imagine given its name, this area smelled like rotten eggs.

The magma system underground heats the groundwater to a boil and then forces it up to the surface through cracks in the earth. Interestingly, Mathias Supan began extracting sulphur from these boiling mudpots in 1865. He dubbed this location and his business Supan’s Sulphur Works. Sulphur Works is one of three main hypothermal areas in the park (Sulphur Works, Bumpass Hell, and Devil’s Kitchen). 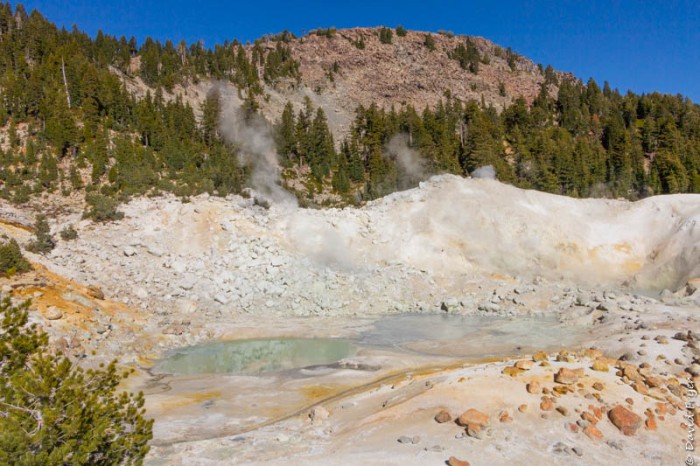 Next, we hiked a three mile trail to Bumpass Hell. This hypothermal area covers 16 acres and has many steam vents, mudpots, and boiling springs.

The name of this section of the park bears the name of Kendall Bumpass, a settler who was the first to see these thermal features. Unfortunately, he stepped into one of the boiling pool and as a result lost his leg. The trail has boardwalks over these hot pools now so that visitors will not suffer a similar fate. The geothermal features that we saw in Bumpass Hell reminded us a lot of our past trips to Yellowstone NP.

In addition to the volcanoes and geothermals, there are also some beautiful glacial lakes that you can visit along the way. We enjoyed a picnic lunch overlooking Lake Helen. Located at about 8,200 ft. above sea level, this lake was named for Helen Tanner Brodt, the first white woman to summit Lassen Peak in 1864. This alpine lake is usually frozen from October to June. We were lucky to see it when it was not iced over; it was a deep royal blue color. The water was so calm that we could see the reflection of Lassen Peak on the lake. It was just breath-taking. 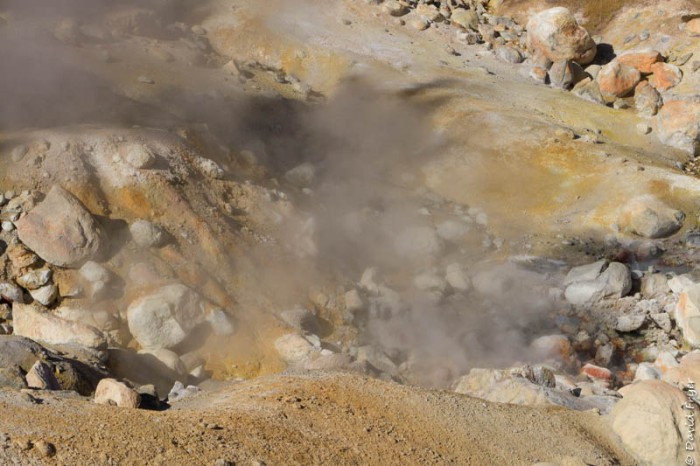 On our way to Manzanita Lake at the northwestern entrance to the Park, we passed through the Devastated Area which still bears the scars of the 1914-1917 eruptions of Lassen Peak. The strongest eruption was in 1915 and it destroyed a 3 mile area. The cloud of ash rose 30,000 ft. in the air and rained volcanic ash on places as far away as 200 miles away. The Visitor Center has black and white photographs that captured the event. This was the first eruption in the lower 48 states since the U.S. became a nation and the last until the eruption of Mt. St. Helens in 1980. It was sobering to see the results of this powerful activity that occurred over 100 years ago.

Manzanita Lake is another place where we saw Lassen Peak’s reflection. A rock avalanche dammed the Manzanita Creek and formed this lake. Today it is popular with fishermen who come in search of rainbow, brown, and brook trout. There is a large campground and museum there too. Since we were there late in the season, the museum was already closed and the campground was about to close in a few days.

Having grown up in Guatemala surrounded by active and dormant volcanoes, these powerful geologic wonders have always fascinated me. Lassen Volcanic National Park brought back many childhood memories. In addition to wonderful vistas of the volcanoes, the weather was just perfect and there were not a lot of visitors there. As a result, the trails and the parking lots were not very crowded and traffic was light. In summer, I am certain, that would not be the case. David and I were so pleased that we got to experience some of Lassen Volcanic NP.